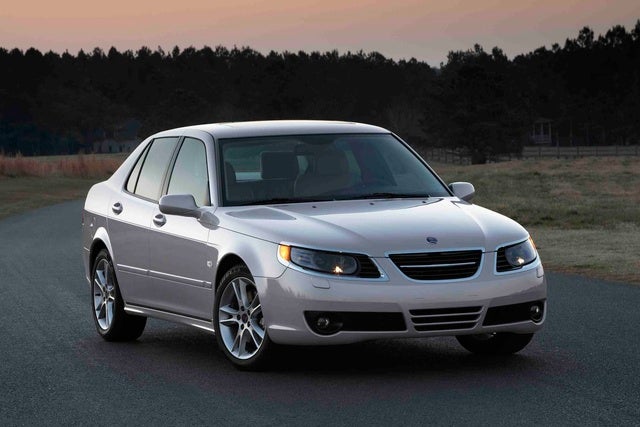 Having seen no significant redesign since its introduction in 1999, the long-hoped-for revamp of the aging Saab 9-5 sedan will likely not arrive until the 2010 model. The 2009 9-5 gets three new exterior colors and revised power switches. The sportier Aero trim rides on new 17-inch, 5-spoke alloy wheels and boasts a metallic black interior.

The front-wheel-drive sedan comes in two trims - the 2.3T and the sport-tuned Aero. Both carry a 2.3-liter turbocharged inline four, with 260 hp and 258 lb-ft of torque at a pleasingly low 1,900 RPM. The 2009 Saab 9-5 does not lack for acceleration power, though the expected turbo lag does exist to some degree. The standard 5-speed Sentronic automatic features three modes: normal, manual, and sport. A 5-speed manual is optional.

The 2009 9-5 exhibits precise handling and responsive braking for superior confidence behind the wheel. It comes standard with ABS brakes, traction and stability control, OnStar, and dual front-side airbags. Side curtain airbags are noticeably absent in this day and age, however. Even so, the sedan earns four and five stars in crash tests.

All trims feature up-to-date technology, with power front seats, a sunroof, heated and cooled seats, leather upholstery, Bluetooth, and a 6-CD changer with satellite radio. Unique to Saab is its ignition switch location in the center console, which takes some getting used to for newbies. The revised power switches located in the same console can also be confusing at first. Options add a DVD-based navigation system, though this moves the CD changer to the trunk. The Aero carries all the same equipment. Its distinguishing features are its sport-tuned suspension, sport wheels, bolstered sport seats, and two-tone leather upholstery.

The 2009 Saab 9-5 comfortably seats four (three in the back seat will feel tight), with generous front legroom and overall good headroom for tall adults. Test drivers mention that seats feel a bit soft and lack support, and the use of plastic downgrades an otherwise upscale sedan. Rear seats split-fold and feature a trunk pass-through/armrest. A wide opening and flat floor ease loading of the 16-cubic-foot trunk.

With decent handling and quick acceleration, the 2009 Saab 9-5 remains a reliable sedan, though poor fuel economy (17/27 mpg), turbo noise, and outdated styling probably won't attract a new customer base. The long-rumored overhaul looks imminent for the 2010 model, so buyers may want to wait a year to get a new Epsilon-2 platform, possible AWD option, and more powerful V6 engines.