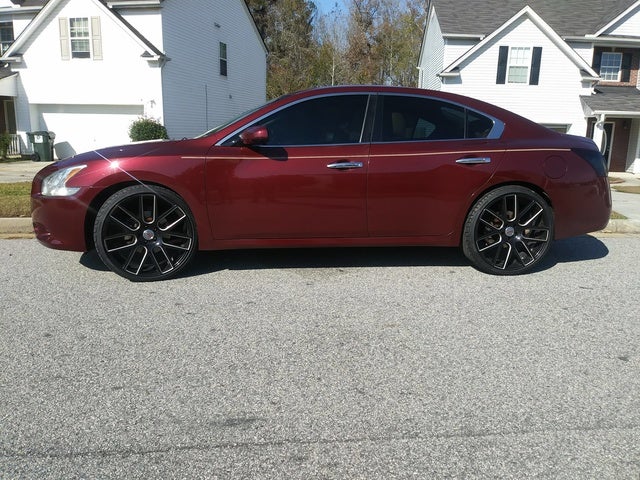 A more distinctive new look and a re-engineered platform finally reunite the 2009 Maxima's sports sedan heritage with its luxury trappings.

Despite its power boost, the heavy '09 Maxima sedan could use a few more jolts of energy, and its large size makes maneuverability and cornering somewhat unwieldy.

The Nissan Maxima has long deserved an overhaul, and the 2009 model takes the first steps in reinvigorating the look and feel of the full-size sedan. With upgrades to the engine and platform, and sharper lines to its profile, the '09 Maxima is once again fun to drive. The only significant drawbacks in this era of high gas prices come from its low fuel economy and premium gas requirement.

No longer hiding in the shadows of the Altima, the restyled, repowered 2009 Nissan Maxima finds its voice as both a truly luxurious and truly sporty sedan. A revised exterior, mainly in the front and rear fascias and lights, recalls the more aggressive snarl of the GT-R. The front-wheel-drive sedan also shaves off nearly 4 inches in length and sits on Nissan's new D platform, to tighten up overall handling. Combined with a much needed horsepower boost and revised transmission, the reinvigorated '09 Maxima hits the road with a livelier spirit, knowing when to stay calm in city driving, but also when to let loose on the highway.

The 2009 Maxima keeps its two trims, but changes their designations. The old base SL is now simply the S, while the former SE becomes the sportier SV (sport seats, rear spoiler). Though the length and wheelbase have shrunk, extra inches in its width maintain the Maxima's roomy interior, which gets a reworking in '09, making controls more accessible and less distracting to the driver. Other additions for 2009 include standard push-button ignition, larger 18-inch alloy wheels, a revised optional navigation system, and a new two-panel sunroof to replace the old Skyview.

Once considered nothing more than a pricier Altima, the refreshed Maxima now breaks away from the pack and gives consumers looking for a combination of sedate luxury with a splash of excitement a reason to pay a bit more.

Branded with the 4DSC (four-door sports car) badge when first introduced, the front-wheel-drive '09 Maxima can finally lay claim to that moniker. Both S and SV trims get a new VQ 3.5-liter V6 that adds 35 more horsepower over last year's engine, for a total of 290 hp and 261 lb-ft of torque at 4,400 RPM. This reduction in body dimensions helps the full-size sedan reach 0-60 in just under 5.8 seconds, though its 19/26 mpg remains unimpressive for the Japanese automaker. Early test drives reveal immediate acceleration and throttle response, with no hesitation when passing on highways.

The old and popular CVT (continuously variable transmission) returns as a three-mode Xtronic CVT, delivering smooth, seamless shifting. Its new manual mode lets the driver feel a part of the process and can be operated via a regular gearshift or paddle shifters on the steering wheel. However, with this extra engine power, some drivers might wish for an actual manual transmission, as the imperceptible transitions of the CVT tend to take away that feeling of driver control when switching gears. The three-mode system mimics twin-clutch systems in other sportier cars, able to accommodate controlled city driving as well as more carefree highway cruising.

Nissan's new D platform, based on that found in the Altima and Murano, along with a reinforced chassis and a 1.5-inch wider stance, improves handling tremendously in the '09 Maxima. The full-size sedan sheds 3.8 inches in length and 2 inches in the wheelbase, with the result being a more solid, more controlled ride overall. Test drives found minimal body roll and confident road grip, although the full-size nature of the Maxima results in a wide turning radius.

One of the biggest improvements addresses a common complaint with past Maxima models. Torque steer, the tendency of the car to pull to one side upon acceleration, has been greatly reduced in this reworked '09 model. One reviewer claimed he could take his hands off the steering wheel when accelerating from a stop, with the Maxima maintaining a straight course.

Overall, test drives found steering much more precise and less vague than previous years. A reinforced chassis noticeably absorbs the bumps and potholes of city driving to deliver a smoother and more comfortable ride, while the V6 engine and new 18-inch tires create little noise pollution for passengers. The only evident noise came from wind during highway driving.

For those desiring a more direct interaction with the road, a Sport Package for the SV replaces the new 18-inch alloy wheels with 19-inch wheels and adds a sport-tuned suspension. It improves road feel, but augments bumps and jolts. Bolstered sport seats somewhat mitigate the stiffer ride. A rear spoiler, paddle shifters, and xenon HID headlamps complete the Sport Package.

As Nissan’s flagship luxury sedan, the '09 Maxima piles on the creature comforts. The base S model offers a full array of power features, including an 8-way power driver's and 4-way power passenger seat. Push-button ignition and remote entry get rid of the need for those pesky keys. Heated leather front seats are complemented by wood and leather trim, but some reviewers found that the cheap hard plastic material on the dash and compartments detracts from upscale intentions. Many owners find the 8-speaker Bose sound system a perfect complement to the standard 6-CD changer with MP3 interface.

Plenty of options add memory settings, heated rear seats, a navigation system with real-time traffic, Bluetooth, an iPod jack, and a 9.3-GB hard drive. A Premium package offers a helpful rearview camera and accommodates rear passengers with their own climate and audio controls. Two sunroof options are available – a regular-size moonroof or a two-panel one that consists of a tilt-and-slide front panel and a fixed rear panel.

The reworked interior mimics a cockpit with dual pods for driver and passenger, a sporty three-spoke steering wheel, and electroluminescent gauges. Front passengers in the SV trim get bolstered sport seats for a firmer ride. The gear shift and instrument gauges have been moved more towards the driver, for easier access and better readability. With nearly 44 inches of legroom, front passengers benefit the most from the roomy interior, and the power front seat controls adjust both lumbar and thigh support. Rear passengers suffer a bit with only 34.6 inches of legroom.

Seats split-fold 60/40, except in the Sport-packaged SV, which comes with a reinforced and more rigid back panel. While it limits cargo flexibility, it does offer a trunk pass-through for smaller objects. With the smaller dimensions, trunk size has been reduced to 14.2 cubic feet, but the Maxima continues to offer many interior compartments, storage consoles, and a quite large glovebox.

Though not yet tested by the NHTSA or IIHS, the 2009 Maxima comes loaded with safety features. The new large Brembo brakes stop on a dime, reinforced by 4-wheel ABS and electronic brakeforce distribution. Its top-notch road grip can be credited to the larger 18-inch wheels with all-season tires and standard traction and stability control. In the airbag department, the '09 Maxima provides dual front, front-side, and side curtain bags for both rows, with front airbags featuring dual-stage deployment. Optional parking sensors and a rearview camera help clear up any visibility issues. Automatic headlights come standard, with the option to add auto-dimming mirrors and HID xenon headlamps.

CarGurus drivers find little to fault with the revised '09 Maxima, with the majority of reviews focusing on the higher-end SV trim. On the handling side, the sedan receives multiple compliments for its responsive acceleration and sporty ride, with particular praise going to the smoothness of the CVT. Owners love the combination of its GT-R looks and feel with the more upscale luxury attributes associated with previous Maxima models.

The long list of standard and optional features more than satisfies owners, with the Bose sound system, iPod interface, premium leather seats, and dual-pane sunroof earning the most raves (although the Bose got an equal number of negative reviews). Drivers appreciate that the more aggressive styling of the front and rear fascia help the '09 Maxima stand out in a crowd better than previous versions, making the overall package as easy on the eyes as it is to drive.

Alonzo hard ride on the suspension when hhuitting a pot hole

Have you driven a 2009 Nissan Maxima?
Rank This Car

How do I do CarGurus pay for private sales

How Do I Pay A Private Seller

How do I pay a private seller

43 views with 1 answer (last answer about a year ago)

Only My Driver Side Window Will Roll Down

My driver side window will roll down but not the rest. Even if I even if I try the one on that door.

141 views with 3 answers (last answer about a year ago)

I have an 209 Maxima. My car Temperature is going up and down after a while when I drive. I had the thermostat and the water pump changed along with the temperature sensor and I am still having the...