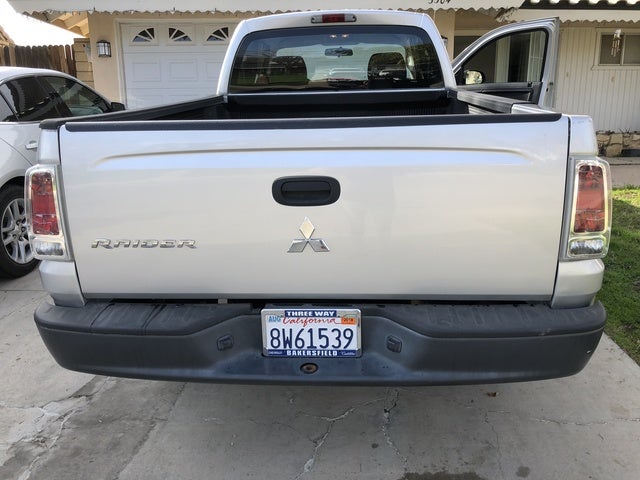 The 2009 Mitsubishi Raider certainly fits into the manufacturer’s line in terms of unique and appealing looks – bulging fenders, an aggressively gaping grill, tubular steel sidesteps, available parabolic foglights complimented by stylishly square halogen headlights. And if you’re in the market for a truck that handles like a car, the Raider is certainly worth a look. The truck – which borrows heavily from the midsize Dodge Dakota – also offers ample towing (maximum capacity between 2,950 and 4,100 pounds, depending on trim). But if you want a monster under the hood, this may not be your truck.

All Raiders come with 40/20/40 three-passenger front seats with two headrests. The Double Cab is advertised as a three-passenger rear seat as well, but it’s probably better suited to two passengers, and the Extended Cab’s rear certainly won’t be comfortable for three adults. Overall, however, it is a spacious cabin, and the rear seats for both body styles fold up to reveal built-in storage.

Air-conditioning, a four-speaker audio system with CD and an auxiliary jack, and tinted glass are the most prominent features that come standard on all trims. Power windows and locks, cruise control, and a height-adjustable steering wheel are all standard for the Double Cab and optional for the Extended Cab.

Airbags for the front seat and antilock braking are both standard for the Raider, but there aren’t any other safety features that really jump out at you. However, the Raider earned the maximum five stars in the National Highway Traffic Safety Administration’s frontal crash test for the driver and passenger, five stars for both driver and rear passenger in side crash testing and four stars for rollover resistance.

What's your take on the 2009 Mitsubishi Raider?

Have you driven a 2009 Mitsubishi Raider?
Rank This Car