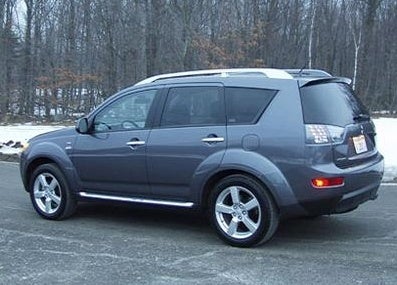 The 2009 Outlander, Mitsubishi’s entry into the small crossover market, is very similar to the version released in 2007, when it was significantly redesigned. The Outlander’s frame is a result of Mitsubishi’s partnership with Chrysler and the same as that used for the Dodge Caliber and Chrysler Sebring. A bit larger and more stylish and with a measurably stronger standard inline-four engine for the ES and SE trims than pre-redesign models, the 2009 Outlander represents one of the top values in its class. It's offered in three trim levels - ES, SE, and XLS - with either front- or all-wheel drive. It offers some 76.2 cubic feet of cargo space with the rear seats folded flat.

Optional equipment for the ’09 Mitsubishi Outlander features, among other things, a power sunroof, six-disc CD/MP3 player and upgraded speakers, and alloy wheels for the ES, as well as a navigation system, DVD rear-seat entertainment, and full-leather front- and second-row seating for the SE and XLS trims.

Owners of the ’08 Outlander report a significant noise level in the cabin and some bemoan the lack of more standard features in the ES trim as well as the lack of an available back-up sensing system. On the other hand, most owners are quite pleased with the mileage they get in their '08s and find the ride quality, handling, and braking outstanding. Both interior and exterior styling is another plus mentioned by Outlander drivers.

What's your take on the 2009 Mitsubishi Outlander?

Have you driven a 2009 Mitsubishi Outlander?
Rank This Car

Hi I have a 09 outlander and ounce in a while my car won't start just makes a clicking noise and all the interior goes out. I've jumped it a few times and it ended the problem temparery but now it'...

Do You Have A Replacement Ignition Key?

Is The 2009 Mitsubishi Outlander Dependable?

I am looking at a 2009 mitsubishi outlander and wondering if anyone has had problems with this car.

How To Remove Window Deflectors For Mitsubishi Outlander

I have window deflectors that were installed at the dealer and want some idea how to take them off before I start the process. Thanks!