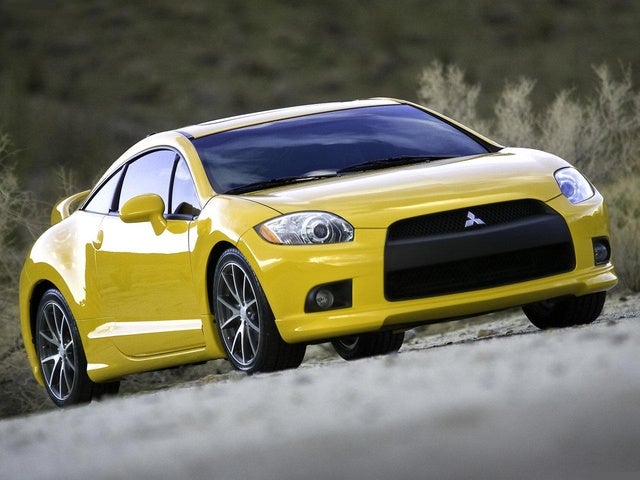 For Mitsubishi's Eclipse, 2009 brings a styling refresh that has seen positive reception overall, as well as the car's usual standards of a sporty V6, smooth transmissions, and fine road handling.

The '09 Eclipse is a poor performer on anything other than smooth, dry surfaces, and the base engine is inadequate, especially with the automatic.

Buying a Mitsubishi Eclipse has always been an exercise in sacrifice. Many other cars offer better performance, more utility, and a lower price, but if the Eclipse's styling is to your taste, none of that matters. For performance sake, the V6 is necessary, but it badly impacts the balance in a car that already suffers from sketchy handling.

2009 marks the 20th anniversary of the Mitsubishi Eclipse, and to commemorate the event, it has received a slight refresh to the exterior, including a blacked-out center grille/bumper/intake combo as well as a similarly blacked-out lower bumper section out back that visually lightens the entire rear. The rear wing has also been redesigned. Additionally, the SE and SE-V6 trim levels have been deleted, and the GT model gets standard stability control and a dual-exhaust setup that delivers a power increase.

The Eclipse is available in two trims, GS and GT, with two engines and transmissions for the two-door sport coupe. The front-wheel-drive design is centered on its sport aspirations and competent if inconsistent suspension. 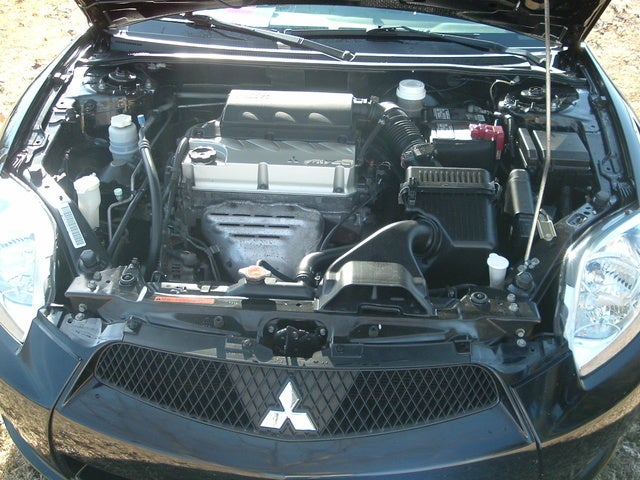 GS and GT trims both get their own unique engine, with the GS trim powered by a 2.4-liter, 162-hp inline four cylinder and the GT getting a 265-hp, 3.8-liter V6. Both trims receive standard manual transmissions, a five-speed for the GS and a six-speed for the GT, with a four-speed automatic optional in the GS and a five-speed automatic optional in the GT. The difference in speed and power between the two engines is noticeable, although neither lacks power when mated to the manual transmission. 0-60 times are 9.2 seconds for the 2.4 and 6.5 seconds for the 3.8.

However, with the automatic, the 2.4 is a bit sluggish at highway speeds, requiring absolute flooring of the accelerator to achieve passing power. That said, the Sportronic mode is a welcome addition, giving manual control over gear selection in the automatic. Manual-equipped GSs have EPA estimates of 20/28 mpg, while automatics achieve slightly less at 20/26. GTs with the manual transmission achieve 16/26, while the automatic does a bit better at 17/26. Mitsubishi recommends premium fuel for the 3.8.

Both engines are quite noisy at high RPM, but only the 2.4 ends up sounding ragged when taxed.

The Eclipse’s short wheelbase and firm suspension make for a confident ride on smooth pavement, and a shaky ride in nearly all other conditions. While grip is substantial and body lean minimal, the Eclipse’s composure over rough surfaces leaves a lot to be desired, especially with the 18-inch wheels. Interestingly, the GS has been noted by reviewers as being better balanced than the GT.

What is very surprising is the Eclipse’s rather large turning radius, unexpected for such a small and sporty vehicle. Brakes are strong and pedal feel is firm, though. Watch for torque-steer under hard acceleration with the GT. 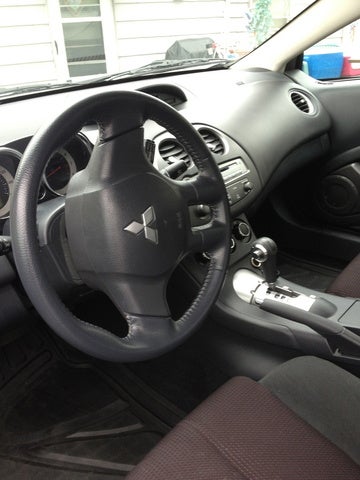 Sadly, neither 2006’s complete redesign or this year’s slight refresh has addressed one of the biggest complaints regarding the Mitsubishi Eclipse, which is an interior that is peppered with cheap, hard plastics. Taller drivers may find an issue with headroom, while shorter drivers may find pedals and even some controls a long reach.

Seats, however, are both comfortable and supportive, if a bit low, and low doors make entry and exit a bit of a chore. Predictably, rear seats are symbolic at best, suitable only for children or inanimate objects. Additionally, road noise intrudes in the cabin, especially from the tires.

Complaints aside, the Eclipse's interior styling has been well-received, despite being four years old, and the controls are generally well-placed and convenient. An illogical choice was to place the audio display on top of the dash, too far from the controls, creating a dangerous driving situation when making adjustments.

NHTSA ratings for the 2009 Mitsubishi Eclipse are not currently available.

Owners have always been pleased overall by the looks of the Eclipse, and both the major redesign in 2006 and the refresh this year have been well-received. When it comes to performance, the Eclipse has never been a great value for the money, and the fit and finish have been nothing to brag about. However, especially with the GT’s V6, performance isn’t poor, and the handling is a big positive, as long as you’re on dry, smooth pavement.

What's your take on the 2009 Mitsubishi Eclipse?

Have you driven a 2009 Mitsubishi Eclipse?
Rank This Car

What Engine Should I Swap To

Which engine should I swap my 2009 4 cylinder Mitsubishi Eclipse with?

Hello I Need A New Car Now Hello This Is Tammy Lynn Barnes I Need About 100...

Where Is The Fuel Pump Cut Off Switch In A 2009 Mitsubishi Eclipse GS?

My friend's car will not start now. He wants to take out the GPS the dealership built into it. I think he seems to think that is the problem. He called someone from Mitsubishi and they told him to f...

A car listed with no accidents in pictures clearly shows damage. Compare the left side to the right side. Shame! what else is fake about that posting the mileage also. Only 3 pictures total. Rate 1-...