Plenty of room for family and friends, the security of a worry-free safety record, and a substantial list of upscale standard features make the 2009 Mercury Sable a great value for the money.

Bland styling keeps the '09 Sable incognito on the road, while a noisy engine detracts from an otherwise smooth and comfortable ride.

Ideal for families, the 2009 Sable won't win any drag races, attract adoring eyes with its conservative looks, or deliver dynamic thrills, but it does offer a solid, well-built, and roomy ride. Its large size and storage-friendly interior appeal to parents and road-trippers, while a strong engine and smooth handling impart confidence on the road. Poor city mileage takes away from any commuter-car aspirations, however.

Ford's full-size sedan, the Mercury Sable, got all of its styling and performance updates out of the way last year as the rebadged Montego and returns as a carryover for 2009 with only minor changes. Sharing its mechanics with the less upscale Ford Taurus and its platform with the Volvo S60 and XC90, the 2009 Sable comes in Base and Premier trims, both available with front-wheel or all-wheel drive. (Its all-wheel drive is intended only to provide extra grip in slippery driving situations and not for off-road performance.)

For 2009, the Sable adds electronic stability control to the standard equipment list on both trim levels, while the Premier also gets backup sensors and satellite radio. A new optional Voga Package for the Premier sports things up with large 18-inch chrome wheels, unique badging and color choices, and cashmere trim for the interior. To improve on its already superior five-star safety ratings, the Sable includes a new SOS Post-Crash Alert system that facilitates emergency response after a crash.

With its roomy trunk and cabin and strong safety record, the '09 Sable remains a solid and conservative family car, backed by a strong set of standard features and a powerful engine. Though it doesn't fall high on the excitement meter, the 2009 Sable offers a comfortable and effortless ride. 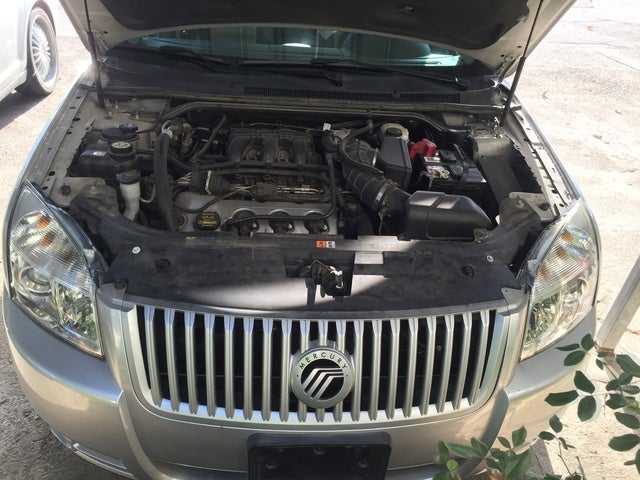 A 24-valve, 3.5-liter DOHC V6 engine provides just enough power for this large sedan's needs, neither too sluggish nor particularly speedy. Clocked at just over 7 seconds to go from 0-60, the V6 puts out 263 hp and 249 lb-ft of torque at 4,500 RPM, and its 18/28 mpg rating seems decent for a full-size sedan. All-wheel-drive trims drop fuel economy to 17/24. A six-speed automatic with overdrive is the only transmission, and one critic finds it disappointingly slow to downshift, interfering with a strong and confident delivery of power. The engine tends to struggle noisily during high-speed acceleration as well.

The 2009 Sable rides on a fully independent Macpherson strut front and multilink rear suspension, which provides a comfortable, smooth, and predictably floaty feel on the road. Test drives reveal good bump absorption and little harshness. Power steering adds to the effortless driver experience, with little feedback or weightiness. Further removing the driver from any direct interaction with the road is the Sable's high seat.

At 202 inches in length, the full-size Sable surprises critics with its responsive handling and maneuverability, along with good stability when cornering. However, one critic notes that its large profile does tend to exhibit body roll when taking curves at high speeds. The disc brakes disappoint reviewers, who find them soft and spongy, requiring a longer-than-necessary stopping distance. The 16-inch wheels on the Base and 17-inchers on the Premier seem well suited to the sedan and offer good road grip. Owners love the way the AWD function tackles snow and ice. The automatic system distributes torque to the rear wheels when needed, but is not designed for off-road use or overly soft surfaces such as sand.

The V6 engine proves plenty powerful, although its clunky downshifting does add a bit of challenge in passing situations. Engine noise when accelerating can intrude into the cabin, but wind and tire noise has been kept to a comfortable minimum.

The Sable is nothing if not big, and it boasts class-leading front and rear legroom, with more than 41 inches for both. Four adults can not only fit easily, but can stretch out their legs comfortably. Its 39 inches of headroom get slightly reduced with the addition of a sunroof. Three passengers can technically fit in the back seat, but may feel hemmed in. The rear bench split-folds 60/40, allowing a pass-through into the expansive 21.2-cubic-foot trunk. A wide-opening lid eases loading and unloading. Objects up to 9 feet long can be accommodated by the fold-flat front passenger seat. A cargo net comes standard with the Premier.

Test drives reveal comfortable and supportive seats in both front and back, with the Premier adding soft leather upholstery with a heating function for front-seat passengers. High seats and an expansive windshield maximize driver visibility, and rear passengers also get a good view thanks to stadium-style seating. On the downside, one reviewer says the high ride height detracts from driving dynamics, further disconnecting the driver from any direct interaction with the road.

The steering wheel tilts, but does not telescope, and moving up to the Premier gets you convenient wheel-mounted audio and cruise controls. The dash feels ergonomically intuitive to most owners, but one critic complains about the low placement of many controls, just out of convenient reach for the driver. Base models feature a 6-way power driver's seat with manual lumbar adjustment and a 2-way power passenger seat. The Premier ups those settings to 8 and 4 respectively and adds a memory function for the driver's seat and mirrors. Optional power-adjustable pedals aid shorter drivers.

Both critics and owners find the interior fit and finish upscale, if a bit a bland. The soft-touch plastic materials do not look cheap or shoddy, and the '09 Sable provides a decent amount of cabin storage, including a small glovebox, a center console, front and rear door pockets, and eight cupholders.

Being an upmarket sedan, the 2009 Sable Base trim does not skimp on standard features. Owners agree that this family sedan represents a great value for the money spent, since it offers power windows, locks, and mirrors, power front seats, cruise control, remote entry, leather trim, and a 4-speaker sound system with a CD player and MP3 jack. Anything left out can be found in the Premier, with its heated leather seats, heated mirrors, garage opener, and a 6-CD changer with satellite radio. The Premier also features the cutting-edge SYNC system, a hands-free phone and music interface that integrates Bluetooth, navigation, and audio systems and utilizes voice commands. Most of the Premier's equipment can be added to the Base, and other options include a sunroof, a DVD player, voice-activated navigation system, an upgraded 7-speaker sound system, and wood trim.

A family-oriented focus on providing a safe and solid ride remains one of the best features of the '09 Sable. It consistently receives five stars in both frontal and side impact tests and four stars in rollover tests from the NHTSA. New for 2009, stability control joins the list of standard safety equipment for all trims. This means all Sables feature traction and stability control, 4-wheel disc and ABS brakes, and emergency brake assist and electronic brakeforce distribution. Dual front-side airbags come with passenger airbag cutoff sensors, and side curtain airbags for both rows feature rollover sensors.

A tire monitor measures pressure in the standard 17-inch wheels. Foglights are standard across the line, with the Premier adding automatic headlights and an auto-dimming rearview mirror. The Premier also offers backup parking sensors to help with any visibility issues caused by driving a full-size sedan. A new addition to the Sable safety profile is its SOS Post-Crash Alert system. In the event that airbags are deployed during an impact, the sedan automatically unlocks all doors, turns on the flashers, and sounds the horn.

The roomy cabin and oversize trunk of the '09 Sable impress most owners, particularly those with kids. One driver says his three kids can fit in the back seat without feeling hemmed in, and the trunk holds an unbelievable amount of cargo. The spacious interior is complemented by comfortable seats and a smooth and quiet ride. Several owners mention the Sable's outstanding performance in snow when equipped with all-wheel drive. Good engine power, a solid safety record, and a boatload of features at an affordable price help make the Sable the most popular Mercury vehicle on the road. Special mention goes to the handy SYNC system. The only consistently mentioned downside seems to be its fuel economy, which gets mixed reviews from owners.

No reviews yet from CarGurus owners, but the essentially identical 2008 model earns praise for its passenger and cargo capacity and comfortable ride. Handling feels solid, though somewhat conservative.

Have you driven a 2009 Mercury Sable?
Rank This Car

I am concerned about how many more miles I can get from this car, with such high miles on it. Anyone out there know if they can go over 235,000 miles with no major problems?

Where Is The Location Of The A/C Evaporator Drain Under The Car On My Mercu...

My passenger floorboards and carpet are soaked after it rains (most of the time) but not all. It also travels to the back. Checked the Sunroof drains and passenger side windshield, which seems to be...

2009 Mercury Sable Has A 5 Month Old Battery-dealer Kept For A Week Ran Dia...

I am concerned about how many more miles I can get from this car, with such high miles on it. Anyone out there know if they can go over 235,000 miles with no major problems?

Knocking Noise From Air Vent Before Turning A/c On

I get a loud knocking or ticking from inside passenger side dashboard when I start the car. Noise goes away immediately when I turn the a/c on. Any repair suggestions?