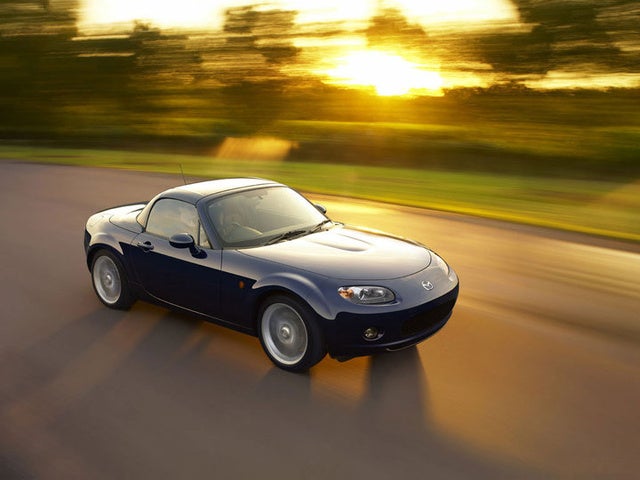 The 2009 Mazda MX-5 Miata remains reliable, affordable, safe, and attractive and still provides world-class handling while getting a handful of refreshing upgrades.

There isn’t much room for anything extra in the '09 MX-5 Miata, whether it’s luggage in the trunk, storage in the cabin, or size in the driver or passenger.

The 2009 Mazda MX-5 Miata provides wonderful feel and response for driving enthusiasts, even if it doesn’t have the raw power of others in its class. And with a revamped design that includes a marvelous retractable hard top, it still carries a significant “wow” factor without a significant price.

The 2009 Mazda MX-5 Miata didn’t get redesigned (why fix one of the best-selling sports cars of all time?), but it did get refreshed on many levels. The most significant changes are on the exterior, and the emphasis there is in the front end, with new headlights angled down and the old oval-shaped grill reworked into a five-point, rounded design similar to that of Mazda’s RX-8. A view from the side will reveal redesigned sills, and a rear view will show you new taillights and rear-wheel fender bulges.

The MX-5 Miata also received upgrades in the suspension and powertrain, improved sound-deadening materials, new wheel designs, and some revision of the interior. But don’t worry, this is still the same fun-to-drive, reliable, and affordable two-seat roadster that has pleased owners and critics for two decades. 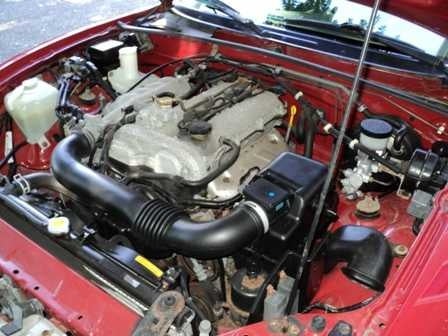 The MX-5 Miata packs more power in 2009 with its 2.0-liter (up from 1.8), DOHC four-cylinder, 16-valve engine. This engine can produce 166 hp at 6,700 rpm and 140 lb-ft of torque at 5,000 rpm. This is not a monster under the hood, but variable valve timing and variable induction help offset any acceleration lag and provide power across a range of speeds. Changes have also been made to the crankshaft, pistons and valve springs.

Both the five- and six-speed manual transmissions are enhanced by a short-throw shifter, adding yet another element of fun to the MX-5 Miata. The optional automatic transmission can be controlled by a shift lever or shift paddles on the steering wheel. All trims are rear-wheel drive.

The five-speed manual transmission gets 22 city/27 highway mpg, the six-speed manual gets 21/28, and the automatic 20/27. The MX-5 Miata requires premium unleaded gas of 91 octane or higher.

This is where the MX-5 Miata shines. Wind this vehicle along a back road, and you can feel its response through the steering wheel and seats, and very likely you’ll want to revisit that back road again and again.

The lightweight design, the 50/50 distribution of that weight (including the driver) between the front and rear, and the weight concentrated around the center of the chassis provide for much of the Miata's superb handling. The front suspension is a double aluminum wishbone with a mono-tube shock absorber for lower, un-sprung weight, the rear suspension is an update on the multilink RX-8's design, and the front and rear shock absorbers are both gas-filled.

The power-assisted rack-and-pinion steering is ultra-responsive and quick, allowing you to reliably change direction with ease. The short-throw shifter is also easy, moving between gears lightly with the small lever snug in your hand. The I4 engine hums almost musically as you shift and rev with comfort, and despite the car’s size, there is very little excess cabin noise.

Go to almost any review for the MX-5 Miata to find glowing praise about its handling, but Car and Driver perhaps summed it up best by saying that after driving this car, “you’ll find yourself wearing a smile.”

The Miata's gauges are all appropriately analog, with a large, circular speedometer and tachometer at the center, giving the MX-5 Miata more of that sports-car feel. The three-spoke steering wheel provides clear sight lines to those gauges and can come with built-in controls for the audio system and cruise control.

The interior surfaces are mostly hard plastic (the Grand Touring model includes leather trim), but they don’t look or feel cheap and are a clear upgrade over past MX-5 Miata interior materials.

Cloth upholstery for the seats is standard for the SV, Sport, and Touring, while the Grand Touring and Special Edition offer leather upholstery. The seats aren’t exactly plush, again fitting with sports-car tradition, and while the driver’s seat is height adjustable, anyone over 6 feet tall may feel cramped while driving.

Cargo space is, naturally, limited, with just 5.3 cubic feet available in the trunk, although that is up from 5.1 from 2008. There are compartments behind each seat, a lockable center-console storage area, and a midsize glovebox.

It is worth noting that the base SV trim does not come with air-conditioning, cruise control, or power locks. On the other end, it’s difficult to push the price tag over $30,000 no matter how many options you add. And the seven-speaker Bose sound system that comes standard with the Grand Touring and Special Edition trims is outstanding, especially for a convertible.

All of the MX-5 Miata's safety features come standard with all trim levels, except the anti-theft alarm system, which is available only in the Special Edition. But the dual front airbags with a passenger deactivation switch, engine immobilizer, side impact airbags, side impact door beams, three-point safety belts with pretensioners and force limiters, and a tire pressure monitor system are all standard for all trims.

Owners love commuting in a sports car that makes driving to work fun without guzzling gas. But even more than that they love just how reliable this car is, a common theme for the entire history of the vehicle. And finally they love the price, which is practically impossible to beat in this category.

Taller owners have a hard time finding comfort in the front seat, but really, that’s to be expected after simply looking at the MX-5 Miata. There are also some complaints about a lack of pure speed, something that competitors like the Honda S2000 or the Nissan 350Z have plenty of, but again, the MX-5 Miata is more about handling the curvy roads than it is about blazing down the straights.

If You Sell Offsite Do You Still Owe $99?

Not Smooth Shifting. Hard To Shift Cold From 1-2.

Just bought a 2009 GT Hard Top 42K miles, and the gear box is not smooth. It is hard to shift into 2nd gear. Better as it warms up. Noisy rear bearing will be replaced but should all clutch be RR wi...

Is 13.02 A Appropriate Volt Reading For My Alternator

my alternator reads around 13.02 when running, under a load its about the sae, is that an acceptable volt reading or is it low

Just Wanted To Know When Our Car Will Be Listed And For How Long?

Just listed our car! Just want to know when it will be listed and for how long?

My Mazda MX5 Will Not Start. If Jumped It Starts But Turn It Off Again And...

Plus about 5 lights light up.