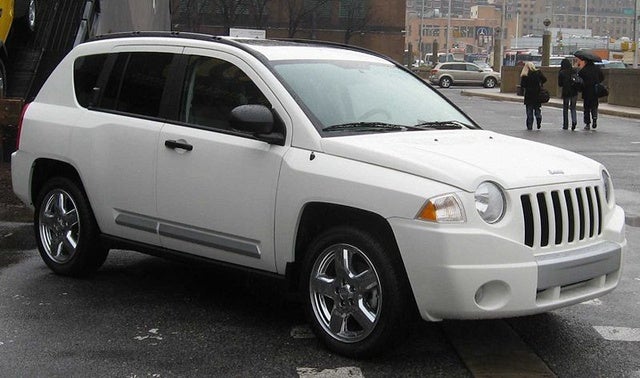 Uncomfortable seating and lackluster engines take the '09 Jeep Compass in a direction few are willing to explore.

Jeep's 2009 Compass is severely underpowered, and the styling is attractive to some, ugly to the rest. That said, its interior has been nicely redesigned, its suspension is comfortable, and its fuel economy isn’t bad. Unless you really want a Jeep, go with the Dodge Caliber and cut out the pretension.

This compact/economy SUV from Jeep shares its platform with the Dodge Caliber, and predictably, the Jeep Compass rides like a tall car. Seating five, the Compass comes in four trims: Sport or Limited with front- or all-wheel drive, with two engine options.

As Jeep seeks to slim its model lineup, rumors have been heard that this could be the last year for the Compass, a model only introduced in 2007. 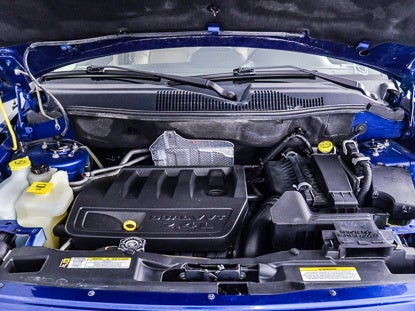 A 172-hp, 2.4-liter inline four-cylinder engine is standard on both Sport and Limited trims of the Compass, and a 158-hp, 2.0-liter four is available on Sports equipped with front-wheel drive and the optional continuously variable automatic transmission. A five-speed manual is standard and helps quicken things, but you’ll still not be impressed with the performance from either engine. Both are sluggish from a start and strain to pass or climb. A 2.4 with a manual transmission and AWD barely beats 9.5 seconds in a 0-60 run, for instance.

Still, at least you should be pleased with the fuel economy, especially from what is still an SUV, albeit a compact one. 2.4-liter engines equipped with the manual get 22/27 mpg, and 21/24 when mated to the CVT. 2.0-liter engines, available only with the CVT, lead the pack with 23/27. All engines run on regular-grade gasoline.

The available Freedom Drive option transfers power to the rear wheels, up to 60%, when in slippery conditions. A low-range gear with a locking rear differential is also available for off-road use, but with the Compass’s low clearance, we have to wonder whether that makes sense.

While essentially a tall car, the Compass does fall victim to many of the pitfalls that plague compact SUVs in general and Jeeps in particular. Its MacPherson front and multi-link rear suspension is stable and comfortable, but not overly aggressive, and will still produce float and shudder over bumps and uneven pavement. Because of its taller and Jeep-ish profile, the Compass is susceptible to crosswinds as well as lean and body roll in turns, but not enough to worry. Limiteds get a sport suspension that does little to affect performance in any tangible way, even with larger 18-inch wheels.

Steering is precise and neutral, although the Compass's turning radius is frustratingly wide, especially for city driving. Basically, the Compass drives like a car, just not as well. Similarly, it goes off-road like a truck, just not as well. Finally, while the ride is generally quiet, even more so than the Dodge Caliber from whence it came, this only serves to amplify the road and engine noise that permeates the cabin.

The big upgrade for 2009 was the Compass’s interior, which received improved materials and refreshed design, both of which have been well-received. It also seems as though fit and finish have been improved, as the overall construction of the Compass’s new interior just feels more solid and refined.

Controls and gauges are intuitive and easy to both reach and read. A clever option is found in the trunk speakers, which can be flipped up and faced out when the gate is open. This will work well for tailgating or picnicking, although the Caliber’s chilled glovebox hasn’t been retained. So much for gas-station sushi.

While there is ample head and legroom front and back, some reviewers have found difficulty in locating a comfortable seating position for driving, even with the taller, height-adjustable driver’s seat. As with the Commander, too low, too flat seat cushions in the rear make anything longer than short trips tiring, and the Compass’s narrow rear doors inhibit exit and entry. Visibility is also a problem, due to thick roof pillars and tall headrests.

The Compass comes standard with dual front and curtain side airbags, antilock four-wheel disc brakes with brake assist, anti-skid, traction control, and a tire pressure warning system. The NHTSA awarded the Compass four stars in all tests excluding side impacts for the driver and rear passenger, which both received five stars.

Many owners have been perplexed by the Compass, which seems to be a jack of all trades and master of none - for instance, a low-range gear for off-roading in a vehicle with clearance too low to do any real off-roading. While the interior upgrades have been desired since the vehicle's introduction, they will do little to fix the visibility or comfort problems that make long-distance driving a chore. Still, the comfortable suspension and neutral steering do add to ride enjoyment.

Have you driven a 2009 Jeep Compass?
Rank This Car

Hi I Have An 09 Jeep Compass Starts Runs For Maybe Minute And Shuts Off Can...

09 jeep compass will not ideal