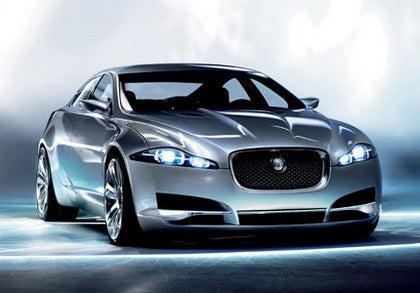 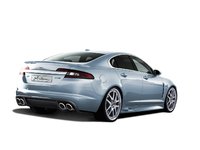 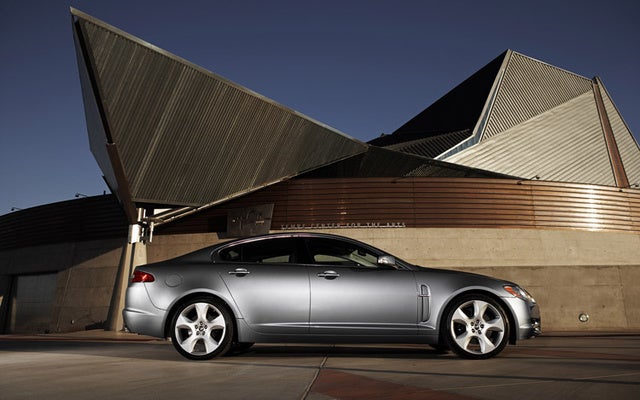 The 2009 Jaguar XF represents not only a new direction for Jaguar, but possibly its last hope to resurrect the brand. Ford is in the process of selling Jaguar after a decade of disastrous attempts to revive the classic marque. The XF directly replaces the S-Type, which attempted a nostalgic, retro revitalization of the brand that failed both on the road and on the sales charts. The XF looks forward in both design and engineering.

Design-wise, Ian Callum, director of Jaguar design, and his team took some of the best lines from past Jaguars, like the Mark 2, but built on the best features of the XK sports coupe to create an edgy new look for Jaguar that has reviewers raving.

This new Jaguar experience all starts with the "Jaguar handshake." Sit in the driver's seat. A pulsating red, keyless Start/Stop button draws your attention to the center console. Push the button, and the car comes alive, and not just with the engine turning over. Concealed air vents on the dash slide open as the JaguarDrive Selector rises out of the center console into your waiting hand.

That innovative control module is a rotary shift knob. Turn it to Drive, and off you go. It also offers a Sport setting that accelerates transmission response time. If rotating knobs are not your thing, just pull one of the steering-wheel-mounted shift paddles and shift manually. If you hold the upshift paddle for two seconds, the system reverts to standard Drive. Reviewers report "brilliantly quick" shifts in manual mode - Jaguar says they're 10% faster than the XK coupe's.

The ZF six-speed automatic is mated to one of two engine choices in the U.S. version. Luxury and Premium Luxury XFs come standard with a 4.2-liter naturally aspirated V8 that produces 300 hp and pushes the 4,200-pound sedan from 0-60 in 6.2 seconds, with a top speed of 121 mph. Move up to the top-of-the-line Supercharged XF, and that 4.2-liter V8 comes topped off with a Roots-style supercharger and intercooler combination that's good for 420 hp and propels this cat from 0-60 in 5.1 seconds with an electronically governed top end of 155 mph. The base V8 received an EPA estimate of 18/26 mpg city/highway, and the supercharged version got 17/23 mpg.

The XF utilizes the basic suspension package found on the XK sport coupe, with independent forged-aluminum double-wishbone arms, a 1.2-inch roll bar in front, and a 0.54-inch bar in the rear. The Supercharged versions add Jaguar's Computer Active Technology Suspension (CATS), an adaptive-dampening system that balances body control with suspension comfort that modulates rough-road shocks. Adding to the impressive ride characteristics, reviewers found the variable-ratio power steering "magnificent; rich with feedback." This is all greatly aided by, according to Jaguar, the stiffest body structure in its class - the use of 25 grades of steel, plus aluminum and magnesium, greatly facilitates this stiffness. In addition, a composite undertray and double bulkhead add to cabin quiet.

Reviewers found the overall driving experience had a lot in common with the XK's, providing a direct sense of the pavement and firm grip even in the tightest corners. An excursion on drenched pavement convinced one reviewer that only a serious driver error or icy roads could cause the big cat to falter. They even went so far as to proclaim that Jaguar had come as close as anyone to the noted sport sedan feel of the BMW 5-Series. This adds up to a huge leap from the S-Type's road manners. The handling is actually a return to traditional Jaguar light-footed suppleness with, perhaps, more body control than has come to be expected from Jaguar.

In the cabin, Jaguar interior designer Alister Whelan was determined to further enhance the groundbreaking exterior and mechanicals. Rather than the traditional sport sedan conventions, Whelan opted for a sumptuous leather, aluminum, and wood environment; as a matter of fact, this Jaguar has more polished wood (your choice of American Walnut, Burl Walnut, or Rich Oak) than any previous model. The driver and front passenger seats have been compared to fine armchairs.

The dashboard is low, providing a sense of spaciousness and expansive down-the-road visibility. The ergonomics and styling are spot on. A seven-inch LCD touch-screen interface provides easy control of the audio, climate, and nav systems. The overhead lighting, button interface lighting, and glovebox operate via motion- and pressure-sensitive sensors. Adding to the style and beauty that abounds here is an ambient phosphor-blue lighting for the instrumentation. The only qualm is with the back seat, in which tall reviewers felt cramped. The trunk is spacious, with 18 cubic feet of cargo space and more with the back seats folded down. Reviewers enthuse that Audi's legendarily elegant interiors have finally found their match in the XF's cabin.

A diesel version is also slated for the U.S., and we'll quite possibly see a high-performance XF-R model with perhaps 500 hp. Jaguar is at a crossroads. Reviewers see the role of the XF as the company's salvation and believe it has all the elements of a great sports sedan.

Users ranked 2009 Jaguar XF against other cars which they drove/owned. Each ranking was based on 9 categories. Here is the summary of top rankings.

Have you driven a 2009 Jaguar XF?
Rank This Car

What Causes My Jaguar FX 2009 To Drop A Gear Occasionally?

Does Not Go Over 55mph

I have problems with my 2009 jaguar xf first I thought it was the transmission so got it serviced and that wasn't it.so I took it to aamco diagnose 20 cods so changed the spark plugs and still...

Trunk Will Not Open

I have a new battery in car and fob and the trunk still will not open,inside shows trunk open but not, I have to use the key. Is there a fuse for trunk release?