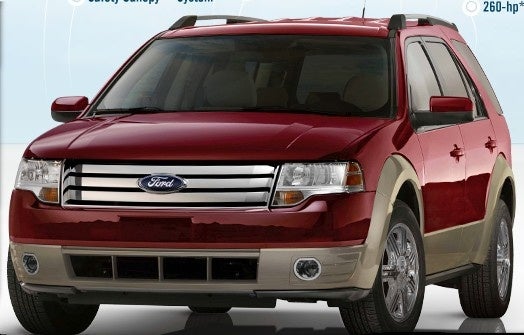 A good engine/transmission combination, along with a comfortable ride and slick styling, indicate the Taurus X could be a winner in the crossover category for years to come.

Cheap interior materials and a noisy engine in the Taurus X have marred an otherwise wonderful reception for this crossover, which could sadly not last past 2010.

The Taurus has been a steady, dependable winner since it showed up over twenty years ago, and the Taurus X is no different, except it offers more room. AWD is nice, but weigh your need against the decrease in mileage. For an extra thousand dollars, the Limited just doesn’t seem worth it.

So the Five Hundred is now the Taurus and the Freestyle is now the Taurus X? Okay. Available in six trims across two drive configurations, the Taurus X is Ford’s resident crossover vehicle, hence the “X” designation. Basically a carryover from the vehicle's slight styling refresh in 2008, rumors have circled that it might die as soon as 2010.

Standard six-passenger seating can be increased to seven by choosing the no-cost bench option for the second row. New for this year is Ford’s post-crash alert system, which activates the horn and flashers after an accident. 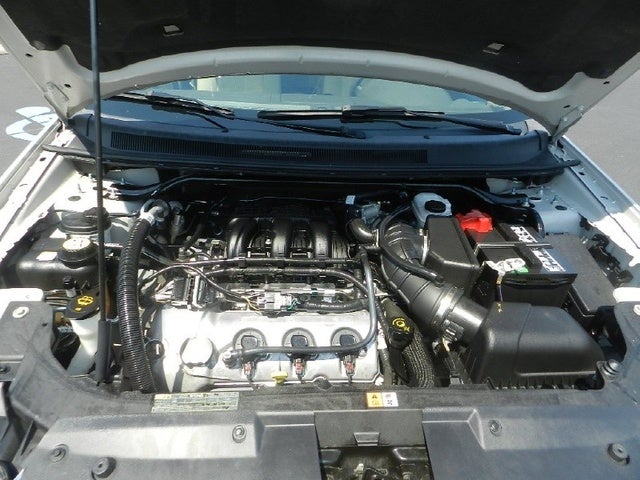 You won't find a wealth of options with the drivetrain of the Taurus X: one engine, and one transmission. At least you get to choose between front- and all-wheel-drive. The good news is that its 3.5-liter Duratec V6 ain’t bad at all, if a bit noisy. It’s a shame really, as the noise hints at a lack of refinement that in actuality isn’t there. The 2008 Taurus X saw an increase of almost 30 percent over the '07, to 263 hp, and the six-speed automatic it’s paired with was developed in concert with this engine.

With that in mind, it’s a fully competent arrangement for the Taurus X. Unless you plan to race or tow well beyond its 2,000-pound capacity, you’ll find more than enough power in all situations. Owners have suggested a manual shift option for the automatic transmission, which would alleviate some of the hesitation in downshifting that has been noticed. Expect 17/24 mpg with the FWD layout and 15/22 with AWD. Reviewers found an average of 18.3 and 16.5 for the FWD and AWD, respectively.

Let’s be honest, this is basically the Five Hundred, which filled the well-worn shoes of the Taurus so well that it's been renamed as such. Accordingly, the Taurus X rides like the Taurus/Five Hundred, except with a bit more weight up high. It’s smooth, it’s reserved, and it’s certainly not going to make you feel like an Andretti or an Unser.

However, it's plagued by a bit of body lean and roll, more so than you’d hope, even from a crossover. But then, what did you expect? Its turning radius could definitely be improved, especially for in-town maneuvering, and pedal feel could use some serious refinement. The brakes are strong, and braking itself is confident, but they lack the composure we’ve come to expect from crossovers. It’s essentially a car, and it brakes like a ten-year-old truck.

It seems too many manufacturers have been overly concerned with cramming as much technology into their vehicles as possible, with little or no consideration to actual function lately. While the Taurus X is graced with a considerable number of features and options, complaints have shown up with regard to their intuitiveness.

Audio and climate controls are hard to reach and inconvenient when you do reach them. The navigation system has a too-small screen that’s hard to read unless you're sitting directly in front of it. The steering stalks are positioned too far from the wheel to be in comfortable reach and get in the way otherwise. The one good part would be the gauges, which are large, clear, and well-positioned. It seems a blind pig does get lucky once in a while.

With regard to the interior, it seems function has definitely won out over form. Fit and finish are exemplary, but the materials used leave a lot to be desired, with too-hard plastics dominating.

Space is adequate, except perhaps for those with exceptionally long legs. Headroom is a problem beneath the optional sunroof/DVD only with the no-cost second-row bench option. Overall, the seats are supportive and comfortable, especially the optional second-row buckets, although the cushions in the third row are inadequate for anything longer than around-town driving.

Visibility is good throughout, with the roof pillar providing minimal hindrance, which can be considered standard for a crossover.

With front and curtain airbags, traction control, anti-skid and antilock brakes, the Taurus X has plenty of safety features to make you feel more than secure. Additionally, brake assist, low tire pressure monitors, and a post-crash alert system are all standard, with the only additional safety feature being a rear-obstacle-detection system on the Limited trim.

Predictably, rollover and rollover resistance at four stars are the only categories that didn’t receive a five-star rating in NHTSA tests.

The Taurus X does what it’s meant to do and it does it well. Complaints have been heard about a noisy engine, cheap interior materials, and a Spartan third-row seat cushion, as well as complaints about the placement and logic of the controls. Pretty much every other aspect of the vehicle has been very well received.

Have you driven a 2009 Ford Taurus X?
Rank This Car

Locked My Only Key In Locked In Taurus X 2009

My battery died and was replaced. The dvd and cd players no longer work says initializing. The mileage and miles to next fill are frozen as well. How do I get them to work?

Hello, I have a 2012 Ford Taurus SL or SE. Sometime when I turn my car off it want start back up without a jump. What could be the problem? Please advise