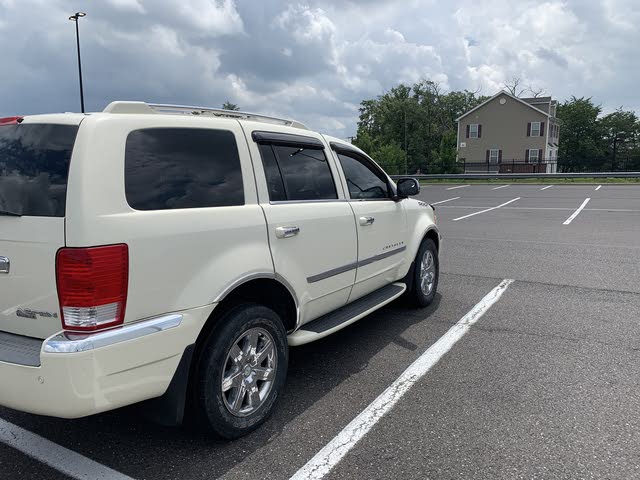 The 2009 Chrysler Aspen is roomy, it’s comfortable, and because no one really wants it, you won’t have to wait in line to get one.

If you want a vehicle that rides like an over-laden boat and gets even worse gas mileage, look to the '09 Aspen.

The conventional Aspen is a viable option for those looking for a premium midsize SUV without wanting to pay the higher prices that usually accompany vehicles in this class. However, the Hybrid still has too many issues to really warrant a recommendation, and the suspensions of both Hybrid and conventional configurations are very simply inadequate. Perhaps the competition deserves a closer look.

In what will be its final model year, the Chrysler Aspen sees more power for its 5.7-liter Hemi V8, and a new gas/electric Hybrid engine. The Aspen is essentially a slightly upscale and rebranded Dodge Durango and was the first SUV for the Chrysler badge. Upon its introduction, every American automobile manufacturer had an SUV in its model lineup, although this ceased to be true as of December 19, 2008, when Chrysler closed its Newark Assembly facility.

Seating up to eight, the Aspen is available in either rear- or all-wheel drive, with a choice of three powerplants for its Limited trim, including the new 5.7-liter Hybrid Hemi.

The final option is a Hybrid version of the 5.7-liter Hemi that pairs that engine with an electric motor for a total horsepower rating of 385. While both conventional engines are paired to a five-speed automatic, the Hybrid gets a Continuously Variable Transmission (CVT) that leaves the electric motor engaged until around 20-30 mph before switching over to the gasoline engine. Maximum towing capacity for Hybrids is 6,000 pounds.

While power is sufficient with the 4.7 and quite impressive across the entire range with the conventional 5.7, the Hybrid never manages to impress, with slightly anemic performance while under electric power and adequate power otherwise. The five-speed automatic provides smooth and timely shifts and the CVT, while producing a slight lag when changing between electric and conventional power, otherwise allows for smooth power delivery under conventional power.

Even with the Hybrid, the Aspen is woefully inefficient, with an EPA estimate of 13/18 mpg for both conventional engines and 19/20 for the Hybrid.

Ride & handling are among the many weak points of the Aspen. In conventional form, the Aspen weighs over 5,000 pounds, and the suspension seems ill-equipped to handle its heft - floating and wallowing at speed, skittish over bumps, leaning precariously in all but the slowest turns, and nose-plowing alarmingly during braking.

Hybrids are even worse, unable to account for the additional weight above and beyond the already obese conventional trim. Strangely, testers have noticed an increased skittishness over bumps and uneven pavement, despite the added weight and 119-inch wheelbase. Additionally, the steering and pedal feel have been criticized for being overly numb.

Despite its luxury pretensions, the interior of the Aspen still falls short of its competition, although it's notably upscale from the Durango. The Aspen’s controls fall victim to the same issue that many vehicles have been suffering lately, redesigned markings that some find difficult to read, but otherwise controls are well-placed, making them easy to both see and reach. Special praise has been seen for the power display in the Hybrid’s navigation system.

Headroom is ample, especially impressive considering the loss of space under the sunroof, and legroom is ample in both first and second rows, becoming cramped only for those above 6 feet. Access to the third row is relatively easy, with the second row moving forward enough to even allow adult access, although the seats aren’t comfortable enough for long-term use. The largest drawback is the high step up for entry, aided considerably by optional running boards.

Tires can occasionally produce excessive road noise, and the large rearview mirrors cause wind rush that becomes distracting at speed. All three engines are quite composed, however, even under acceleration.

Standard safety features for the Aspen are dual front, front side, and curtain side airbags with rollover deployment, antilock four-wheel disc brakes, an antiskid system with rollover sensors, a rear-obstacle-detection system, and a tire-pressure monitor.

The Aspen has been a bit of a disappointment, and sales have reflected that. Woeful fuel efficiency, even in Hybrid form, and suspensions that seem designed for a much smaller and lighter vehicle have all marred the reputation of what has become a forgotten cousin in the SUV class.

What's your take on the 2009 Chrysler Aspen?

Have you driven a 2009 Chrysler Aspen?
Rank This Car

What SUv Should I Buy 09-Saturn Outlook, 09 Chrysler Aspen?

I got 2 cars im looking at at a buy here pay here lot but im having trouble picking which one the Outlook is the Base (XE) and the Aspen haves the leather and chrome rims and thats all i remember se...

What Does Limited Mean

I just bought a 2009 aspenimited with the hemi. What does "limited" mean??? What does it "include " or signify for the vehicle?

I Have Water Coming In From Back Hatch Area

Water leak at back hatch area after rain in my 2009 aspen. What to do. Chrysler wants 120 to look at it for first hour.

2009 Chrysler Aspen, Humming Sound I Believe Is The Rear End Is Getting Lou...

I've been driving it for a while with a humming sound, the mechanic said it was okay to drive but the sound will become louder. This week the sound is quite loud, worried I'm going to breakdown. How...