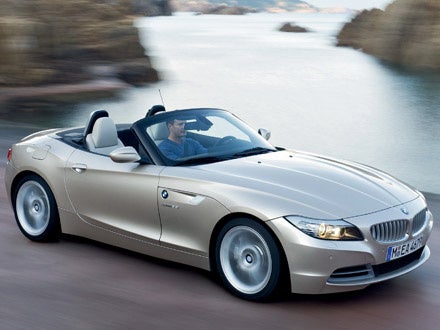 Among the stars of this year’s North American International Auto Show in Detroit was BMW’s stunning 2009 Z4 roadster. While some BMW unveilings of late have triggered gasps of the wrong sort, the all-new Z4 bowed to rave reviews. The design subtly integrates traditional BMW styling cues with crisp sheet metal that is wildly futuristic yet tasteful. With its long hood, short deck profile, and muscular stance, the Z4 establishes itself as a sportier, more upscale car than its predecessor.

Offered only as a two-seat, rear-wheel-drive roadster, the 2009 Z4 benefits from a new folding metal hardtop, a desirable feature that should help BMW compete with Mercedes’ popular SLK model. Despite adding weight and complexity, the new top pays dividends in rigidity and comfort when raised while still providing a true open-air experience when lowered. The revised chassis is laudably stiff, and cowl shake is minimal, even with the top down.

BMW gives Z4 buyers a choice between a naturally aspirated 3.0-liter straight six that makes 255 hp or a slightly de-bored, twin-turbocharged version of the same motor that serves up 335 ponies. In the great tradition of velvety BMW sixes, the Z4’s motor is organically smooth and willing to rev. While the 2009 Z4 carries a few extra pounds, it possesses sparkling performance even with the base motor. Step up to the turbo version, and you’ll be rewarded with buckets of torque and a sub-5-second 0-60 time.

The base Z4 trim is the oddly named sDrive30i which mates the non-turbo motor with either a six-speed manual gearbox or a conventional automatic. While slightly notchy the stick shift offers a positive, direct action and an easily modulated clutch. The automatic is smooth and competent, but seems sacrilegious in such a sporty car. The step up sDrive35i trim gets the hot twin-turbo engine and offers an optional seven-speed dual-clutch gearbox. This recently developed unit features two computer controlled clutches and delivers fast, silky shifts and seamless rev-matching.

Handling is another BMW specialty (is there anything its cars don’t do well?), and the new Z4 advances the company’s reputation for building capable corner carvers. While the addition of so-called "adaptive" suspension components has diluted some of the Z4’s feedback, the chassis remains perfectly balanced when pushed, and the wide, sticky tires provide plenty of grip. The new electric power steering is light and direct, but gives up a bit of feel compared to previous BMW racks.

The new Z4’s interior is a far cry from the functional-yet-spartan spaces that have adorned BMWs for decades. The cocoon-like dashboard features optional stitched leather and glossy wood veneer. While not as ergonomically correct as it could be (the ubiquitous iDrive media interface is still an annoyance), the layout is fresh and modern. Space for two is generous for this class, and clever storage bins pepper the cockpit. Trunk space is fair when the top is up, but once folded there’s barely room for a single overnight bag, and a small shelf behind the seats is a welcome addition.

Overall the new Z4 hits all the right notes. It combines high performance with high style and even delivers a dose of practicality. But excellence doesn’t come cheap; the 2009 Z4 demands that buyers dig deep into their pocketbooks. Base sDrive30i trims feature vinyl-clad seats and no navigation, yet sticker at nearly 50 thousand dollars. A loaded sDrive35i turbo will crest 70 grand, an ambitious price point to be sure. But for those who can afford to spoil themselves, the Z4 supplies nearly every motoring thrill under the sun.

What Services Can You Provide For Private Sale?

I live in Indiana, car in Ohio. Can you arrange payment, shipment, minor inspection. Seller wants sell by July 4.

CRAIG'S LIST HAS A PROBLEM WITH ME POSTING BOTH PLACES Why.

Need to know the above info so I can prove that BMWs do not lose their value over time as much as other car makers.