The standard-setting engines and suspensions of the BMW 3 Series see a new standard being set in their latest stablemate for 2009, the 335d diesel.

BMW continues to complicate what was already a wonderful example of driving simplicity with the iDrive system and other questionable ergonomic choices. 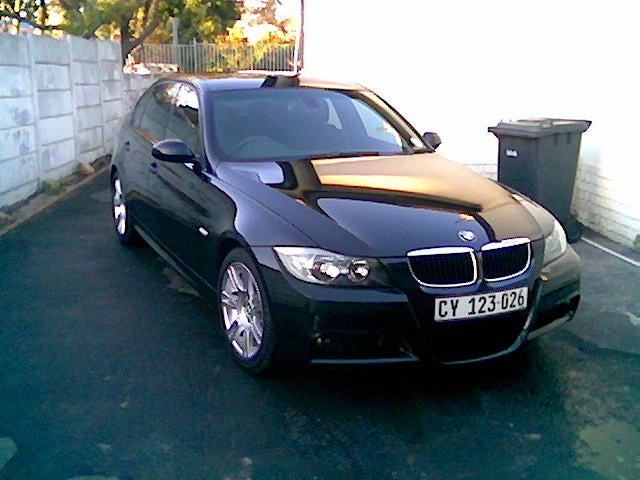 It’s hard to go wrong with the 3 Series, as its many configurations serve so many purposes. Depending on your options, you can have a very capable family sedan, a spirited coupe, or a virtually track-ready adrenaline delivery system. If recommendations must be made, forget the iDrive, and if you live where it snows more than occasionally, take xDrive into serious consideration.

BMW's 3 Series is one of the most varied and inspired models out there. Available as a coupe, convertible, sedan, or wagon, it carries with it the tradition that includes the 1600 and the 2002. The 3 Series has been in continuous production since 1975 and now features more than thirty years worth of performance and innovations.

The 3 Series has gone through a host of styling changes this year to a predictably mixed reception. A new face graces the 3 Series in the way of a new bumper and revised air intakes, a new hood, and the loss of the “eyebrows” over the twin kidneys that so many complained about. Moving backward, the mirrors have been slightly modified as well as the rear tail lamps. All four lamps have LED turn signals integrated, and the look is only slightly different as a result. Additionally, the rear wheel width has been increased, producing a slightly more aggressive stance.

Interior materials have also been upgraded, and the cursed iDrive system has been slightly simplified, although not enough to recommend it. It’s optional on the 3 Series, thank the automobile gods, although deleting it will also delete the navigation system, which now features an 80GB hard drive and real-time traffic. 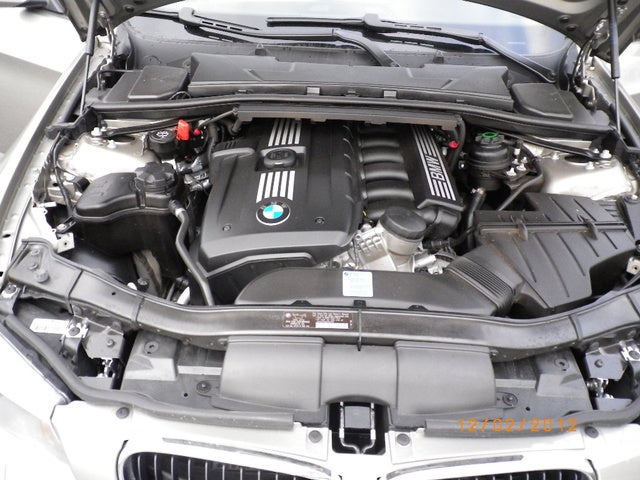 Given the host of body styles and configurations consumers can choose, it’s not surprising that there are no less than four engines that may power your 3 Series. First up for the 328 is a 3.0-liter straight six that produces 230 hp at 6,500 RPM and 200 lb-ft of torque at 2,750 RPM. While the base entry for the model, this is a formidable engine, delivering plenty of power at all speeds and in virtually all conditions, whether around town or on the highway. EPA estimates are almost identical at 18/28 mpg for the 6-speed manual transmission and 19/28 for the 6-speed automatic.

For the 335s, the same 3.0-liter inline six has been fitted with a twin-turbo setup and boosted to just under 6 psi to produce a manufacturer rated, and highly suspect, 300 hp at 5,800 RPM and 300 lb-ft of torque at 1,400 RPM. EPA estimates for both 6-speeds are identical at 17/26, an impressive showing considering the power increase over the naturally aspirated version. The twin-turbo setup eliminates turbo lag and produces more than enough power for literally any situation.

New for 2009 is the 335d’s turbodiesel 3.0-liter inline six, which produces 265 hp at 4,200 RPM and a ground-pounding 425 lb-ft of torque at 1,750 RPM. Thankfully, you’re not giving up economy for all that power, with EPA estimates of 23/33 on the six-speed automatic, the only transmission available. Actual test drives of this engine are scarce, but the numbers alone speak of tremendous power, with more torque than any of the other engines, even the V8 that comes in the blisteringly fast M3. 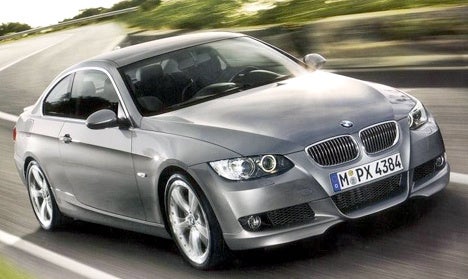 For a car that has been dubbed “The Ultimate Driving Machine,” a car that carries the heritage of the legendary BMW 2002, it’s no shock that the 3 Series has become the high water mark for all other manufacturers when it comes to handling. Two suspensions are available, base and sport, and predictably, the base suspension is comfortable, capable, and willing to eat up almost any road conditions you throw at it. Coupes get the sport suspension standard, which has an additional emphasis on performance, and can get squirrely on broken road. Expect a little shimmy or sidestep when attempting to Charleston rather than waltz.

Regardless, when it comes to actually handling, it’s hard to beat a BMW, and the 3 Series is the best of the best. Steering is crisp, pedal feel is firm, and braking is strong. This is literally about as good as it gets. 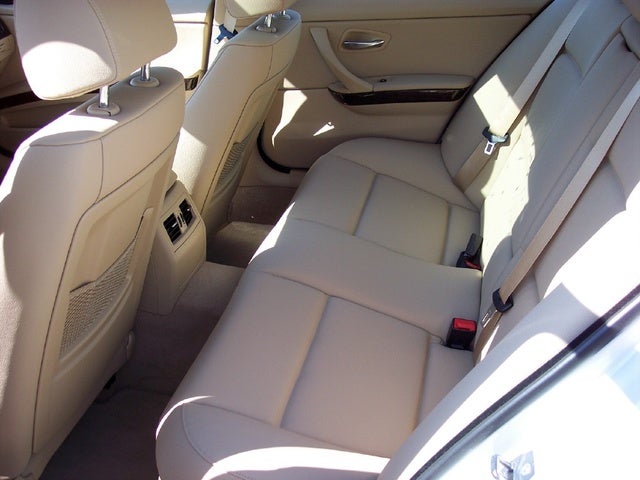 Is it ironic or tragic that BMW, father of the no-frills, all-chills 2002, has graced us with the iDrive system? iDrive has been accused of being responsible for taking more enjoyment out of driving than any feature previously offered by a manufacturer. Hyperbole aside, be glad that it’s optional for the 3 Series. While a slightly simpler version than offered on other models, it’s still unnecessarily complicated and counter-intuitive. Some other controls are simply too far out of sight, or otherwise blocked by the steering wheel, but at least everything looks pretty. Leather and wood grain are abundant and of high quality. But you’re paying for it, too.

Comfort is not in short supply, even for taller drivers, and support in the seats is appropriate for the suspension’s pretensions. A fully adjustable steering wheel and seat mean nearly anyone can find a comfortable position, although those who like to sit low and long may cause problems for anyone sitting behind. That said, with a driver of average stature, even those approaching 6 feet or more can find comfort in the back. 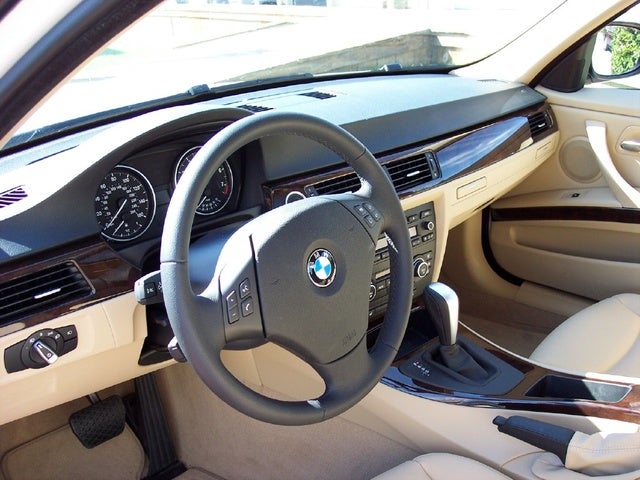 The 3 Series comes standard with dual front and front side airbags, and all but the convertibles additionally get front and rear side head-protecting airbags, while convertibles get automatic roll bars. All models get antilock four-wheel disc brakes, an antiskid system, front-seat active head restraints, a tire pressure monitor system, and daytime running lights. 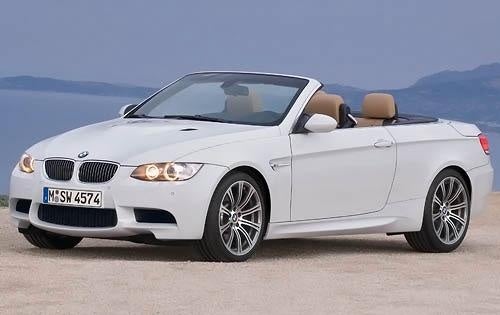 Complaints have been heard about control positioning as well as the usual complaints about the iDrive system, which encompass the distinct majority of issues reported. Some have noticed tire noise growing increasingly intrusive, but these small complaints are washed out by the overwhelming praise that the 3 Series's engines, suspension, and styling have continually received. 2009’s subtle changes have seen mixed reviews, as usual.

FC Best in class vehicle. Agile and tight steering for a 6 cylinder convertible. The hard top convertible also better than soft top shielding the passenger compartment and reduce outside noise. When we’ll kept the odometer reading is irrelevant

Users ranked 2009 BMW 3 Series against other cars which they drove/owned. Each ranking was based on 9 categories. Here is the summary of top rankings.

184 views with 5 answers (last answer about a month ago)

Can I Sell My Car On Car Gurus

I have a BMW 328I 2009. The car was working completely fine. I stopped to fill it up with gas and when I turned on the car and drove it for 3 minutes. A bad smell like something was burning was comi...

The Cost Of Maintenance Of A Bmw And A Lexus

I am a college freshman and I am planning to buy an used BMW 335i Coupe( under around 29,000 dollars). However, I have heard that maintaining a BMW is much more expensive than maintaining a Lexus. I...

Does My Car Have The Sulev Warranty?

I have a BMW 328i with 198k on it, does it still have the sulev warranty in California?