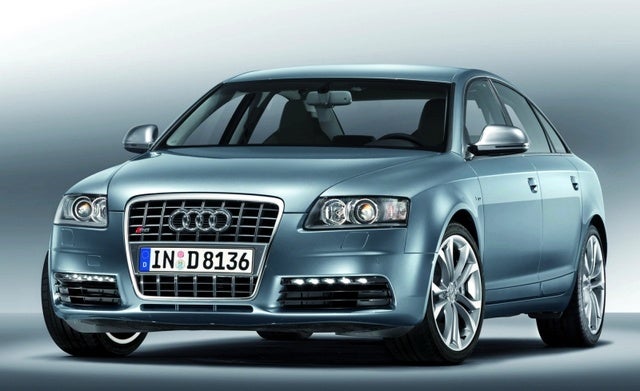 Easily distinguishable by the row of LED running lights that graces both sides of its front bumper, Audi’s sport-inspired version of its A6 executive scoot, the S6, has much more than visual cues to separate it from its little brothers. This four-door, five-passenger luxury sport sedan comes standard with the six-speed Tiptronic automatic transmission with steering-wheel-mounted paddle shifters, Audi’s quattro AWD and a 435-hp, 5.2-liter V10 designed by Lamborghini.

With a suspension further tuned for an even more aggressive and sporty ride than that of the already impressive A6, some would say the ride of the S6 borders on harsh. Its 19-inch wheels help the eyes complete a path around the more zealous bodykit that immediately lets you know you’re not looking at your average A6. The interior is similarly accented with sportier styling and optional carbon-fiber accents. Seats are bolstered with extra support for spirited weekend jaunts along the pavement, but still have enough comfort for long-distance travel - although the suspension and road noise might jar some of that comfort away. Audi’s quattro AWD system has recently been tuned to give an uneven torque bias to the rear wheels of 60 percent, meant to make the car feel a bit more like it has RWD.

The engine is unchanged from last year, and that’s not a bad thing. It’s pleasantly aggressive under hard acceleration and refined at cruising speeds. Although with 90% of its almost 400 lb-ft of torque available at 2,300 rpm, you might find yourself hearing more anger than idle. Additional upgrades have been made to the chassis and brakes, and the transmission and steering have been specially tuned as well, perhaps due to some past criticism about the neutral feel of the A6’s steering.

Standard safety features for the S6 include dual front, front side, and curtain side airbags, antilock four-wheel disc brakes with brake assist, an anti-skid system, a tire-pressure monitor, and daytime running lights.