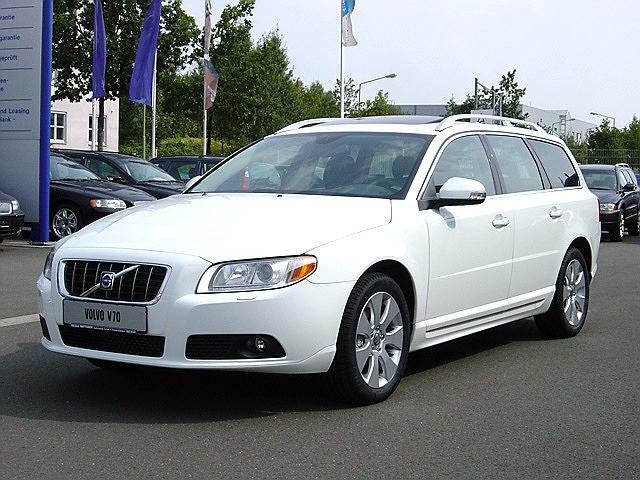 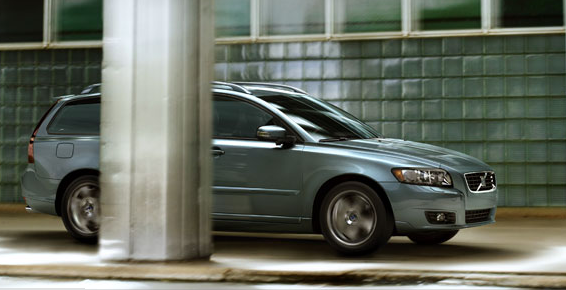 No matter how many curvy lines or high side profiles or sporty wraparound taillights you put on it, a solid, safe, sturdy station wagon will not appeal to singles or young couples. Wagon shoppers tend to be families looking for a versatile hauler of cargo and people, with a high level of safety and security. But you can't blame Volvo for trying. What was once "boxy, but safe," the 2008 Volvo V70 now boasts sportier, curvier edges and a larger rear "Volvo" badge, along with a more-powerful engine than past generations. But the V70 can't hide the fact that it's an upscale, conservative, well-apportioned family wagon with a strong emphasis on crash protection.

The front-wheel-drive wagon now comes in one trim only and has been redesigned for 2008, resting on a new platform based on the upcoming S80 sedan. This adds a few more inches to the length and headroom, improving passenger room and expanding the cargo area from 33 to 71 cubic feet when the 40/20/40 split-folding rear seats are down. More comfortable seats, a thinner center instrument stack, and an upgraded sound system are some other superficial improvements. Significant improvements focus on safety and power. For the first time, the V70 gets an inline six-cylinder engine, a 3.2-liter, 235-hp one that delivers 236 ft-lbs of torque at lower RPMs than previous versions. It's matched to a six-speed manumatic and hits 0-60 in around eight seconds. It's nothing to take onto the track, but it is more powerful than previous models.

Safety is number one with the 2008 Volvo V70, and it earns five stars consistently in crash tests. Along with standard ABS brakes, dual front and side curtain airbags for both rows, traction and stability control, and backup sensors, the 2008 version has beefed up its whiplash-protection system, strengthened body parts for more durability, increased side impact protection, and lengthened the side curtain airbags. A new addition is adjustable integrated booster seats. The seat height can be lowered or raised, depending on the size and weight of the child. Other optional safety features include adaptive cruise control, lane departure warning, and collision warning. Despite the pretension of trying to "sport" things up, Volvo knows its audience, and its safety technology keeps families foremost in mind.

Interior comfort is also a Volvo hallmark, and the 2008 V70 comes standard with full power features, a 6-CD player, MP3 compatibility, leather trim, cruise control, a trip computer, and an 8-way power driver's seat with memory settings. The cargo area features hooks, a track system, and a cargo net, and can be outfitted with a sliding floor and a power liftgate. The increased power and less-conservative styling may broaden the V70 wagon's appeal, but it's the long list of safety equipment and reputation for reliability that will maintain popularity with its loyal fan base.

What's the problem? I try to start it and it doesn't click on but the interior lights did?

Looking For A Low Mileage V70

I would like to replace my 2001 V70 with another similar but later year manufacture with low mileage.. either 2007 or 2008. Car must have MANUAL TRANSMISSION and an integrated roof rack.