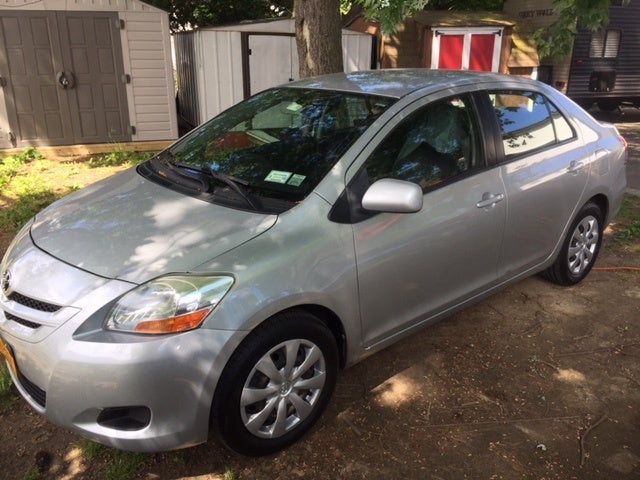 Hybrid-like fuel economy, an inexpensive base price, and a surprising amount of interior room and space make the subcompact '08 Toyota Yaris - available as a hatchback or sedan - an attractive starter car.

A lack of standard safety features in the '08 Yaris earns middling ratings, and low-quality plastic interior materials provide a disappointing reminder of this subcompact's low pricetag.

The 2008 Toyota Yaris delivers outstanding fuel economy wrapped in a stylish, roomy package. Though the liftback lacks the four doors of its platform-sharing Scion xD, its small size, cargo versatility, and easy maneuverability make it an ideal commuter car for first-time buyers or those looking to downsize their gas spending. The fuel savings come at the expense of creature comforts and safety features, however, and potential Yaris owners must decide if the trade-offs are worth it.

Returning for its second year on the market, Toyota's smallest car continues to save drivers money with its high fuel economy ratings and turn heads with its sporty styling. The front-wheel-drive subcompact comes as either a four-door sedan or three-door liftback, each in Base and S trims. New for 2008 is the S liftback, mirroring the S sedan. The S stands for Sport, but in appearance only, with additions such as body-colored moldings, bumper spoilers, ground effects, larger 15-inch wheels, sport seats, and a leather-wrapped steering wheel and shifter. The 2008 Yaris also adds a tire monitor to all trims.

The snub-nosed Yaris stretches a mere 150.6 inches as a hatchback and 169.3 as a sedan, but this compact profile disguises a spacious interior. Although the stylish and versatile liftback remains the more popular of the trims, the Yaris distinguishes itself from competition like the Honda Fit by offering a sedan for those desiring a roomier cabin.

The real selling point for the '08 Yaris lies in its fuel economy, one of the best for a subcompact, and with a pricetag under $13,000, the Yaris sets its sights clearly on young buyers and those on a tight budget. With its small dimensions and agile steering, the Yaris is perfectly suited for city commutes, delivering a fun ride while saving money at the same time. Its low cost comes at the expense of many standard features, however, and for those wanting a larger, more distinct, and better equipped wagon, without sacrificing the Toyota reputation for reliability, it might be worth spending a little extra for a Scion. 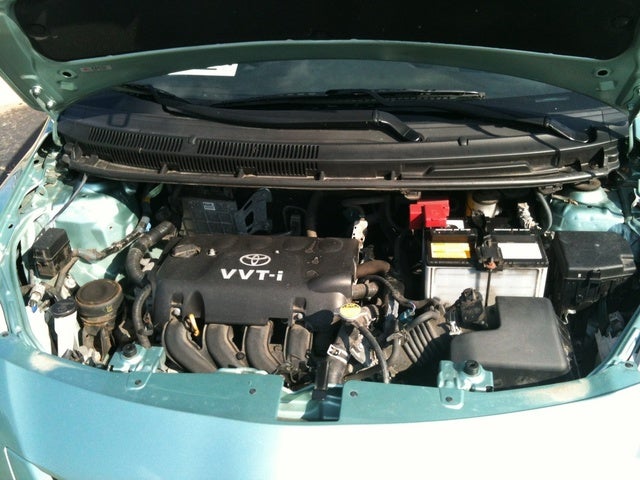 The liftback and sedan versions of the 2008 Yaris share a 1.5-liter DOHC inline-four engine that delivers 106 hp and 103 lb-ft of torque, matched to either a standard 5-speed manual or optional 4-speed automatic. Equipped with variable valve timing, the engine rates 29/36 mpg by EPA standards, but most owners report maximum highway mileage well into the 40s. For a subcompact the size and weight of the Yaris (2,300 pounds), the engine actually feels quite peppy, though noise levels rise considerably at speeds above 60 mph. The standard 5-speed is the preferred transmission, with reviewers finding it better matched to the engine than the sluggish automatic, particularly at highway cruising speeds. 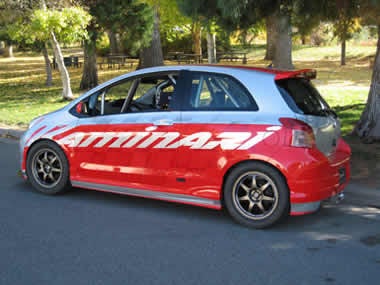 The '08 Yaris offers a fun, nimble, and energetic ride for a subcompact. Its light weight takes advantage of what would likely seem an underpowered engine in a heavier car. Though it struggles during highway acceleration and uphill climbs (and the engine makes sure you hear its efforts), reviewers found the Yaris feels adequately confident when passing and merging. Its small dimensions also create a wonderfully small turning ratio and agile maneuverability, a big plus in city driving. Many owners rave about the ease of parking it in tight spaces.

The soft suspension and electric power steering do take away most driver interaction with the road, but on the flip side, the light-touch steering responds instantaneously and adds to the car's overall responsiveness and maneuverability. Bump absorption is about what you'd expect in a subcompact – nothing great, but not too jarring. Probably more suited to city streets than highways, one major drawback of the Yaris' light weight, as noted by both reviewers and owners, is a tendency to drift in heavy wind gusts. 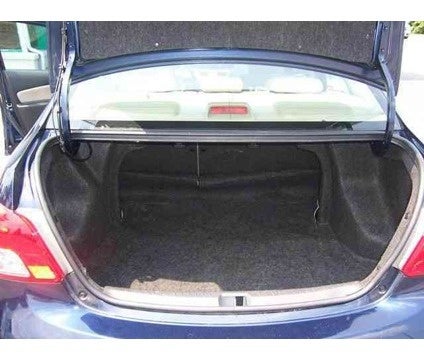 As an economy subcompact, luxury does not come into play in the '08 Yaris. Neither Base nor S trims offer many standard features beyond air-conditioning, intermittent wipers, and a tilt steering wheel. The S trim adds a CD player with MP3 jack, which is optional on the Base. Other S features focus mainly on jazzing up the exterior with sporty add-ons. On the inside, amber Optitron illumination surrounds the gauges, leather covers the steering wheel and shifter, and front sport seats provide a bit more support.

Power windows and locks and remote entry are optional on all trims, but cruise control, a feature many drivers wish came standard, is offered only on the sedan. Standalone options include a rear spoiler and foglights. Despite the short list of equipment, aftermarket Toyota accessories can be added for a more custom Yaris, along the lines of the Scion models. However, adding extras significantly raises the pricetag, making the Yaris just as expensive as larger and better equipped cars.

The interior of the '08 Yaris surprises many drivers with its roominess, particularly for taller adults. The hatchback measures 150.6 inches in length with a 96.9 wheelbase, allowing for 40 inches of front legroom and 33.8 in the back. The sedan adds nearly 20 inches to the length and 3 to the wheelbase, increasing legroom for front and rear passengers by about 2 inches. The Yaris actually stands an inch taller than the Camry, and drivers report that adults taller than 6 feet still have plenty of headroom, even with the slightly sloped hatch. The seats sit high, offering better visibility and decreasing the intimidation factor when driving next to a big SUV. Access to the rear seats in the two-door hatch can be difficult, and some owners wish for a four-door hatch, along the lines of the Scion models.

The liftback's cargo area starts at 9.3 cubic feet, but expands to 26, with its standard 60/40 split-folding seats. These seats fold flat, recline, and slide forward and back for added legroom or storage capacity. The sedan's trunk holds 14 cubic feet, but optional split-folding rear seats can be added for more space. Compartments and pockets lie mainly in the front dash and near the center stack for plentiful storage, although some lack secure lids. The hatch offers three gloveboxes, including one in front of the driver, which many owners find convenient.

Seat comfort gets mixed reviews, particularly on long rides. Both drivers and reviewers mention that the steering wheel sits too far away from the driver, with an inadequate number of tilt adjustments to mitigate this problem. The unique narrow center stack, particularly in the hatch, allows for more knee room by vertically stacking the climate control dials. However, the instrument gauges lie in the center of the dash and not in front of the driver and can distract the driver's eyes from the road. Owners complain about this layout at first, but get used to it pretty quickly.

Front cupholders fold out from the dash and sit in front of the air-conditioning vents. Many drivers find this awkward, noting that the air-conditioning often affects beverage temperature - a good thing if you have the heat on in the winter with a coffee in the cupholder, but not so good if that same coffee sits in front of the air conditioner. The overall interior disappoints both owners and reviewers due to the poor quality of the plastic materials used in the cabin, with many owners reporting early wear and tear, including paint chips, scratches, and broken pieces. Smacking of a cheap economy car, it certainly detracts from Toyota's reputation and the otherwise solid Yaris. However, if fuel savings take precedence over bells and whistles, the '08 Yaris fits the bill. 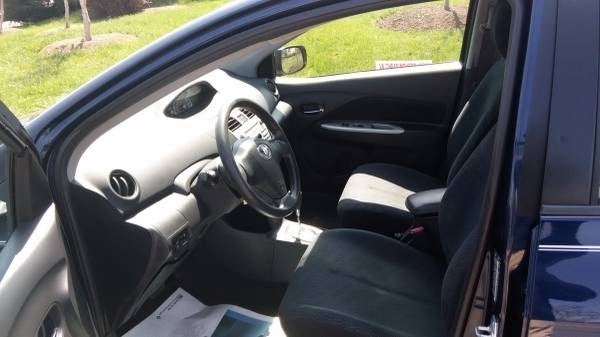 Apparently to keep costs down in this economy car, only dual front airbags come standard in the '08 Yaris. Traction and stability control are not offered, while ABS brakes and side curtain airbags for the front row remain optional. A tire monitor has been added for 2008, to measure pressure in the 14-inch wheels (15-inch on the S trims). Though it earns four and five stars on frontal impact tests, side impact tests for trims not equipped with side airbags score only three stars and receive a Poor rating from the IIHS. With side curtain bags, the IIHS score moves up to Good. 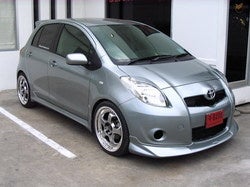 CarGurus users overwhelmingly give the '08 Yaris four and five stars in all rated categories, citing its outstanding fuel economy as their favorite feature of the subcompact. Echoing praise from professional reviewers, they mention the engine as being “peppy” and fun to drive, with mixed reviews on acceleration power. Some find it adequate, but others want more response. Another nice surprise for owners is the interior space, and though it does not actually seat five as Toyota claims, owners are impressed with cargo space and versatility. The biggest complaints focus on the lack of four doors in the hatchback model.

Similar opinions pop up on other websites, with high marks going to the Yaris' fuel savings, economical ride, interior space, and the reliability that comes with the Toyota name. Good handling and maneuverability, along with its tight turning radius, appeal to city dwellers. After test drives, many preferred it to the Smart fortwo and Honda Fit. Most users also like the style, claiming others often stop and ask about the car. Negatives center on engine noise when accelerating at high speeds, the lack of standard features, such as cruise control and side curtain airbags, and the low-grade plastic materials of the cabin. Several owners point out a dangerous lack of traction in winter.

Have you driven a 2008 Toyota Yaris?
Rank This Car

I Need Help With My Alternator

I have an 08 Yaris, and I just removed and replaced the alternator. The car starts, but now the AC, Blower Fan, Turn Signals, Windows, Door Locks, Side Mirrors, Rear Defogger, Radio, all do not work...

I changed tires on my 2008 yaris and the sensor lite won't go off. I am reading about resetting it but can't find a reset button. please help