The 2008 Toyota Tundra is big-enough, capable-enough, and comfortable-enough to go toe-to-toe with the Big Three’s best trucks. 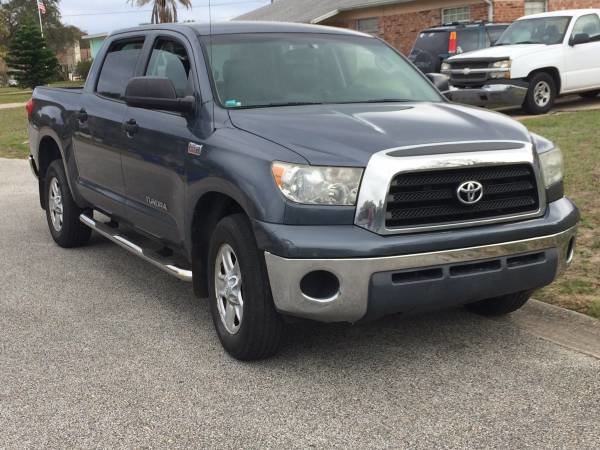 The Toyota Tundra was the first full-size Japanese pickup to hit the North American market and has won numerous awards since. Toyota expanded the 2008 Tundra lineup with more choice, more standard equipment for some models, and a new pricing model that pushes some trims below the prices we saw for last year’s truck. That expansion adds up to dozens of different trim, body, and options combinations.

The Tundra is aimed at new car buyers that want a full-size pickup with excellent projected reliability ratings and a reasonable price. It competes with the Ford F-150, Chevrolet Silverado, GMC Sierra, Nissan Titan, and the Dodge Ram. 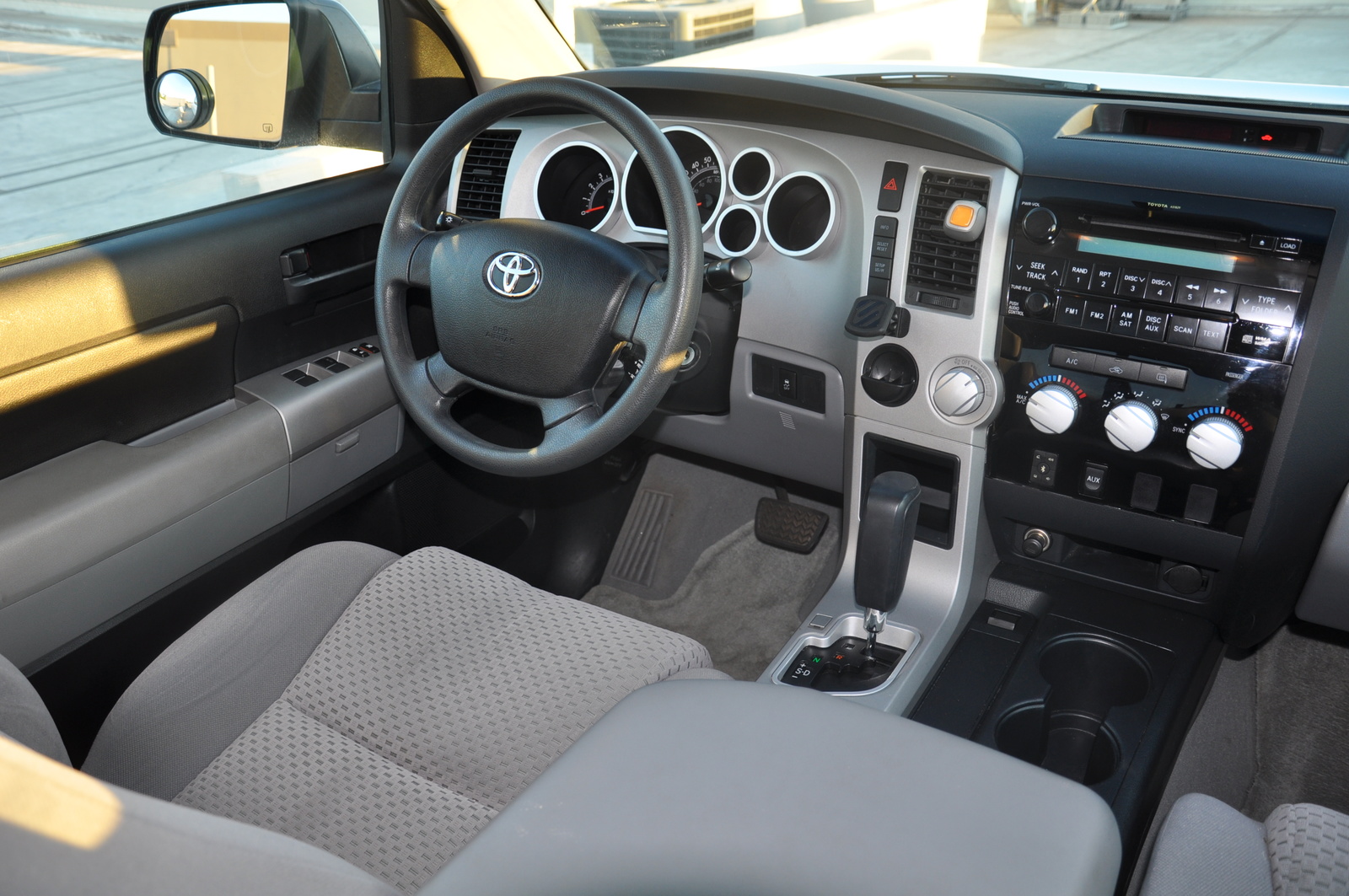 The new Tundra is bigger, stronger, and more modern than its predecessor. That’s a good thing because Toyota’s heavy investment in the vehicle has resulted in a truck that can finally compete toe-to-toe with some of the best offerings from Ford, GM, and Dodge. Toyota isn’t fooling around with an almost-full-size truck anymore, and the new Tundra’s styling reflects that mentality.

The 2008 Tundra has a large grille that can be trimmed with chrome or black plastic. The shapely hood curves down toward the grille and large headlights that are mounted high above the bumper. The rest of the truck is unremarkable—just as Toyota likes it—but handsome. The truck’s fender flares and body panels are lightly styled and don’t draw too much attention away from that sculpted nose.

The Tundra’s interior quality and list of standard features handily beats the interiors of competing trucks. The cabin is more than spacious and handles up to five people easily. The front seats are well cushioned and only mildly bolstered, which helps them remain comfortable for long periods of time. Both seats are deep, and the upholstery feels premium, even in the base models with cloth upholstery.

In regular-cab models, the passenger seat can fold flat to present a large working and writing area, and there’s enough room behind the seats to store large boxes and tools. In all cab configurations, the Tundra has several storage areas, with spaces under the seat bottoms, large door pockets, and generously sized cupholders. The back seat is generally a nice place to be, and there’s plenty of legroom for adults to travel comfortably. 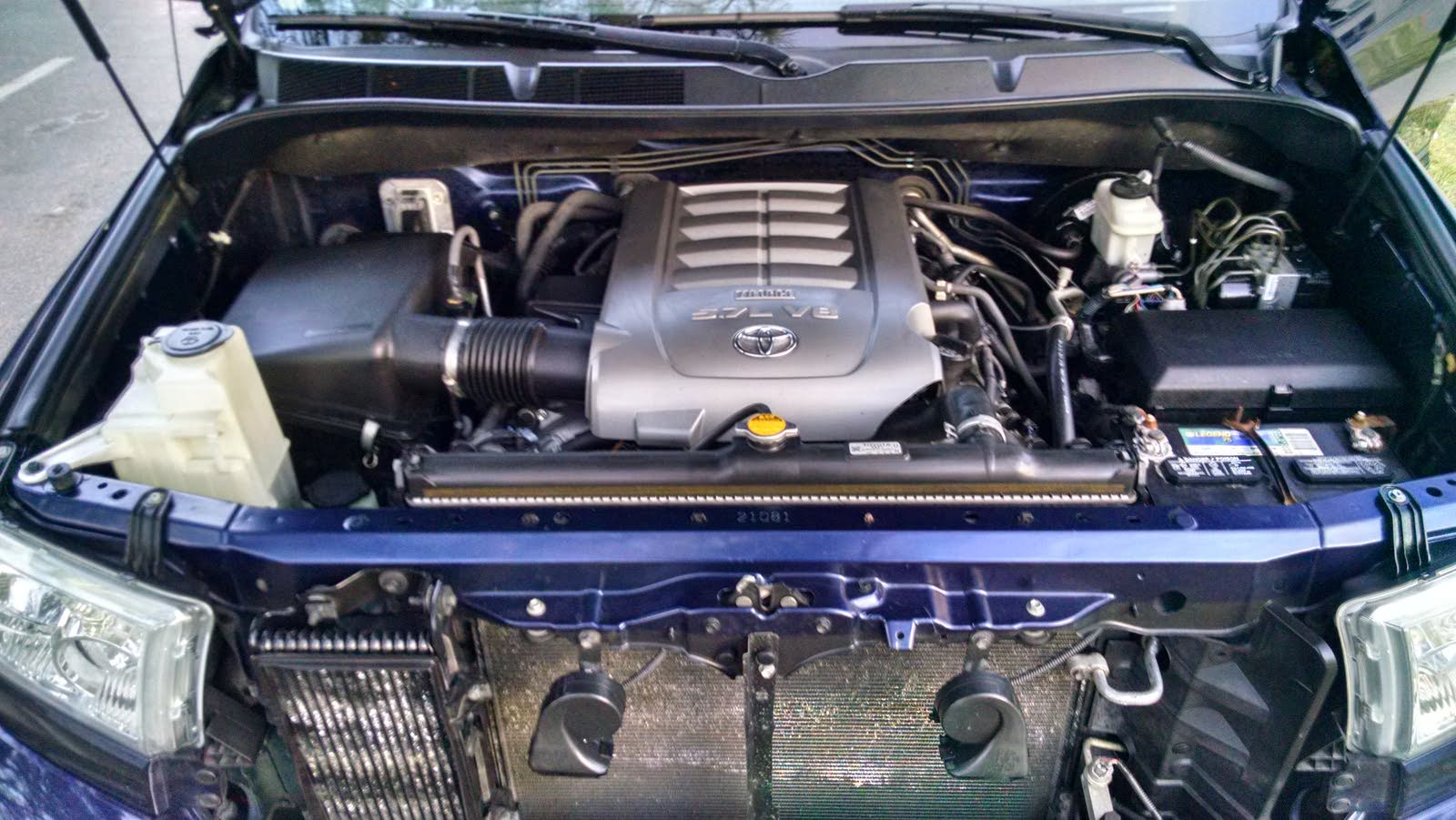 Pickup truck performance is really about three things: power, comfort, and capability. The Tundra, in most forms, nails all three. The V6 and 4.7-liter V8 are both technologically advanced and refined, but the 5.7-liter V8 is where things really start coming together for the Tundra. The engine has variable valve timing tech that helps it deliver maximum power while prioritizing fuel economy. The system also works to bump engine longevity and durability, which could mean fewer repairs down the road.

Power delivery from both of the V8 engines is smooth and linear, and both are able to get that power down at low RPM levels. The automatic transmissions are capable and find the right gear at the right time, though there is an occasional hesitance on downshifts when towing. The Tundra is rated with a towing capacity of up to 10,800 pounds, but with the V6 engine, the truck maxes out with loads that weigh as little as 5,100 pounds.

The Tundra’s fuel economy ratings are competitive in its class, but others slightly better. The 4x2 truck equipped with a V6 engine is rated at 15 mpg city, 19 highway, 17 combined.

With the 5.7-liter V8 under the hood and 4x2, the Tundra is rated at 14/18/16. Those figures change to 13/17/14 with four-wheel drive. Buyers should expect that gas mileage can change significantly while towing and carrying a heavy payload. 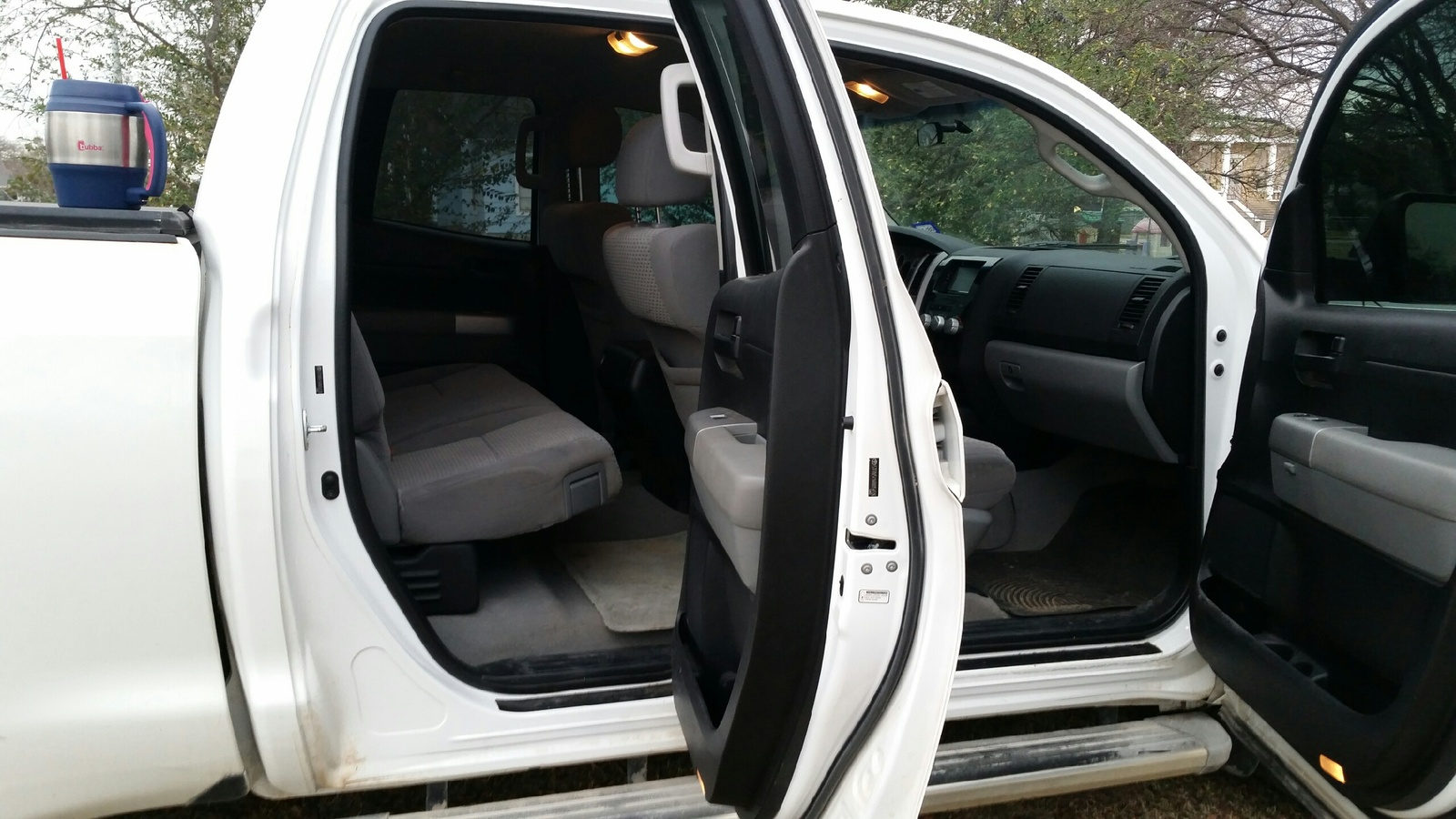 The Toyota Tundra is a full-size truck and does all the “truck stuff” with ease. On top of that, the interior is spacious, useful, and comfortable, which makes long-haul trips a pleasure. The front seats allow for multiple adjustment points to accommodate a wide variety of drivers and passengers, and outward visibility is excellent in all directions. Clever under-seat storage makes it easy to stow valuables and other items out of sight, and the fold-down passenger seat can turn the Tundra into a rolling office.

The Tundra’s size equates to a large bed, though some may find the truck’s height makes loading that bed difficult. Tailgate assist is standard, which makes raising and lowering the gate a breeze. It also makes one-hand operation much easier, as there’s no danger of the gate falling too quickly. 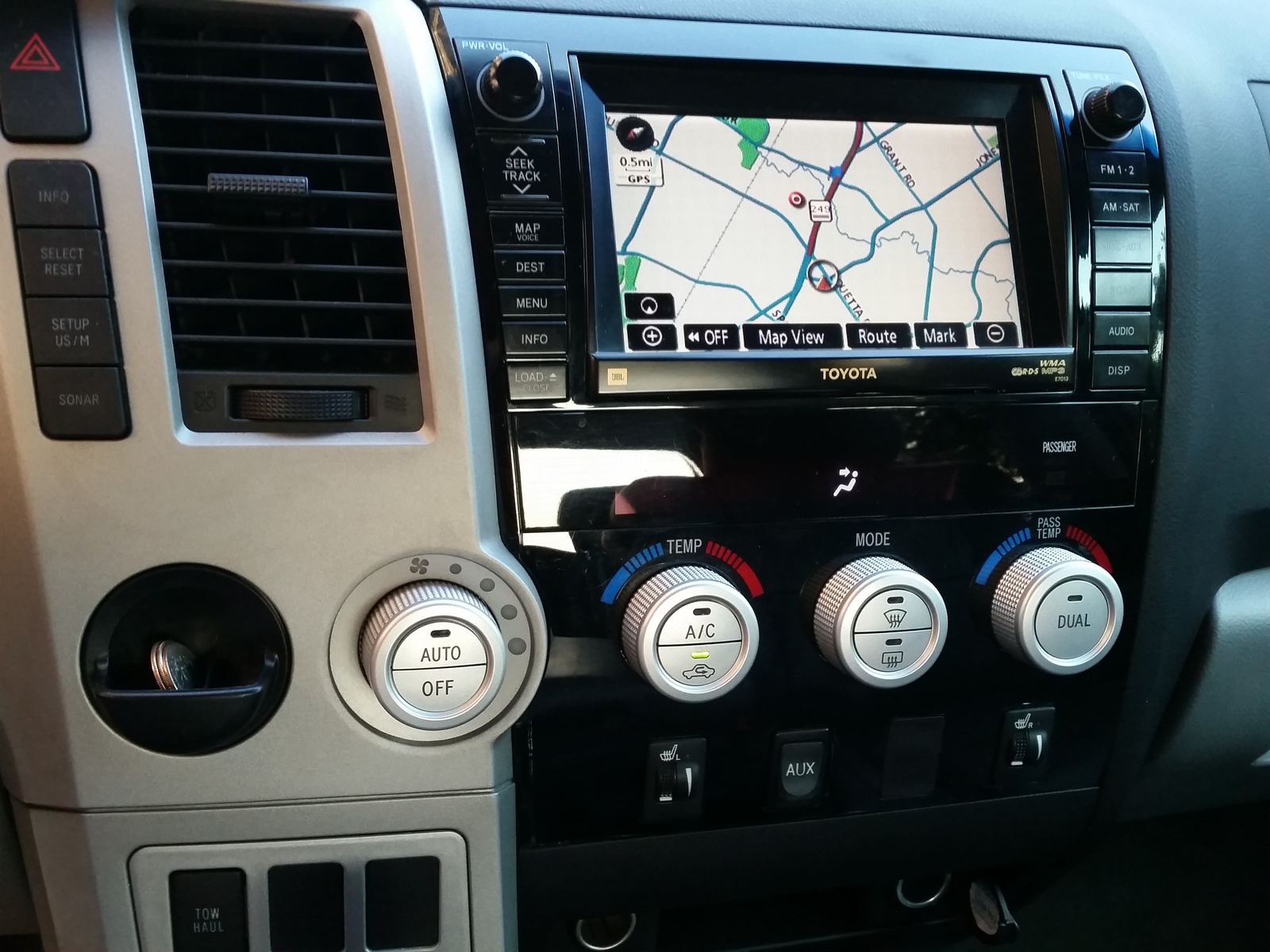 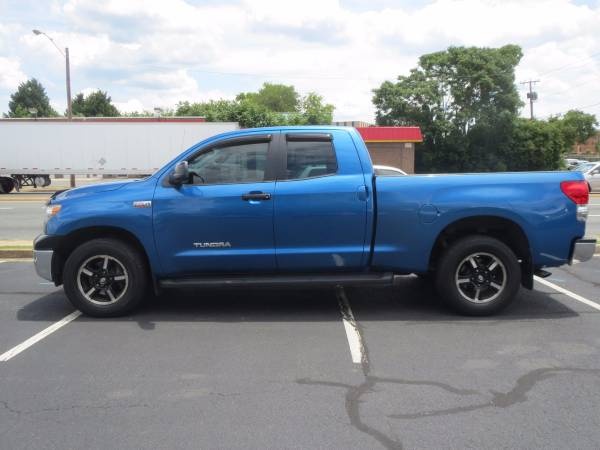 The Toyota Tundra comes standard with anti-lock brakes, electronic brake-force distribution, brake assist, a vehicle stability control system, a limited-slip differential, side curtain airbags, and curtain head protection airbags. That’s one of the most comprehensive lists of safety equipment in the pickup truck game and is a big reason why the Tundra is a top safety pick for this year. 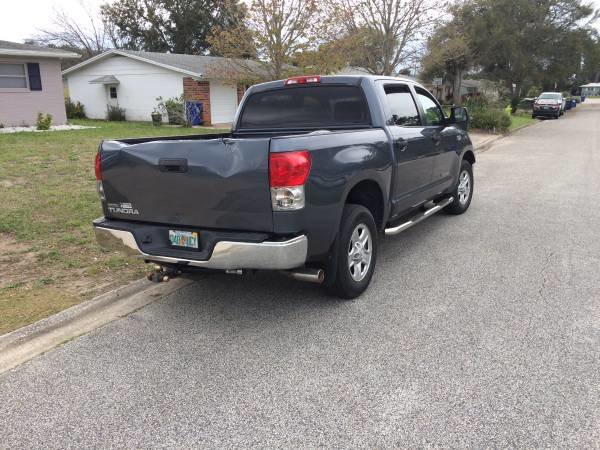 Vehicles usually increase in price over time, but Toyota took steps with the Tundra to decrease the price of some configurations. The result is a capable lineup of trucks that starts under $23,000 and ranges in price up to $40,000.

That’s in line with most of the competition. The Ford F-150 starts at a considerably lower price, around $18,000, but the Tundra’s base model comes with enough standard gear to justify its MSRP. Both trucks top out at around the same dollar amount and have similar capabilities.

The Tundra wins in the middle of its lineup, where buyers can add a powerful V8 powertrain and get a long list of standard features for less money than comparable pickups from Ford or Chevy.

Donald Love it but replacing it is costly

Users ranked 2008 Toyota Tundra against other cars which they drove/owned. Each ranking was based on 9 categories. Here is the summary of top rankings.

Have you driven a 2008 Toyota Tundra?
Rank This Car

I have the truck serviced regularly and the gas cap is always tightened past the first click.

i've noticed when i get to 60-70 mph the wheel starts shaking mildly, anyone else noticed this in a 2008 tundra 4x4 crew cab

How To Fix A Air Mass Flow Code

I have a 2008 Toyota tundra 4x4 5.7 sr5 and I had the engine light come on because of the massive air flow code so I change the air sensor but it stills comes on after when I put a new one in and ...

I Have Dashboard Lite Up Like A Christmas Tree!

808tundra answered 3 years ago I have the same problem vsc, abs 4hi 4lo, flashing. truck runs and is able to drive but when i drive it rpm don't work indicator lights flashing and speedometet bounce...

On my 08 tundra 4X4 dbl cab, the brake pedal will slowly go to the floor when at a stoplight. Feels like the old days when you had to pump the brakes. My first thought is the master break cyl but ...