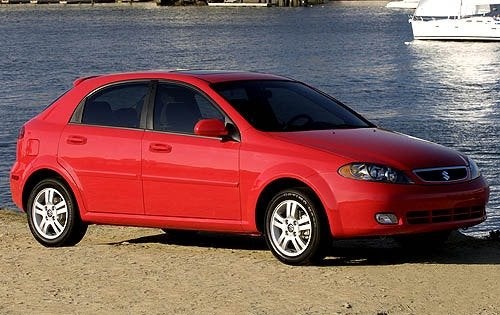 Looking for a Used Reno in your area?

CarGurus has 13 nationwide Reno listings and the tools to find you a great deal.

A name can carry a lot of weight, conjuring up a whole host of associated images. Case in point: the 2008 Suzuki Reno. Just as the city of Reno is the poor man's Las Vegas, so is the Suzuki Reno the poor man's Mazda3 or Toyota Matrix. As Suzuki's least expensive car, this compact hatch represents great value for budget-conscious first-time buyers, but critics and owners seem to agree that its interior space and long list of standard features don't offset its sluggish performance and cheap materials. For 2008, the front-wheel-drive hatch receives two new options - Bluetooth and wheel-mounted cruise and audio controls. Otherwise, the Reno remains unchanged, perhaps in preparation for its imminent demise.

The 2008 Reno comes in Base and Convenience trims, each powered by a 127-hp, 2.0-liter inline four that gets 131 ft-lbs of torque and 20/28 mpg. A 4-speed automatic or 5-speed manual are the available transmissions. It shares its chassis and powertrain with the Forenza, but adds a more stylish profile to appeal to younger buyers looking for a deal. Base trims are well equipped with full power features, a CD player with MP3 input jack, heated mirrors, and a roof rack. The Convenience adds the wheel-mounted audio and cruise controls, leather trim, and remote entry. Dual front-side airbags are standard, along with 4-wheel disc brakes, but ABS brakes are offered only as an option. The Reno receives an acceptable rating from the IIHS and four stars from the NHTSA in crash tests.

Have you driven a 2008 Suzuki Reno?
Rank This Car

Looking for a Used Reno in your area?

CarGurus has 13 nationwide Reno listings and the tools to find you a great deal.

How do I check fuel pressure before the injectors on a 2011 suzuki sx4?

I have a Suzki Reno 2008, when putting the car into drive, on the speedometer display where it is supposed to show D there is a flashing wrench. Anybody?

What Happens When You Put Too Much Oil In The Car/