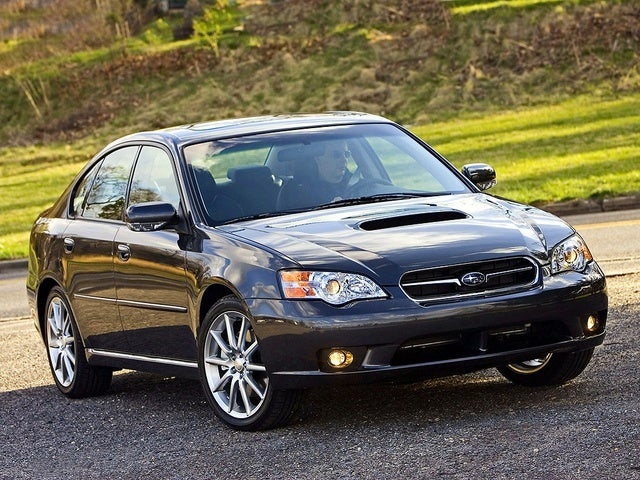 The Subaru Legacy will see several minor changes for 2008, including new instrumentation, an MP3 input jack, and a tilt/telescoping steering wheel. The new model year will also bring some trim-level adjustments. The wagon body style has been discontinued, and a performance-oriented 3.0 R Limited style has been added.

There are six Legacy styles to choose from, including the base 2.5i, 2.5i Special Edition, 2.5i Limited, 2.5 GT Limited, 2.5 GT spec B and 3.0 R Limited. Subaru's top-shelf sedan is available with three engine options, depending upon the trim. All styles badged 2.5i are powered by a 2.5-liter flat-four-cylinder engine, which generates 175 horsepower and 169 pound-feet of torque. These sedans can be equipped with either a five-speed manual or a four-speed automatic transmission. The 2.5 GT Legacy houses a turbocharged version of the flat-4, bumping horsepower to 243 and torque to 241 pound-feet. Buyers may select from two transmissions again, but the automatic is upgraded to a five-speed on this trim. The GT spec B features a six-speed manual. The top-of-the-line 3.0 R Limited gets a 3-liter flat six, good for 245 horsepower and 215 pound-feet of torque. This engine is teamed with a five-speed automatic with paddle shifters.

There is considerable variation from trim to trim, with respect to features, but all 2008 Legacy models will come standard with air-conditioning, an MP3-compatible audio system with a portable device input jack, keyless entry, a trip computer and full power accessories. Mid- and upper-level trims are also eligible to receive an optional navigation system.

In the past, owners and reviewers have praised the Legacy for its controlled and forgiving ride, strong acceleration, and thoughtfully designed interior. The Subaru flagship has continued to receive the highest acclaim for safety, and the IIHS has bestowed its high honors on the 2008 model after initial crash tests. All-wheel drive is standard on all variants. The 2.5i models offer adequate performance, but enthusiasts should consider the GT trims, for more responsive steering and agile handling, despite some turbo lag off the line.

Inside, all Legacy models offer a well-crafted cabin, despite the inclusion of some lower-grade materials. Front and rear seats are accommodating, but taller passengers may run out of headroom in the rear quarters. Many drivers have reported that the Legacy could be a bit quieter: Although the turbocharged engines are quite refined, they display noticeable rumble and wind noise at higher speeds.

Users ranked 2008 Subaru Legacy against other cars which they drove/owned. Each ranking was based on 9 categories. Here is the summary of top rankings.

Have you driven a 2008 Subaru Legacy?
Rank This Car

MasterK1ller3YT asked a 2008 Subaru Legacy 2.5 i Limited Maintenance & Repair question about a month ago

What Tools Do I Need To Replace A Waterpump And Timing Belt?

Which Car With Towing Hook Would You Recommend To A Small Farmer?

My dad is a small farmer and needs a new working vehicle. He sells his meat in a nearby city every 2 months and brings it in a trailer that weighs all in all about 1.5t. The travel distance is about...

29 views with 7 answers (last answer about a year ago)

Erik asked a 2008 Subaru Legacy 2.5 i Car Customization question about a year ago

I was wondering what I can install on my 2.5i n/a motor to give me a little more power mostly any ideas on an intake that will actually fit also can I add a turbo to this motor without having to s...

Sam asked a 2008 Subaru Legacy 2.5 i Special Edition Maintenance & Repair question about a year ago

When I'm steering I'm getting a bad jerk and knocking in my steering wheel and it seems to be much worse on left turns. But it only happens in the cold or on slick roads or snow. I have brand new h...

26 views with 9 answers (last answer about a year ago)