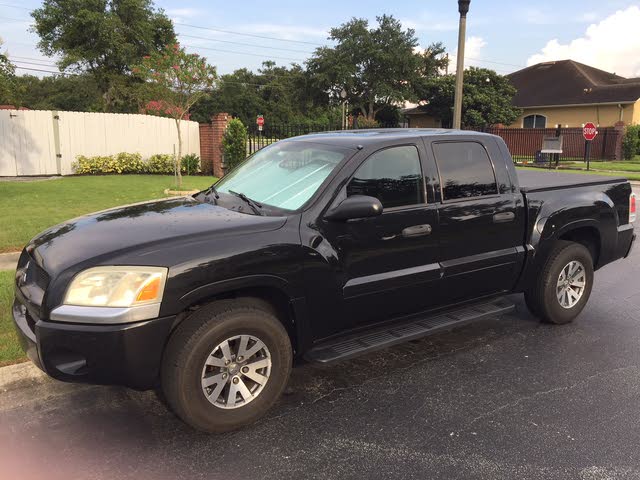 The Mitsubishi Raider midsize pickup, which shares a chassis with the Dodge Dakota, dumps its SE trim along with the V8 engine, rendering the 2008 edition pretty much indistinct from the rest of the class. According to Mitsubishi, its 5-year/60,000-mile limited warranty remains the best for a pickup, however.

The 2008 Raider comes in LS Extended and LS Double Cab trims. The Extended offers a longer, 6.4-foot pickup bed, but a smaller backseat (with only 32 inches of legroom) that is accessed through wide-opening reverse-hinged doors. The Double Cab reduces bed size to 5.3-feet, but offers four more inches of rear legroom and four conventional doors. Both are powered by a 3.7-liter SOHC V6 that gets 210 hp and 235 ft-lbs of torque. A 6-speed manual or 4-speed automatic is available for the Extended models, while the Double Cab comes with the automatic only. Rear-wheel drive is standard, with part-time 4WD offered in the LS Double Cab. The system does feature low-range gearing, meaning the 2008 Raider can be taken off road. Extended trims start with air conditioning, a CD player, split-folding front seats, and an MP3 input jack, while the Double adds power features, remote entry, cruise control, a sliding rear window, and folding rear seats.

Mitsubishi touts its heavy-duty suspension, stiffer hydroformed frame, front and rear stabilizer bars, and combination of a double wishbone front and live axle rear suspension as contributing to an improved safety and handling profile. However, IIHS tests rate the 2008 Raider as average, probably due to its lack of standard side curtain airbags. Dual front airbags with passenger deactivation, rear-wheel ABS brakes, 16-inch wheels with a tire monitor, front and rear crumple zones, side impact beams, and more rigid front frame rails that distribute crash impact forces are all standard.

Reviewers are less than thrilled with the V6 power in the 2008 Raider, which tows nearly 3,000 pounds in Extended trims and 4,000 pounds in the Double Cab. Poor resale value and missing safety features (no traction or stability control offered) keep this pickup from being a real power player in the field.

What's your take on the 2008 Mitsubishi Raider?

Have you driven a 2008 Mitsubishi Raider?
Rank This Car

I Am Interested In A Mitsubishi Raider, But There Has Been Some Leaks That ...