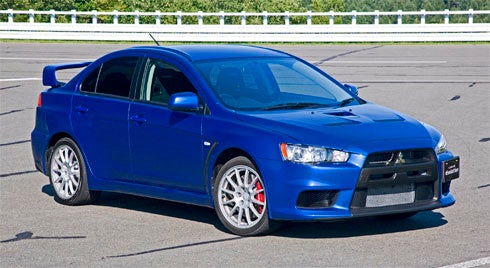 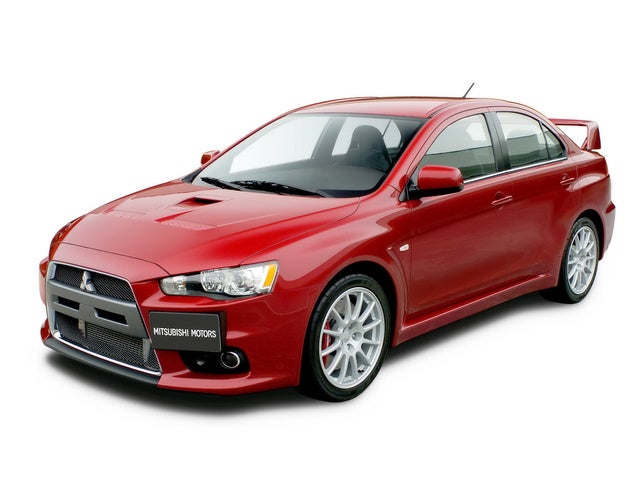 A quick look at a few significant numbers will tell you a lot about the 2008 Mitsubishi Lancer Evolution: 291 hp, 300 lb-ft of torque, and 0 to 60 in about 5 seconds. Those numbers add up to raw power and performance. Mix in sports antilock brakes with Brembo calipers, a functional rear spoiler, and Super All-Wheel Control, which regulates torque at each wheel, and you begin to get the picture. Fast, sleek, and sporty, the 2008 Lancer Evolution packs of lot of performance-oriented components into its race-car-inspired design and delivers impressive handling.

The Lancer Evolution comes in GSR and MR trims for 2008. At the heart of both trims beats a turbocharged and intercooled 2.0-liter inline four-cylinder (I4) engine, which pumps plenty of horsepower to the drivetrain. In the GSR trim, the engine links to a five-speed manual transmission, while in the MR trim the turbocharged four-cylinder mates to a new six-speed Twin Clutch Sportronic Shift Transmission, with a manual shift feature and magnesium paddle shifters mounted on the steering wheel. Advanced gear selection technology helps the driver get from gear to gear faster than with a typical manual transmission. In addition, drivers can choose from Normal, Sport, or Super Sport shift modes. With the manual transmission, the GSR manages 16/22 mpg, while the MR achieves slightly improved fuel economy of 17/22.

An exhaust system that disperses heat more rapidly also helps to improve the Lancer Evolution's performance, while the rear location of the exhaust manifold improves the car's weight distribution. Body and suspension features include MacPherson struts in the front, a multi-link-type suspension in the rear, and front and rear stabilizer bars, which help provide better handling and stability.

The car's performance orientation continues to its interior, thanks to such features as race-inspired Recaro seats with integrated side airbags and a high-contrast instrument cluster designed for easy readability. Keyless entry, cruise control, and power windows and door locks also come standard. The MR adds Bluetooth wireless connectivity for hands-free phone calling. Both trims come equipped with a 140-watt six-speaker audio system with a CD player and MP3 connectivity. Drivers can opt for a 650-watt Rockford-Fosgate audio system with a 6-CD changer and Sirius satellite radio. Other options include a 30-gigabyte hard-disc-based navigation system with a 7-inch touchscreen.

Standard safety features include antilock brakes and a full range of airbags, including side-impact head-protection curtain airbags and a driver's-side knee airbag.

Most owners, including CarGurus owners, give the Lancer Evolution high marks for performance and handling, and many call it the best-performing car in its class. Some even equate the nimbleness of its handling to that of a motorbike's, while others put the Lancer Evolution on the same performance level as the Porsche 911. Drivers also like the car's exterior design and its sound system. However, some would like to see a more upscale interior, while others consider the car pricey. But most agree the car delivers in the performance arena in a big way.

What's your take on the 2008 Mitsubishi Lancer Evolution?

Users ranked 2008 Mitsubishi Lancer Evolution against other cars which they drove/owned. Each ranking was based on 9 categories. Here is the summary of top rankings.

Have you driven a 2008 Mitsubishi Lancer Evolution?
Rank This Car

New To Site. I Can't Find My Car For Sale. Can You Help?