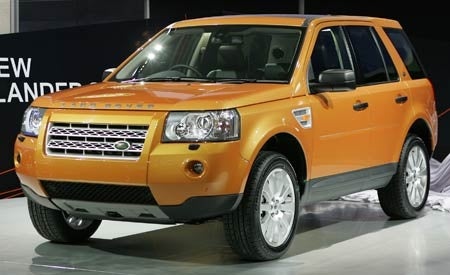 All-new for 2008, the LR2, from British automaker Land Rover, is a compact SUV that replaces the Freelander in the automaker's lineup. The LR2 is smaller than the Range Rover and LR3, though it packs a lot of features and technology into its more compact unibody frame.

For starters, under the hood of the LR2 is a new 3.2-liter, 24-valve, all-aluminum six-cylinder engine that produces 230 horsepower. The inline six, which was developed by Volvo, is mounted horizontally in the engine bay. The engine is linked to a smooth-shifting six-speed automatic transmission with normal, sport, and manual-shift modes, and powers a full-time four-wheel-drive system.

One of the LR2's best features is the Terrain Control system, which enables the driver to adjust the LR2's engine, transmission, brakes, traction control, and stability control system for optimal driving in various conditions. By turning a knob located on a panel on the console, the driver can select from four modes, including normal, gravel, snow, and sand.

That's just one of the LR2's many features designed to improve the driving experience, including Electronic Traction Control, Roll Stability Control, Hill Descent Control, Corner Brake Control, and Dynamic Stability Control, which adjusts power and braking in an emergency situation to control skidding.

Drivers of other Land Rovers will find the LR2's cabin familiar, spacious, and well-equipped with such standard features as leather-trimmed seats, a dual-panel sunroof, cruise control, power-adjustable front seats, dual-zone automatic climate control, and a nine-speaker AM/FM audio system with an in-dash six-disc CD changer and an MP3 input jack.

A number of options packages are available, including a Cold Climate Package with heated front seats and a heated front windshield, a Technology Package with a DVD-based GPS navigation system and Sirius satellite radio, and a Lighting Package with an Adaptive Front Lighting System, in which the headlights swivel in sync with the steering wheel.

GuruP9HPR The freelander was the same but slightly older version of what they are now calling an LR2. It's very quick handles like a dream. Climbs well if you want. And looks great!!

my remote will not work for my LR2 2008 land rover i just bought and the key does not go in to unlock the car manually is there another way to program the key because everyone near me says they cant...

my land rover LR2 2008 model showing message on screen (STEERING COLUMN LOCKED), actually steering not locked but car is not starting at all, it is push button to start, checked battery, fuses,star...

How Do I Reset The Sunroof Control Module On A 2008 Land Rover LR2?

Sunroof stopped working after a voltage spike. I replaced the fuse, but have heard there's a process to reset the control module (before I replace the switch or motor).

What Is This Vehicals Main Technical Difficulty

My car doesn't start the lights on the dashboard saying , Steering Column Locked?

31 views with 4 answers (last answer about a year ago)