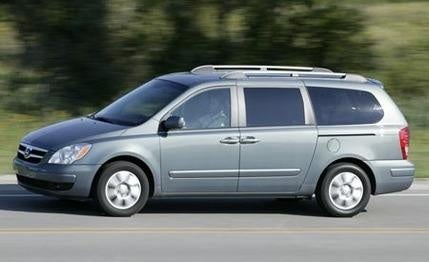 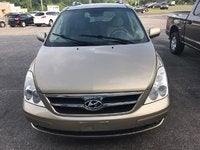 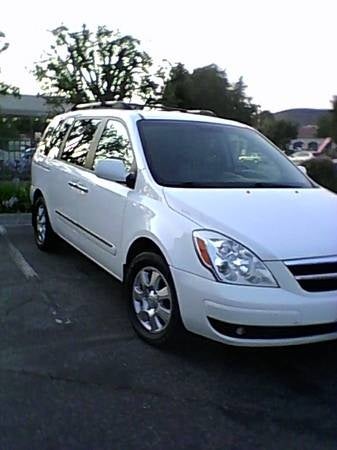 The family-friendly Hyundai Entourage offers plenty of interior space for kids, pets, and grownups, making it a great around-town functional minivan. But it also happens to be one of the safest vehicles available for 2008. For starters, the Entourage received the best crash-test rating ever awarded to a minivan by the Insurance Institute for Highway Safety. It comes equipped with six standard airbags, including side curtain airbags for passengers in all three rows of seats. Other standard safety features include active front head restraints, antilock brakes, and electronic stability control, which helps keep the minivan from fishtailing on curves (oversteer) or plowing off the road (understeer) by applying appropriate braking to either the front or rear wheels.

A 242-horsepower, 3.8-liter, double-overhead-cam V6 engine powers the Entourage, which comes in GLS and Limited trims for 2008. The engine provides good performance, according to drivers and reviewers, though gas mileage lacks somewhat. The engine links to a driver-adaptive five-speed automatic transmission with Shiftonic, which enables the driver to shift manually by tapping the gearshift up or down.

The exterior and interior design of the 2008 Entourage, as well as the standard feature list, carry over from the previous year with few changes. On the outside, the Entourage displays a contemporary design, with a V-shaped hood, projector-beam headlights, sculpted front fenders and bumper, and standard roof rails. The Limited trim adds front foglights, dual real power sliding doors, a power tailgate, and 17-inch alloy wheels.

Inside, features include seating for seven passengers, as well as cruise control, a keyless entry system, a tri-zone climate control system with rear air conditioning, and a six-speaker AM/FM/CD audio system. The Limited adds leather seats, heated front seats, and wood grain or metal trim. A 660-watt, 13-speaker Infinity Logic7 audio system with a six-disc CD changer has been added to the option list for 2008 for both trims.

The Entourage has an expansive, comfortable, and well-thought-out interior, according to drivers and reviewers. They also note that the front-wheel-drive vehicle is quiet, capable, and nimble on the road, with good handling for a minivan its size. Some drivers and reviewers note that the Entourage's ride can feel harsh at times, while others note that design-wise, the Entourage can be hard to distinguish from the Kia Sedona, with which it shares a platform, and the Honda Odyssey. Price-wise, the Entourage represents a good value, with incentives and rebates making it even more competitive, though its resale value can suffer. Overall, however, the Entourage gets good marks, making it a valid choice for those who need plenty of room to safely haul around a large family.

What's your take on the 2008 Hyundai Entourage?

Users ranked 2008 Hyundai Entourage against other cars which they drove/owned. Each ranking was based on 9 categories. Here is the summary of top rankings.

Have you driven a 2008 Hyundai Entourage?
Rank This Car

Where is the voltage regulator on 2008 Entourage?

I was driving not going fast. My battery light and break light came on and flickered then all the other lights came on and the van stauld. Wouldnt start unless I had a jump start . Then it wouldn...

43 views with 3 answers (last answer about a year ago)