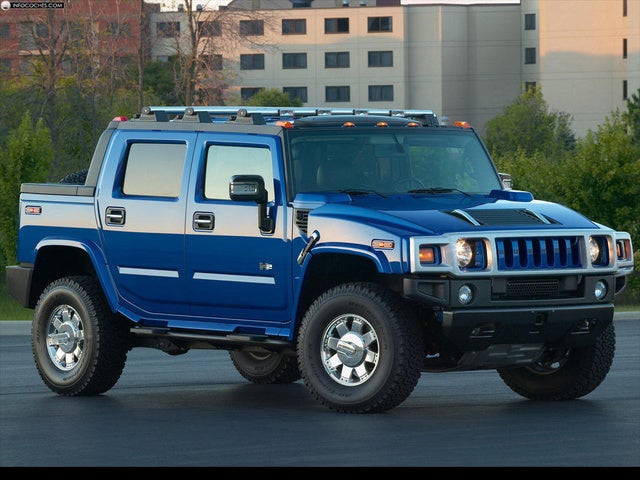 Looking for a Used H2 SUT in your area? 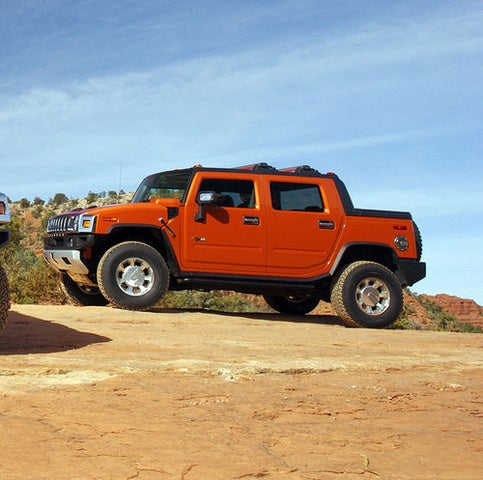 For 2008, the Hummer H2 SUT receives a more powerful engine and a more luxurious interior, but still retains its functional and versatile pickup-truck-style design. With the normal configuration, the H2 SUT features two rows of seating and a three-foot-long open cargo bed behind the rear bulkhead, or Midgate, as Hummer calls it. However, with the rear window lowered into the Midgate, and the Midgate and rear seat folded forward, the cargo bed can be extended to six feet.

By lowering the windows and opening the sunroof, all of which can be opened easily at the touch of a button thanks to an express-down feature, drivers can experience near open-air driving.

The Hummer H2 SUT receives minor exterior upgrades for 2008, mostly in the grille and front fascia area. But the interior receives a major upgrade. New front seats feature leather piping and have what Hummer calls a chiseled appearance for improved comfort. Front seat belts now mount to the B-pillar rather than to the seats themselves, a configuration that drew complaints from some drivers of earlier Hummers.

Other new interior features include the six-gauge instrument panel, door trim panels, and center console, which houses the climate controls and a standard Bose sound system with XM satellite radio.

The 2008 Hummer H2 SUT also receives a new and more fuel-efficient (according to Hummer) 393-horsepower, 6.2-liter V8 engine. The engine links to a new Hydra-Matic six-speed automatic transmission. As a result of this upgraded powertrain, the Hummer H2 SUT's towing capacity has jumped from 6,500 pounds to 8,000 pounds.

There are also a number of new features under the Hummer H2 SUT's muscular exterior, including a new traction control system, a tire pressure monitoring system, an electronic stability control system with rollover mitigation technology, and a panic brake assist feature, which applies maximum pressure in an emergency situation to stop the vehicle safely.

Looking for a Used H2 SUT in your area?

Transmission works great cold after warm-up it will occasionally drop to second gear and stick . if you stop turn engine off for a few seconds it stars and will operated properly until it happens ag...