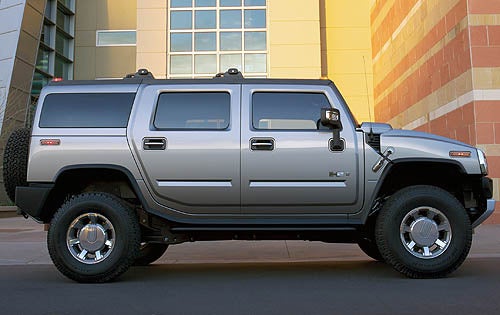 The term "rugged luxury" best sums up the Hummer H2, which received a fairly extensive upgrade for 2008. You wouldn't know that by looking at the big SUV's exterior, though, where it received only minor makeovers, mostly in the grille and front fascia area. All the good stuff for 2008 takes place inside and under the hood of the H2, where it really counts.

Hummer's designers were going for comfort when they gave the H2's interior a revamp. Everything from the seats to the dashboard to the seat belts came under scrutiny, and were ultimately replaced with better gear. The new seats, for instance, feature leather piping and have what Hummer calls a chiseled appearance (we assume that's a good thing) for improved comfort. Front seat belts now mount to the B-pillar rather than to the seats themselves, a configuration that drew complaints from some drivers of earlier Hummers.

Other new interior features in the 2008 Hummer H2 include the six-gauge instrument panel, door trim panels, and center console, which houses the climate controls and a standard Bose sound system with XM satellite radio. Hummer also added a full third-row seat for two passengers, and a new rear-seat heating and cooling system, as well as a raft of new options such as premium sound systems and a rear-seat DVD entertainment system.

The upgrades extend to the engine bay, where Hummer dropped a new and (according to Hummer) more fuel-efficient 6.2-liter V8 engine that produces 393 horsepower, an increase of nearly 70 horsepower from the previous year. The engine links to a new Hydra-Matic six-speed automatic transmission. As a result of this upgraded powertrain, the Hummer H2's towing capacity has jumped from 6,500 pounds to 8,000 pounds.

There are also a number of new features under the Hummer H2's skin, including a new traction control system, a tire pressure monitoring system, an electronic stability control system with rollover mitigation technology, and a panic brake assist feature, which applies maximum pressure in an emergency situation to stop the vehicle safely.

How To Tell If Lien Is Released

Can A Business Sell A Car On This Site?

We are an automotive repair shop. Can we sell a vehicle on this site as a business??

I have pre approved financing through my banking institution, however there is a purchase stipulation of buying from a certified dealer ONLY. If a private owner were to advertising the sale of thei...

If I drive over 15 miles it shuts off after I get off of the freeway, When the rpms drop to idle it shuts off. took it to the dealer and they are guessing. they are now telling me I might need a new e...