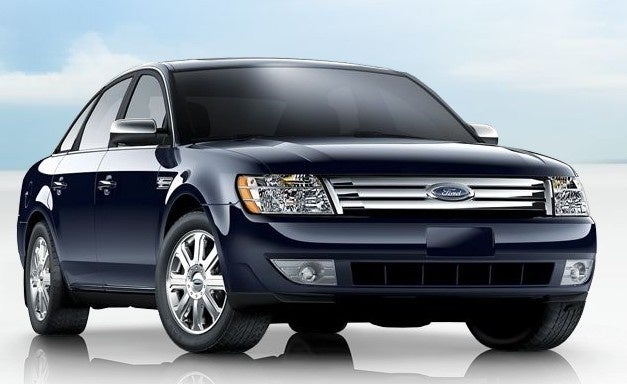 Yes, it's back. The Ford Taurus, which during the early 1990s was the bestselling car in America, and which was dumped from Ford's lineup after the 2005 model year due to low sales, returns triumphantly to showrooms... sort of.

In truth, though the name is familiar, the car it's attached to is completely different from the old Taurus. It's actually the latest version of the Ford Five Hundred, which was introduced in 2005 as a replacement for (you guessed it) the Taurus. The Five Hundred has been only marginally successful since its introduction, however, so when Alan Mulally took over the reins as Ford's new chief executive, he decided to scrap the Five Hundred name and rebadge the latest version of the car as the 2008 Ford Taurus.

Like the old Taurus, the 2008 version features family-friendly styling, although it's larger than the old Taurus, and comes with a bigger price tag as well. The 2008 model also has a more contemporary grille, and a 3.5-liter V6 generating 260 horsepower, which is an increase of almost 60 horspower over the previous year's Five Hundred/Taurus. The 2008 model also is equipped with a new six-speed automatic transmission. Four-wheel-drive is optional.

Ford will also slap the Taurus X badge on its Freestyle crossover vehicle. So it looks like the Taurus name is here to stay...for now.

George The 2008 Taurus provides class-leading safety, a spacious cabin and good fuel efficiency at a comparatively low cost. However, it doesn't even try to match the driving performance or visual appeal of some of its competitors.

Have you driven a 2008 Ford Taurus?
Rank This Car

I have a 2008 Ford Taurus that has clicking sounds behind the glove box. My AC recently went out and wondering if that has anything to do with it? I have charged my AC and no luck. The other day I a...

Can anyone give me advice about this to let me know if it's even possible?

I have a 2008 Ford Taurus with 125k on her. A few days ago I got a check charging system warning, however minutes later it turned off and did not reappear for the rest of my 20 minute drive. About...

Why Is My Battery Boiling?

It has a short somewhere I believe and is making the battery boil, fuse metal turn black from heat, and the positive lead on battery extremely hot. The battery and alternator are good I recently h...