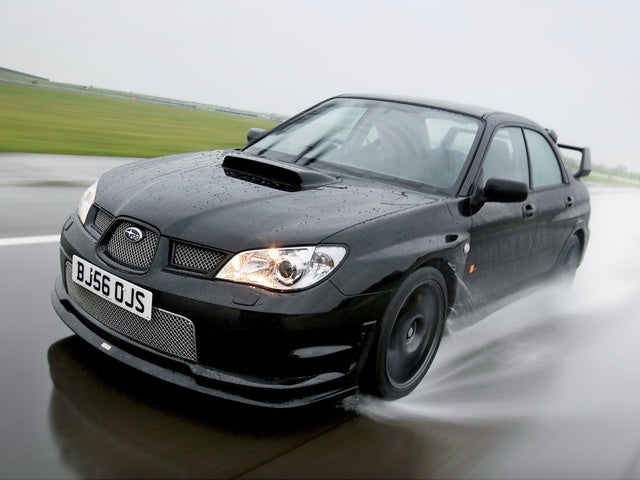 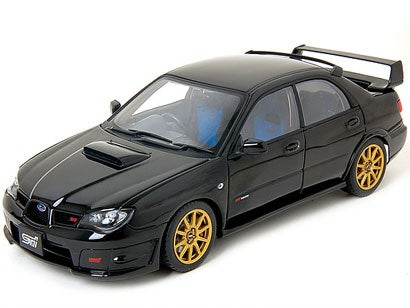 Almost used in the Fast and the Furious, the WRX STi is the top-of the line Impreza model, featuring rally car performance and extravagant "look at me" style to play up the thrilling driving experience. All this with Subaru's all-wheel drive reliability and high safety record.
The sedan-only 2007 Impreza WRX STi has one major change this year, the addition of the WRX STi Limited, which carries a more luxurious interior and creature comforts than the lighter weight regular STi. Both trims feature the turbocharged 2.5-liter DOHC 4-cylinder, hitting 293-hp, wiht a 6-speed manual. Brembo brakes, a limited slip differential, sports-tuned suspension, and Driver Control Center Differential (which allows you to auto or manually distribute torque) are performance-enhancers. On the outside, the regular STi shows off a huge dual-plane rear spoiler, roof vane spoiler, giant head scoop, and either gold or silver wheels. For 2007, the Impreza WRX STi Limited tones it down with a smaller rear wing, no vane, and an integrated chin spoiler.

The Limited also features leather seats, to the regular STi's Alcantara cloth ones. For the first time in any STi, the Limited also pampers you with heated seats and a power sunroof. Other standard features include satellite radio, an iPod jack, and auto-dimming rearview mirror. While these help add a layer of elegance to the 2006 WRX STi, what really makes this sedan stand out is its road-burning performance and tight handling.

What's your take on the 2007 Subaru Impreza WRX STI?

Have you driven a 2007 Subaru Impreza WRX STI?
Rank This Car

Hey guys I am looking to purchase a 2007 Subaru wrx sti. Car looks really good in condition has 210k on it but was rebuilt at 140k when I went to get inspected the guy said car looks very clean, n...

Planning To Buy A Subaru Wrx Sti 2007, I Was Just Wondering How Much The Ma...

I Have A 07 Subaru Sti And When I Turn It Makes A Popping Sound Can Someone...