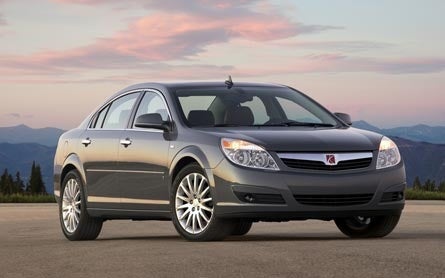 The 2007 Saturn Aura represents Saturn's first venture into the mid-size sedan market since the L-Series franchise folded in 2004. With a re-designed interior, sporty exterior, and solid V6 power, this new model indicates that Saturn has learned from the past as it looks to the future. Options include leather seating, sunroof, and an audio system with 240 watt amplifiers. Highly rated front, side, and ceiling mounted airbags come standard, further affirming Saturn's commitment to safety.

The Aura has two trims: the XE sedan and the XR sedan. The XE uses a 3.5 L, 224 hp V6 engine with 4 speed automatic transmission while the XR has a 3.6 L, 252 hp engine with 6 speed automatic. The XE gets 20 mpg city/29 mpg highway and the XR gets 20 mpg city/28 mpg highway. The Aura seats 5 and trunk space comes in at a reasonable 15.7 cubic feet, placing it at around the average for mid-size sedans.

Overall, consumers appreciate that they can buy a stylish sedan from Saturn without breaking the bank. Reviewers report that the 2007 Aura provides a smoother, quieter ride because it has less plastic in its body. Saturn has given the public a solid domestic sedan that should evolve over time. Look for a hybrid model later on in 2007 as the Aura caters to an environmentally conscious clientele.

Have you driven a 2007 Saturn Aura?
Rank This Car

I have a 2007 Saturn Aura 3.6 I changed the ECM and my service traction comes on and stays on. The car runs fine ?

I Have A 07 Saturn Aura. I Did Not Lock The Door When I Got Out Of It But It Has Had A Problem Locking And Unlocking It’s Self. The Door Lock/ Unlock Button Doesn’t Work And Now My Key Doesn’t Wor...

Once a week I have to get a jump. It will run fine for a week and then need to jump again. The run/start, crank Relay ticks when this happens! Any ideas?