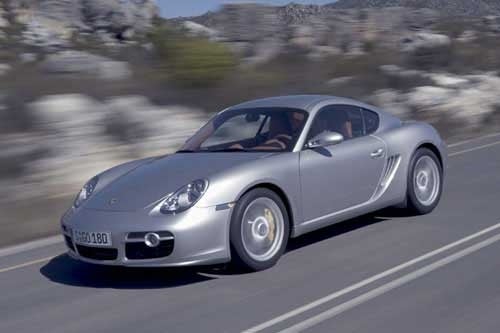 Like the Porsche Boxster, with which it shares a platform, the 2007 Porsche Cayman is a mid-engined sports car, meaning that the engine resides behind the passenger compartment but ahead of the rear axle. But even though they share a platform, the Boxster and the Cayman are completely different vehicles. The obvious difference is that the Boxster is a convertible (or cabriolet for the purists) while the Cayman is a two-passenger, two-door coupe. But there are styling and engineering differences as well that make each vehicle distinctive.
Two versions of the Cayman were available for 2007. The base Cayman, new for the 2007 model year, was powered by a 2.7-liter, horizontally opposed six-cylinder engine that produces 245 horsepower, while the Cayman S, introduced a year earlier, is equipped with a 3.4-liter six-cylinder engine that generates a respectable 295 horsepower.
A five-speed manual transmission is standard on the base Cayman, while the Cayman S gets a six-speed manual as standard equipment (available as an option on the base model). A five-speed Tiptronic automatic transmission, with a gate for manual shifting, is optional on both vehicles.
Styling-wise, the Cayman borrows a number of design cues, including its nose, roofline, and side air intakes, from some of the 911 models. But it presents those elements in an overall fresh design that fits in well with Porsche's lineup of sports cars.
Standard features for the Cayman are extensive, and include air conditioning, power windows, power door locks, leather seats, dual front and side airbags, cruise control, a trip computer, a leather-wrapped steering wheel and shift knob, power exterior mirrors, and an AM/FM stereo system with a CD player.
Other features included traction control, stability control, four-wheel anti-lock brakes, and 18-inch alloy wheels with performance tires.
Drivers noted that the Cayman compared favorably with a number of other exotic sports cars, including models from Ferrari and Aston Martin, elevating the Cayman to high status indeed. The car's handling, acceleration, interior, exterior design, engine note, and both manual and automatic transmissions all received high marks from drivers. On the downside, drivers noted that visibility out the rear was poor, and that power was lacking at the low end.

What's your take on the 2007 Porsche Cayman?

ShrugItOff I own a 2007 Cayman - Black on Black. It is the hottest car around you don't see many of them. Women love it too! Performance is so-so actually, but overall it is the best sports car for the money, hands down.

Have you driven a 2007 Porsche Cayman?
Rank This Car

I have already taken photos. Clicking on the button for adding them takes me to a page where they load, but there is no "exit" from this page and I cannot preview them. The preview page has no photos....

Why Don't You Have A Sent Folder. I Have Replyed To 3 People With No Respon...

What are maintenance costs for a porsche cayman

What The Hell Are You Talking About Are You Going To Answers Question?