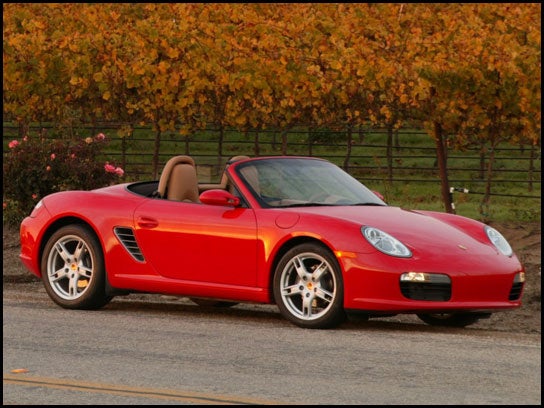 For 2007, the Porsche Boxster delivered more power and acceptable fuel efficiency - the true measure of a 21st-century sports car. Engines for both the 2007 Boxster and Boxster S mid-engined roadsters received VarioCam Plus, which continually adjusts valve timing for optimal performance.

The standard Boxster received a 2.7-liter, flat six-cylinder engine that produced 245 horsepower, while the Boxster S was powered by a 3.4-liter six-cylinder that pumped out an impressive 295 horsepower. Both engines were located behind the passenger compartment but ahead of the rear axle, hence the mid-engine designation.

In addition, the Boxster was equipped with a lightweight, sound-insulating convertible top that opened and closed in 12 seconds. It came with a heated glass rear window and could be operated while moving at speeds up to 30 miles per hour. Options included Park Assist, automatic climate control, a Bose surround sound system, a six-disc CD changer, a three-part Windstop wind deflector, and an aluminum hardtop.

Drivers and reviewers noted that the Porsche Boxster was a fun car to drive, with good balance, a well-appointed interior, and plenty of power when you needed it.

What's your take on the 2007 Porsche Boxster?

Have you driven a 2007 Porsche Boxster?
Rank This Car

when I complete my Ad I and press the button to pay "$4.95" to publish my ad the website does not take me to a screen to pay for the ad, have tried numerous time and it doesn't work

How Do You Remove Wire Harness Off An Ask Amp

How Do I Purchase A Car Through CarGurus

The car dealer I am trying to fairly buy a car from CarGurus suggested listing is is quoting KBB Certified Pre-Owned (CPO) prices. When in fact the car is being sold at “As Is - no warranty”. The ...