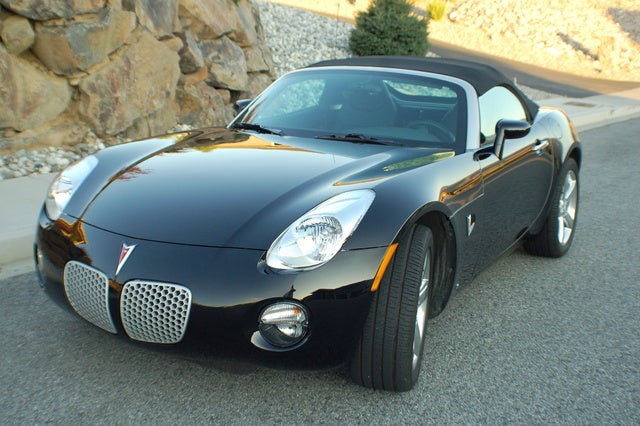 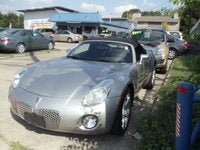 The Pontiac Solstice turned into a bigger hit than even GM expected, with demand outweighing initial production in its debut year. The 2-door classic roadster was curvy, beautiful, and dreamy, luring in wide-eyed driving enthusiasts with its affordable price tag. For 2007, the Solstice packs even more power and road-ripping fun in its compact body.
The 2007 Solstice features a 2.4-liter, DOHC Ecotec I4 engine at 177-hp. But this engine, though plenty peppy, never quite matched the hunkered-down muscular looks of this sporty roadster. So in 2007, the Solstice gets a new trim and engine. The rocket-like GXP features a 2.0-liter DOHC Turbo Ecotec rated at a whopping 260-hp. Both engines come with a 5-speed manual transmission (automatic optional). The GXP also comes standard with ABS brakes, a sports suspension, traction control, dual exhaust, and limited slip differential, which are only optional on the base convertible. Power windows and locks and cruise control are also standard on the GXP. Air conditioning and leather seats are still an option on both models. A new option for 2007 is a rear spoiler.
The 2007 Pontiac Solstice is a hybrid of sorts. Not in the environmentally friendly engine way, but in its various components. To keep the price tag down, GM copped parts from all of its other cars to use in the roadster, from fog lights to the transmission to the steering wheel.
Looks are everything with 2007 Solstice owners, and this convertible is dripping with style. But functionally, drivers find the seats comfortable, the ride smooth, handling stable, and cornering precise. Negative comments focus on an awkward transmission, the annoyance of having to get out to remove or put up the soft top, and limited headroom with the top on. The lack of both trunk space and storage compartments is by far the biggest complaint.

What's your take on the 2007 Pontiac Solstice?

Have you driven a 2007 Pontiac Solstice?
Rank This Car

HOW DO I SELL A CAR FOR A FRIEND

MY ELDERLY FRIEND HAS HAD A STROKE AND I AM LISTING AND SELLING HIS CAR FOR HIM. HIS NAME AND HIS WIFE'S NAME IS ON THE TITLE, BUT I AM THE GURU ACCOUNT HOLDER? PLEASE ADVISE.

Ad Cancelling How Do I Do This

How do I cancel my ad as car has sold?

How To Fix Turn Signal Cable On 2007 Pontiac Solstice

How to fix turn signal cable on 2007 pontiac solstice

How Long Must I Wait For Seller To Complete Purchase?

I accepted an offer, but they have not completed the sale. How long must I wait ? Can other people make offers and purchase?

Are you affiliated with GEG Automotive? I have contacted them about a Pontiac Solstice thinking it was a car you were advertising, but I now believe it was a competitor of yours. I would prefer deal...