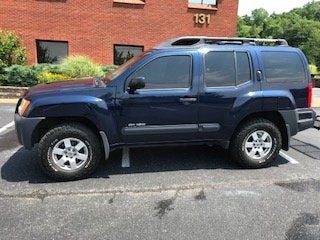 Fresh off a 2005 redesign and a 2006 award for SUV of the Year, the 2007 Nissan Xterra makes few changes to its small SUV. Though sharing a platform with the larger Pathfinder, the 2007 Xterra is smaller (it seats 5 to the Pathfinder's 7) and is clearly aimed less at the family crowd than at a younger, more adventurous driver. The X, S, and SE trims all feature either two-wheel or 4-wheel drive, while the outdoors-oriented Off-Road comes only with 4-wheel drive. All are powered by a 4.0-liter, 265-hp V6 engine with a 5-speed auto or 6-speed manual transmission.
The base X model has few trimmings, beyond getting you where you need to go, but standard features add up as you go up the line, such as power features, ABS, traction control, keyless entry, 60/40 split fold rear seats, and front and side airbags. New in 2007, the roof rack and gearbox are standard. An MP3 player comes with SE and Off-Road models. An optional fold-down front passenger seat is great for oversized cargo.

Great handling, superior off-road capability, and a healthy dose of engine power are all pluses of the 2007 Xterra, according to owners. The price is still affordable, and the smaller SUV size makes it sporty and fun to drive. There is plenty of cargo room and storage configuration options. Two major complaints were the poor fuel economy and a tendency for the inside materials to get scratched up quickly.

Users ranked 2007 Nissan Xterra against other cars which they drove/owned. Each ranking was based on 9 categories. Here is the summary of top rankings.

Have you driven a 2007 Nissan Xterra?
Rank This Car

when I try to start the engine nothing happens thr starter doesn't engage there is no clicking sound, and the volt meter doesn't move from 12 volts

REPLACED TRANSMISSION AND RADIATOR IN 2007 XTERRA. BEFORE REPLACING THE TRANS, THE TRUCK WOULD START. SINCE THE TRANSMISSION HAS BEEN REPLACED (USED), IT WILL NOT START AND THINGS LIKE THE WIPERS D...

Can Anyone Tell Me The Name Of Is Part?

Where Is Transmission Sensor On 2007 Nissan Xterra

where is transmission sensor on 2007 xterra