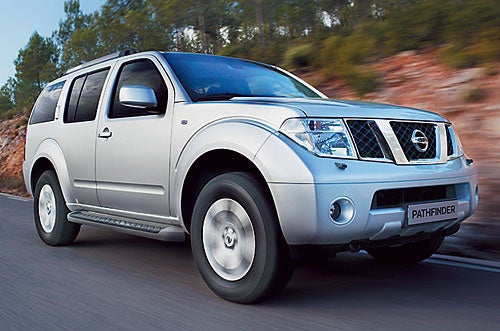 Recently updated in 2005, there are few changes to the 2007 Nissan pathfinder, a mid-sized SUV that fits seven in three rows of seats. New for 2007 was an MP3 jack and an auto up/down feature for the passenger window.

Coming in S, SE, and LE, the 2007 Pathfinder can be had with either rear-wheel or four-wheel drive. In LE, the four-wheel drive can be used on dry pavement as well. An SE Off-Road package, which only comes with four-wheel drive, adds special tires, extra anti-skid plates, and stronger shocks. All models are powered by a 4.0-liter, 266-hp V6 and 5-speed automatic transmission. Standard features include ABS brakes, traction control, stability, power seats, and dual front airbags. Side curtain airbags for all three rows are standard on the LE, optional on all other trims. Being the more upscale of the Pathfinders, the LE also comes with leather seats and a sunroof and optional navigation system.

The second and third row of seats all fold flat into the floor, expanding on the already large cargo space. Special tie-downs and storage beneath the floor provide extra configuration options for whatever you're hauling. The 2007 Pathfinder is billed as having a towing capacity of 6000 pounds. Drivers definitely like the hefty engine, which performs well and seems to accelerate pretty rapidly on the highway. Legroom and storage space are optimal, and all the standard features are a big highlight. The biggest complaint about the 2007 Pathfinder is the poor fuel economy, but no one ever saved money at the pump driving an SUV.

What's your take on the 2007 Nissan Pathfinder?

Users ranked 2007 Nissan Pathfinder against other cars which they drove/owned. Each ranking was based on 9 categories. Here is the summary of top rankings.

Have you driven a 2007 Nissan Pathfinder?
Rank This Car

Coolant Pouring From Exhaust Why ?

Blows white smoke while running and leaks out muffler steadily, when refilling rad when vehicle off it pours straight out muffler

Only makes noise when first turning it on or when i accelerate?

The car works wells on Drive but doesn't not move at all when it's on reverse transmission as if it has not entered the gear....what maybe the problem?do I have to change the gear box?

Just got new head gaskets,radiator, thermostat,waterpump and my 2007 pathfinder still overheats. Spent over $3000 and it's still overheating. Mechanic has no idea why. Please help!