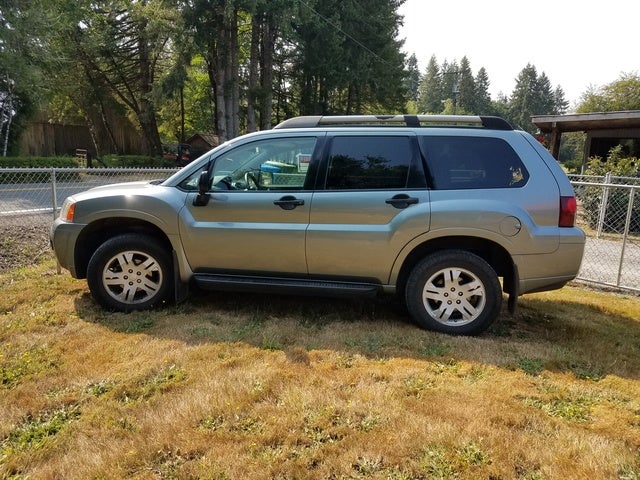 The Endeavor is the more SUV-like utility offering from Mitsubishi. It looks more substantial than its little sibling, the Outlander, but it's bigger only by a few inches. Nevertheless, the Endeavor lacks the Outlander's option of a third-row seat and doesn't match its fuel-efficiency numbers. For those reasons, the Endeavor may not survive up against its own smaller sibling.
But it's around for now, giving Mitsubishi buyers another non-car offering. The mid-sized SUV's unibody construction and four-wheel independent suspension give it a smooth, carlike ride, while its ride-height, ground clearance (8.3 inches), and interior space are akin to an SUV's.
The 2007 Endeavor is made in two trims, the LS and the SE, which was previously called the Limited. Each trim comes in either two-wheel or all-wheel (50/50 axle split) drive. The powerplant is a 225-horsepower, 3.8-liter V6 that puts out 255 lb.-ft. of torque. It's not what you'd call a workhorse, but it can pull 3500 pounds when properly equipped.
The sole transmission is a 4-speed automatic with Mitsubishi's Sportronic feature The adaptive shift technology "learns" your driving style and shifts accordingly; it also allows for clutchless manual gear selection. The 4-speed limits fuel efficiency, as the Endeavor's best EPA rating is 19 city and 30 highway (that's for the 2WD SE).
Some other nice technological advances, besides the aforementioned Sportronic transmission, mark the Endeavor. For example, its Electronic Brakeforce Distribution handles braking differently on curves than on straightaways, enhancing control and safety.
Things that have been changed for the 2007 model year include the addition of side-curtain airbags and a tire-pressure monitoring system as standard equipment on all trims; likewise, electronic stability and skid control are standard on the AWD models. The Endeavor now sports an eye-catching chrome grille.
The exterior cladding of earlier models has been removed, and the rear-seat entertainment system is no longer offered, but a navigation system now is. The choices of interior colors have been altered (black instead of charcoal, brown instead of sand), and speaking of color inside the Endeavor, its instrument panel is decked out in ice-blue illumination that looks pretty neat in the dark of night.
The tailgate window opens, which is nice for dog owners who may need to park their pups for a bit on a warmer day. If you're carrying stuff rather than Spot, know that your cargo capacity will be 40.7 with rear seat in use, 76.4 with it split and folded down.

The Endeavor has a reputation for handling pretty well, especially on corners, but some reviewers feel that the seats could be more supportive - in other words, this is no Volvo. You'll also notice that its interior, although it's OK, is no match for that of a European vehicle. The best word on the interior is that the backseat is ample, especially for children.

What's your take on the 2007 Mitsubishi Endeavor?

Have you driven a 2007 Mitsubishi Endeavor?
Rank This Car

so the original cooler had popped and started leaking i was wondering if it was OK to replace that cooler with any cooler that fit on autozones website is that a bad idea???

What Does The Code Edc Mean

My stereo has code edc

How To Prevent Rodents From Getting Into Blower Fan And Ducts?

I have a 2007 Endeavor which must be parked outside. I've had repeated instances of large pack rats getting into the blower fan and ducts. They bring in large sticks, long branches, and evergreen ...

How To Get The Driver Side Power Window Switch Working

The power window switch on the driver door stopped working. All the other door switches work and the fuse is good.

Just Fixed All Front Suspension On My Mitsubishi Endeavor

Fixed all front suspension on Mitsubishi but it has alot of play. Moves to much to sides it's not hard it too easy.