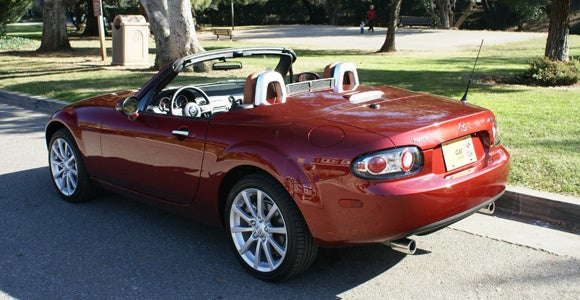 Drop-top driving gets even better in 2007, thanks to the Mazda MX-5 Miata's new power retractable hardtop, which raises and lowers at the push of a button. The lightweight, three-section hardtop folds and stows itself into the MX-5 Miata's truck in just 12 seconds. Better still, Mazda notes that the hardtop, when stowed, does not compromise trunk space. A new Z-fold soft convertible top is also available.
Now in its 16th year, the MX-5 Miata roadster continues the tradition of the two-seat roadster that originated with the classic British roadsters of the 1950s and '60s. The MX-5 Miata received a complete redesign in 2006, so other than the addition of the power hardtop, Mazda didn't make any major changes to the Miata for 2007.
The MX-5 Miata is available in SV, Sport, Touring, and Grand Touring trim packages, with the power hardtop available on the Sport, Touring, and Grand Touring packages (all three packages are also available with the soft top). Power is provided by a 166-horsepower 2.0-liter four-cylinder with variable valve timing. A five-speed manual transmission is standard on the SV and Sport packages, while the Touring and Grand Touring versions get a six-speed manual. A six-speed automatic is optional with some packages. Also available is a Sport AT six-speed shifter, which can be controlled with either the shift knob or shift panels behind the steering wheel.
Standard features for the rear-wheel-drive Miata include power windows, dual front and side airbags, power exterior mirrors, a glass rear window, anti-lock brakes, and a CD player. The Sport package adds air conditioning, while the Touring package adds power door locks, and the Grand Touring package adds leather seats, among other features.
Early reviews for the 2007 MX-5 Miata have been generally positive, with the Miata's styling, interior design, acceleration, sportiness, and responsive handling drawing positive comments. On the downside, some drivers noted that the Miata's fuel mileage is not as good as expected.

Rick Just purchased a used MX-5 Touring with the hardtop convertible retractable roof, It really is amazing in many aspects, this particular one has cloth seats, not my first choice but nice anyway. The auto stick functions very well in manual but is lacking in automatic mode. The tires on this car, with about 41,000 miles, are not the standard equipment Bridgestone and handle okay but not fantastic. Having owned many sports cars ( Crossfire Ltd. Roadster and coupe, Austin-Healy 3000 MKII ( Super car), Lancia Beta Coupe(worst ever), MGB-GT, (great car),Opal GT (amazing car). These were good and bad, the Miata has great looks, highland Green, fabric seats, handles extremely well with great road manners and feel. That being said, the Cooper tires are not for this car, harsh and unrefined, they detract for the driving experience. There seems to be an excessive amount of road feel and at speeds between 70 and 85 it tends to shudder. Transmission may be at fault. Once she is fixed and up to spec, I have high hopes for her. Right now, not so much.

Users ranked 2007 Mazda MX-5 Miata against other cars which they drove/owned. Each ranking was based on 9 categories. Here is the summary of top rankings.

Is There A Cabin Air Filter

I have a 2007 Miata MX5. There are leaves stuck the air conditioner / heating blower. Does it have a cabin air filter that I need to clean?

294 views with 3 answers (last answer about a year ago)

Can I Install Electric Retractable Roof To My Miata

I just purchased 2007 Mazda Miata Touring model yesterday. It currently has a cloth top. I have never owned a Miata, nor a convertible, so this is my first. I am looking into hardtops and was wo...

Car without exhaust connected to muffler makes a popping noise when shifting at higher RPMs. Will this hurt the engine? Only muffler is by passed

132 views with 9 answers (last answer about a year ago)

How To Replace Cooling Fan Motor On NC Miata Mx5

When ever my air is on in my Mazda Miata I’ll hit around 2000 rpms and my car will wine. Why is this?