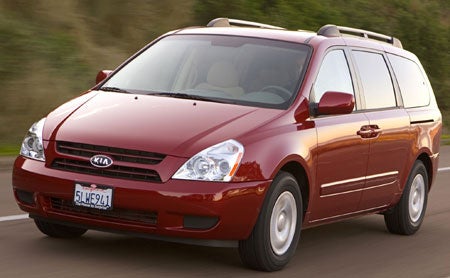 The Kia Sedona minivan entered its second generation in 2006, so there were few changes to the 2007 models. The biggest addition is a new shorter wheelbase Sedona, nearly a foot shorter than the regular Sedona. The shorter minivan comes in only one trim, as opposed to the base LX and better-endowed EX trims for the longer wheelbase.
Each 2007 Sedona comes with a 250-hp 3.8 V6 engine, representing a 6-hp boost from last year. The transmission is a 5-speed manu-matic. Inside, the interior materials were refined a bit, in an attempt to appear less plastic. Three rows of seats for seven passengers are available in the Sedona. In the longer wheelbase models, both seats fold flat, and the second row captain's chairs are removable (a bit heavy). The shorter wheelbase third row does not fold flat. The base LX is well equipped, with power features, cruise control, keyless entry, and tri-zone air conditioning. The EX adds performance tires, a roof rack, power seats, heated mirrors, and auto-dimming. DVD, leather seats, a power sliding door and tailgate and sunroof are all optional.
The 2007 Sedona does not come in an all-wheel drive version. But where it shines above competitors is its safety ratings. With high marks from the INsurance INstitute, the Sedona features six airbags, traction control, ABS brakes, and stability control all standard. Owners are drawn to the safety features, since minivans are geared towards families, but they also like the powerful engine, comfortable ride, and smooth handling. Cheap plastic trimmings, a lack of options such as a navigation system, and hard to remove second row seats are some downsides.

Users ranked 2007 Kia Sedona against other cars which they drove/owned. Each ranking was based on 9 categories. Here is the summary of top rankings.

Have you driven a 2007 Kia Sedona?
Rank This Car

2007 kia sedona will not start sometimes, battery and everything else is good, just sometimes it won't crack ,or nothing sometimes when I put key in door and unlock the door it works, maybe it's ...

Tune Up For Kia Sedona Cost

62 views with 5 answers (last answer about a year ago)

Is This A Battery Problem?

The ABS light along with the battery and TC were lit up. Did a voltage test and battery was only pulling 11amps, while running. It drastically dropped to 4.2 amps. I changed altenator and fuses on...