The 2007 Jeep Wrangler is all-new, but retains the same spirit and styling that buyers have come to love. 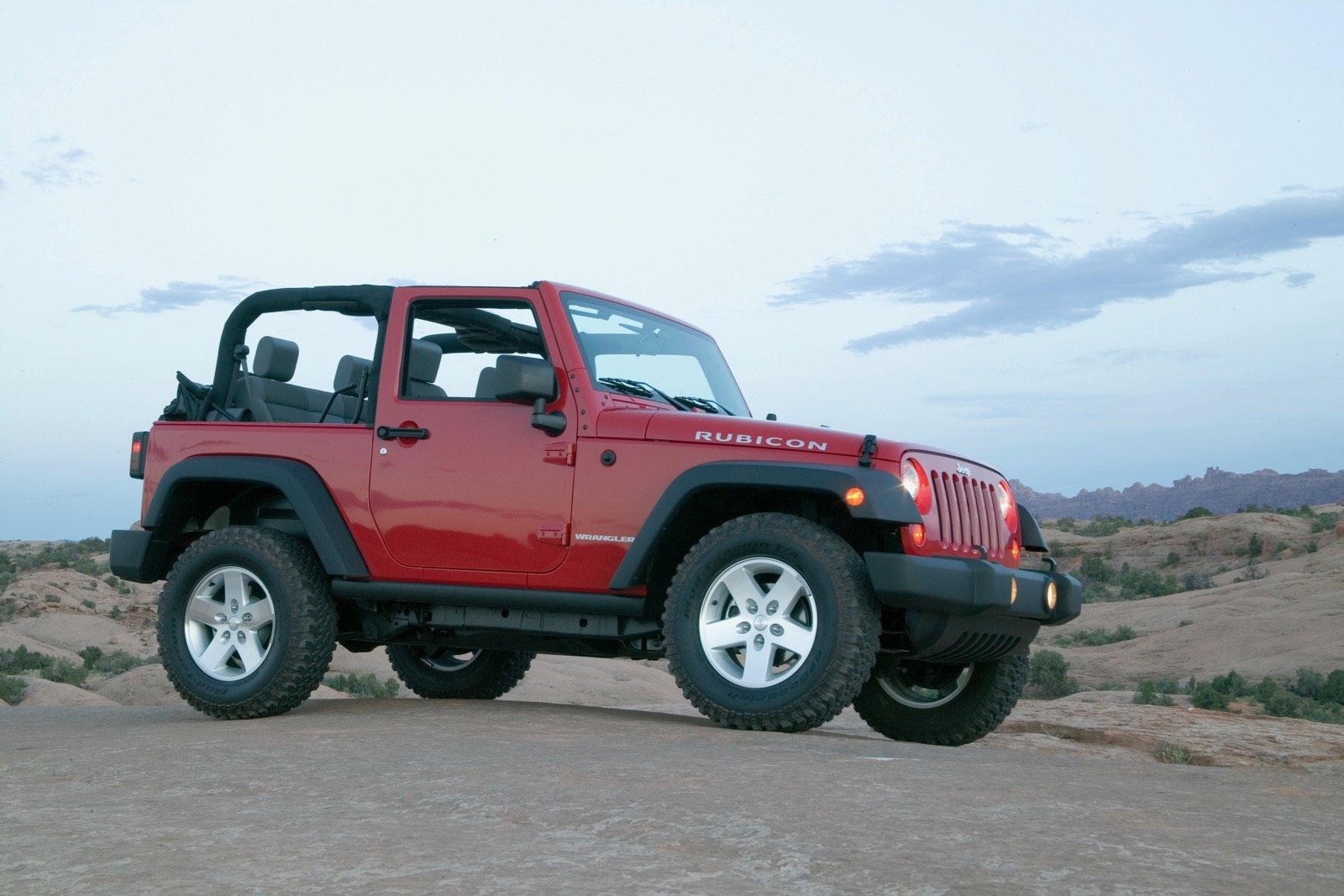 The Jeep Wrangler is all-new for the 2007 model year, but it’s still the same hardcore off-roader that has become a part of American pop culture over the decades. Even with the overhaul, the biggest news this year is the addition of a four-door model to the Wrangler lineup for the first time in the model’s storied history. A new engine joins the lineup as well, and other improvements have come in the form of new tech and updated chassis/suspension features.

The Wrangler is offered in three trim levels: Wrangler X, Sahara, and Rubicon. The four-door Unlimited configuration is offered in the same trims. A single engine powers the line: A 3.8-liter V6 that produces 198 horsepower and 232 pound-feet of torque. That’s an improvement on both power and torque from the previous generation. Rear-wheel drive and a six-speed manual are standard, but four-wheel drive and a four-speed automatic are available.

The Wrangler has no direct competitors in the automotive world, but buyers may shop it against the Toyota FJ Cruiser, Nissan Xterra, Toyota 4Runner, Hummer H3, and Nissan Pathfinder. It’s targeted at new car buyers that want a rugged, off-road-ready SUV with decent value and legendary name recognition. 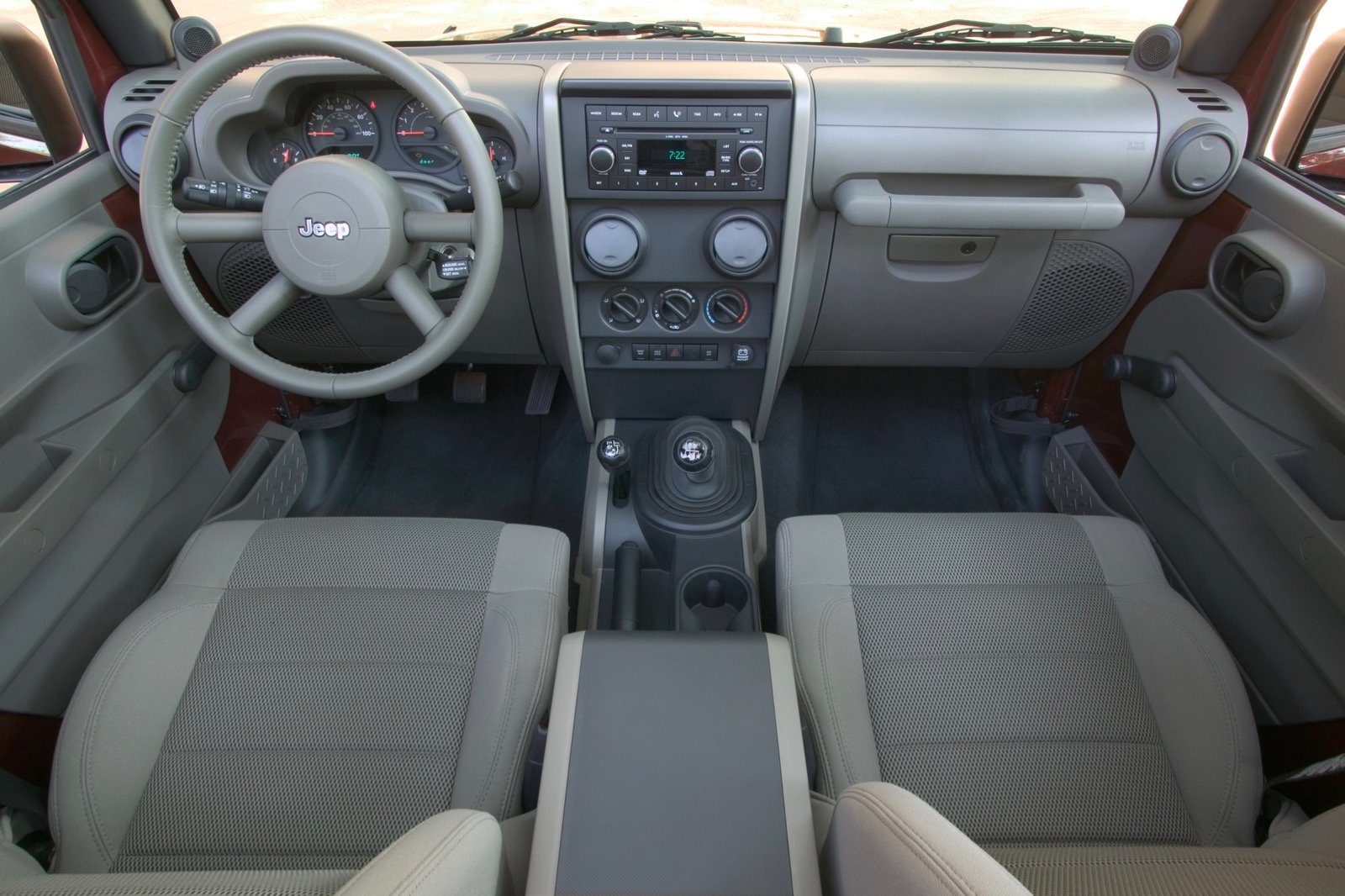 Death, taxes, and the Jeep Wrangler's styling are the only true certainties in life. The 2007 refresh has brought many improvements to the Wrangler lineup, but most of them have come under the skin. The vehicle is still instantly recognizable for what it is and still sports round headlights, the signature seven-slat grille, and a boxy shape. Even the Unlimited models just take the formula and stretch it instead of making something brand new. Some trims can be kitted out with off-roading equipment like skid plates and mudguards further bumping their rugged street cred.

The Wrangler’s cabin is more spacious and comfortable than ever before, but it’s still the same upright affair that Jeep lovers will recognize. The dash is nearly vertical, and there are very few curves to break up the hard angles of the interior. Even so, it’s a decent place to spend time, on the road or off. 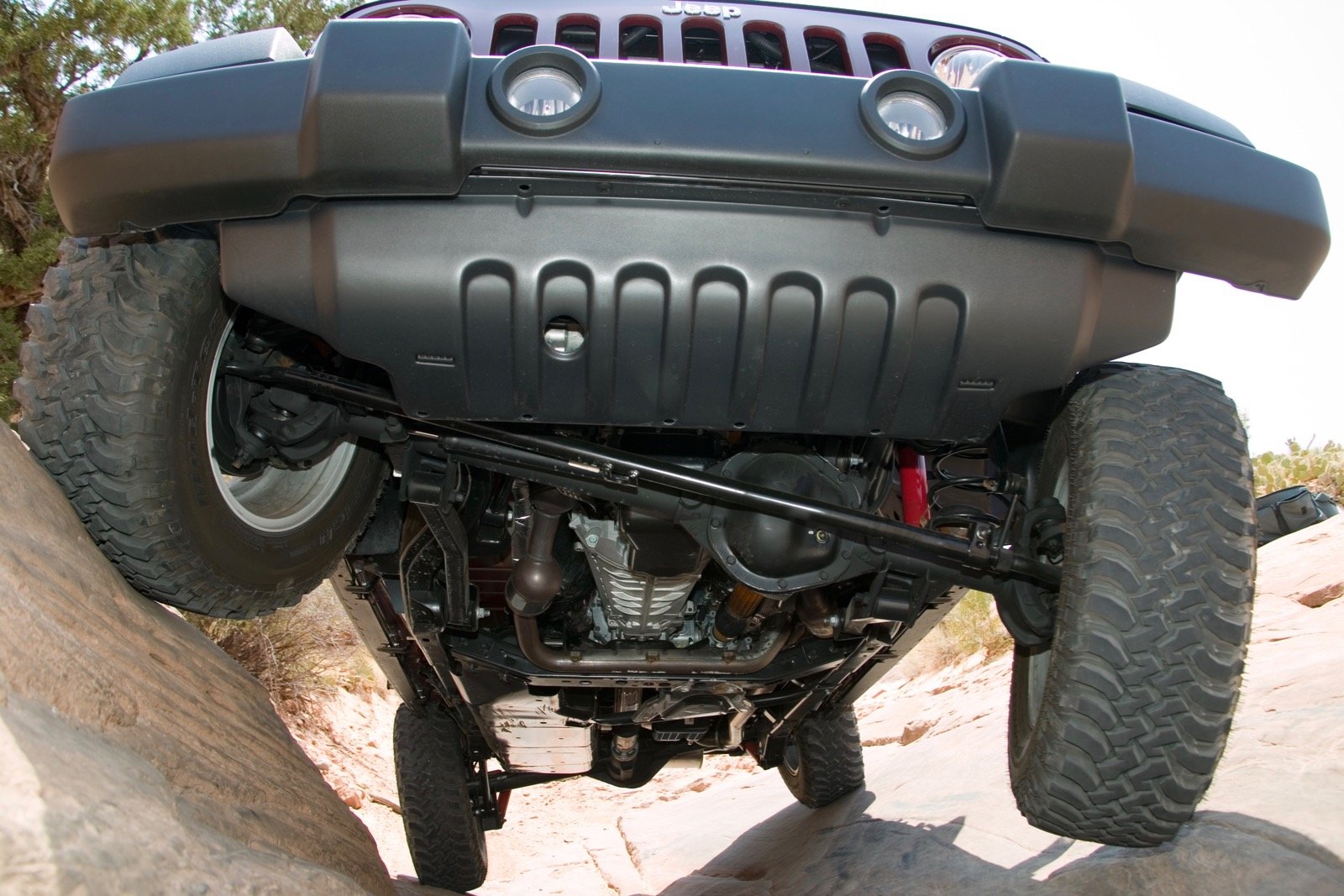 Nobody should jump behind the wheel of a Wrangler expecting to be wowed with a comfortable ride and smooth performance, but the Jeep is more refined now than ever before. Its ride is busy and requires constant attention on the road. At highway speeds, the Wrangler is calmer and more composed than in years past, but it still has trouble when there’s broken pavement or bumpy surfaces.

The new, more powerful V6 drivetrain is smooth and capable and can pull the Wrangler through some truly hairy situations. The six-speed manual gearbox may feel better suited for off-road duty to some, but the automatic gearbox is more refined than the four-speed units in many other brands. The ability to use low range, a locking differential, and a stout transfer case make the Wrangler a willing companion. The two-door body style's shorter wheelbase makes it more ideal for deep-woods crawling, but the Jeep Wrangler Rubicon is a hardcore tool for any situation—with two doors or four. 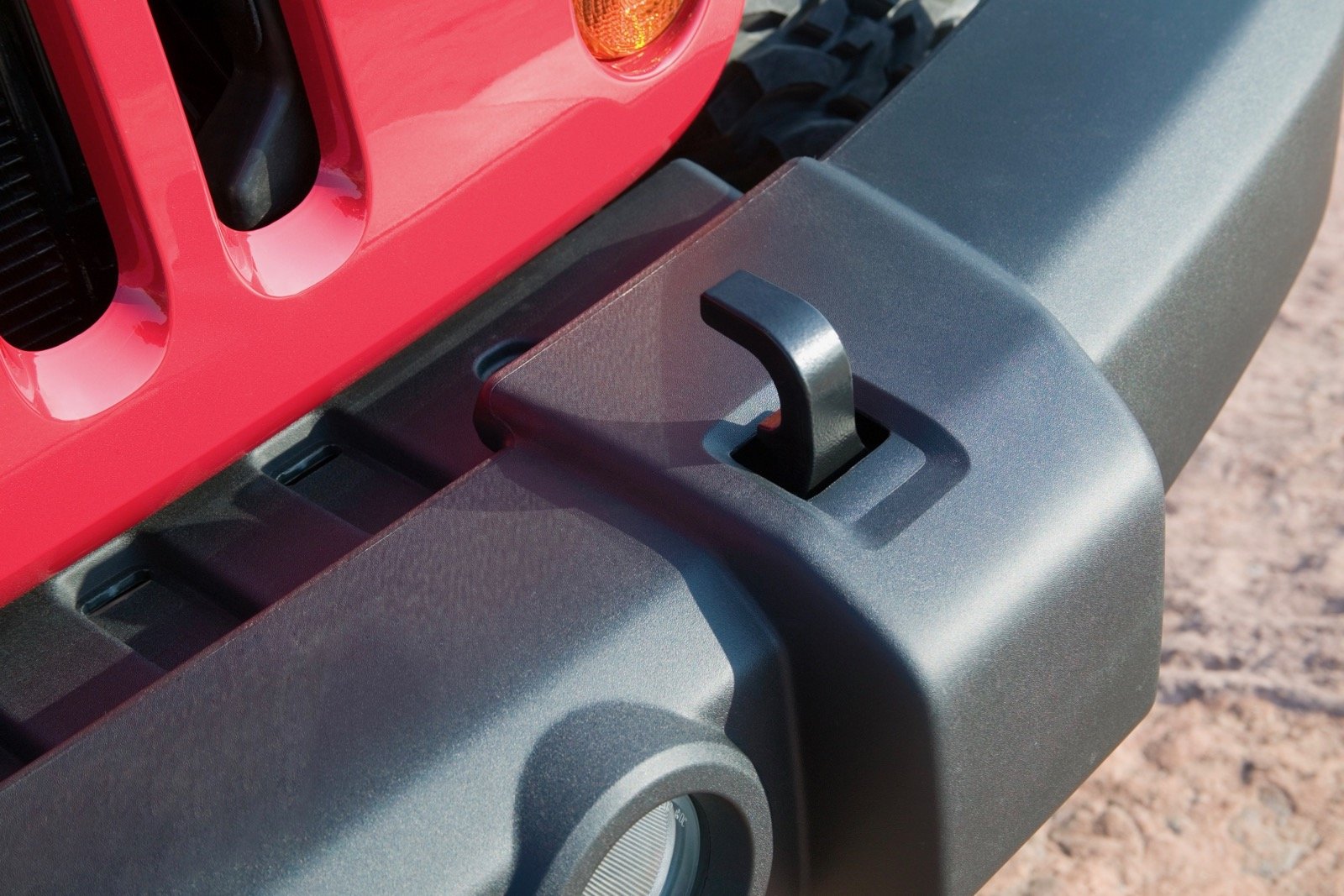 Though it’s a rough-and-tumble off-roader, the Wrangler can be a perfect daily driver for some. The new model features over five inches more front shoulder room and five inches of additional hip room in the front seats. That’s on top of a cargo area increase of two inches. The four-door Unlimited can carry up to 86 cubic feet of cargo behind its rear seats as well. The rear seats struggle a bit with legroom, regardless of how many doors there are.

The Jeep’s hearty ground clearance may make it hard for parents needing to load and unload kids. Even so, the vehicle’s available soft top or hardtop, and the ability to cruise nearly completely exposed to the outside world is a great benefit in the Wrangler’s favor. 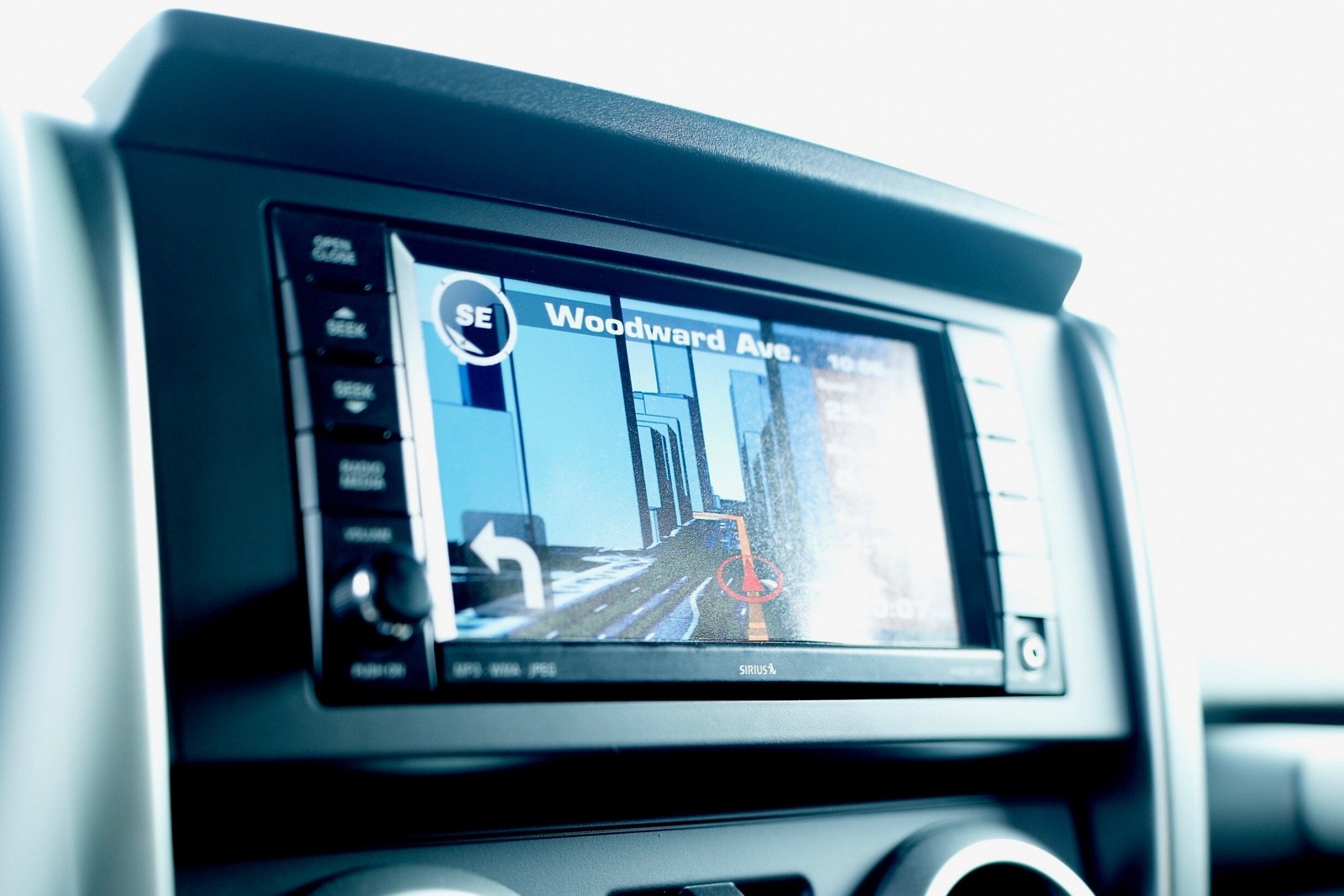 The Wrangler is basic in the tech department, but who needs features like air conditioning when you’ve got the outside world to keep you cool?

Standard features for the Wrangler X include a 12-volt power outlet, a six-speaker stereo, and an AM/FM stereo with a CD player. Available features include satellite radio, an MP3 player, an Infinity sound system with six speakers, and the Jeep/Chrysler MyGig system.

However, the base trim misses out on common comfort features like power windows and door locks, cruise control, keyless entry, and steering wheel-mounted controls. 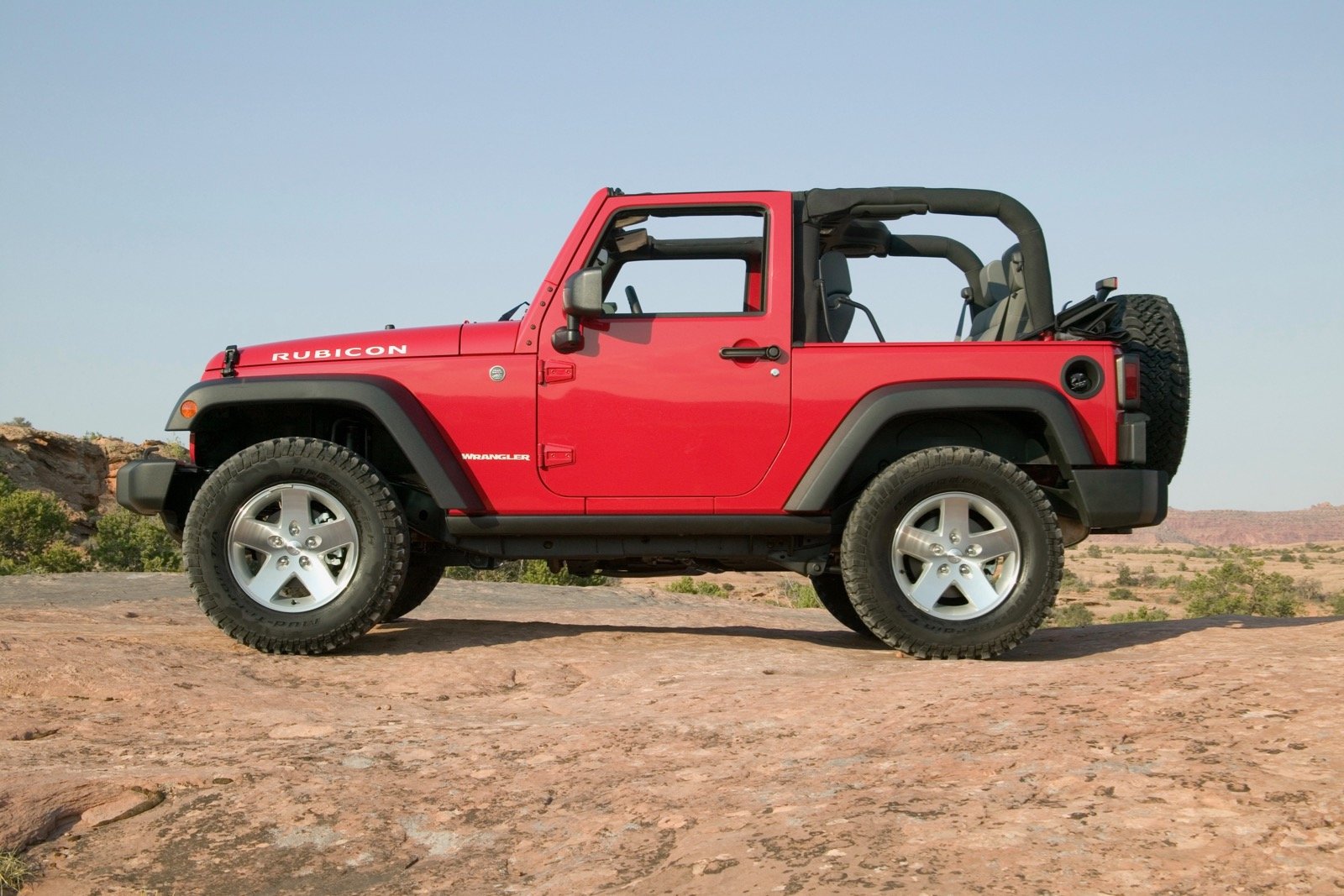 Crash test results were mixed for the Wrangler. The Insurance Institute for Highway Safety (IIHS) rated it "good" in both front crashworthiness tests, but only "marginal" for side-impact safety and for head restraints and seats. 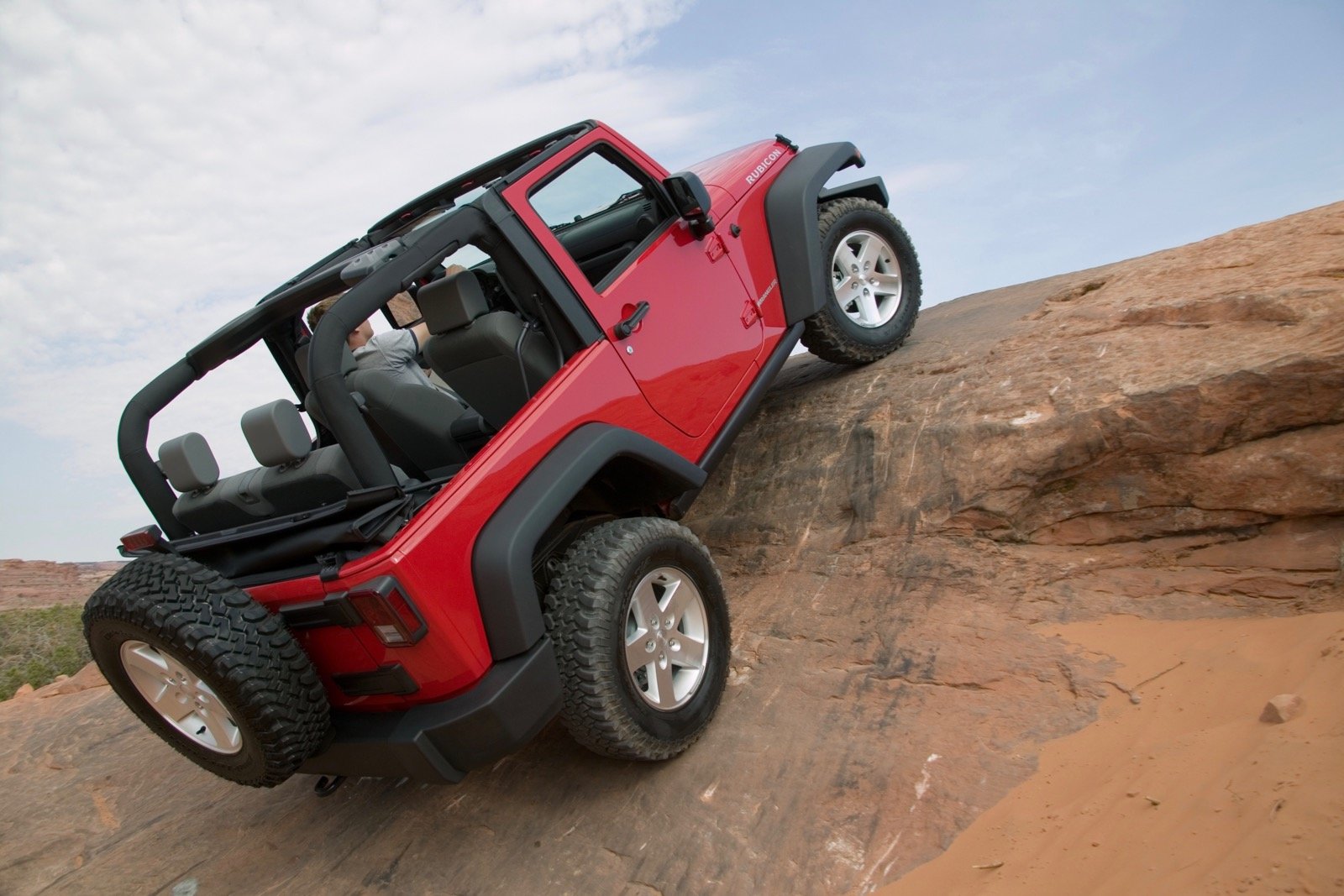 The Jeep Wrangler will sell to a select group of buyers, no matter the price, options, or safety scores.

Its starting price of $18,105 before options, destination, or taxes represents an absolute stripped-down base model with a manual transmission, but it’s a Jeep, and that’s all that many Wrangler buyers care about. Stepping all the way up to the four-door Wrangler Unlimited Rubicon model only costs $28,895, so the Jeep is a steal compared against some other off-road-ready SUVs. The Unlimited Sahara model represents a strong bargain, too, and lands with an MSRP that is a few thousand less than the Rubicon.

If we were shopping for one today, we'd opt for either the Jeep Wrangler Sahara or step up to a four-door Jeep Wrangler Unlimited in the Sahara or Rubicon trims. The extra cargo capacity of the larger model and the convenience of an automatic transmission opens up the Wrangler to be an excellent daily driver. The Jeep Wrangler X is just too basic.

Have you driven a 2007 Jeep Wrangler?
Rank This Car

Hi, i need to change my steering angle sensor for jeep jk 2007 manual transmission. Can i install one for liberty or grand cherokee version. Thank you in advance.

Headlights Come On When Jeep Is Parked And Turned Off

My 2007 jeep was parked in the backyard, no one around it, key fob hanging up in the closet and the headlights randomly came on went off and came on again. It has done this several times. What coul...

373 views with 2 answers (last answer about a year ago)

DO YOU TAKE HARLEYS FOR TRADE?

Have a 2015 Harley Dyna Street Bob with a 1690cc engine. The bike is nearly mint with only 1, 600+ miles due to I wrecked my hip's and sadly cannot ride for now. Are Harleys an item that can be use...

75 views with 3 answers (last answer about a year ago)