The 2007 Jeep Liberty is a solid off-road companion, but it’s less refined on-road than much of its competition. 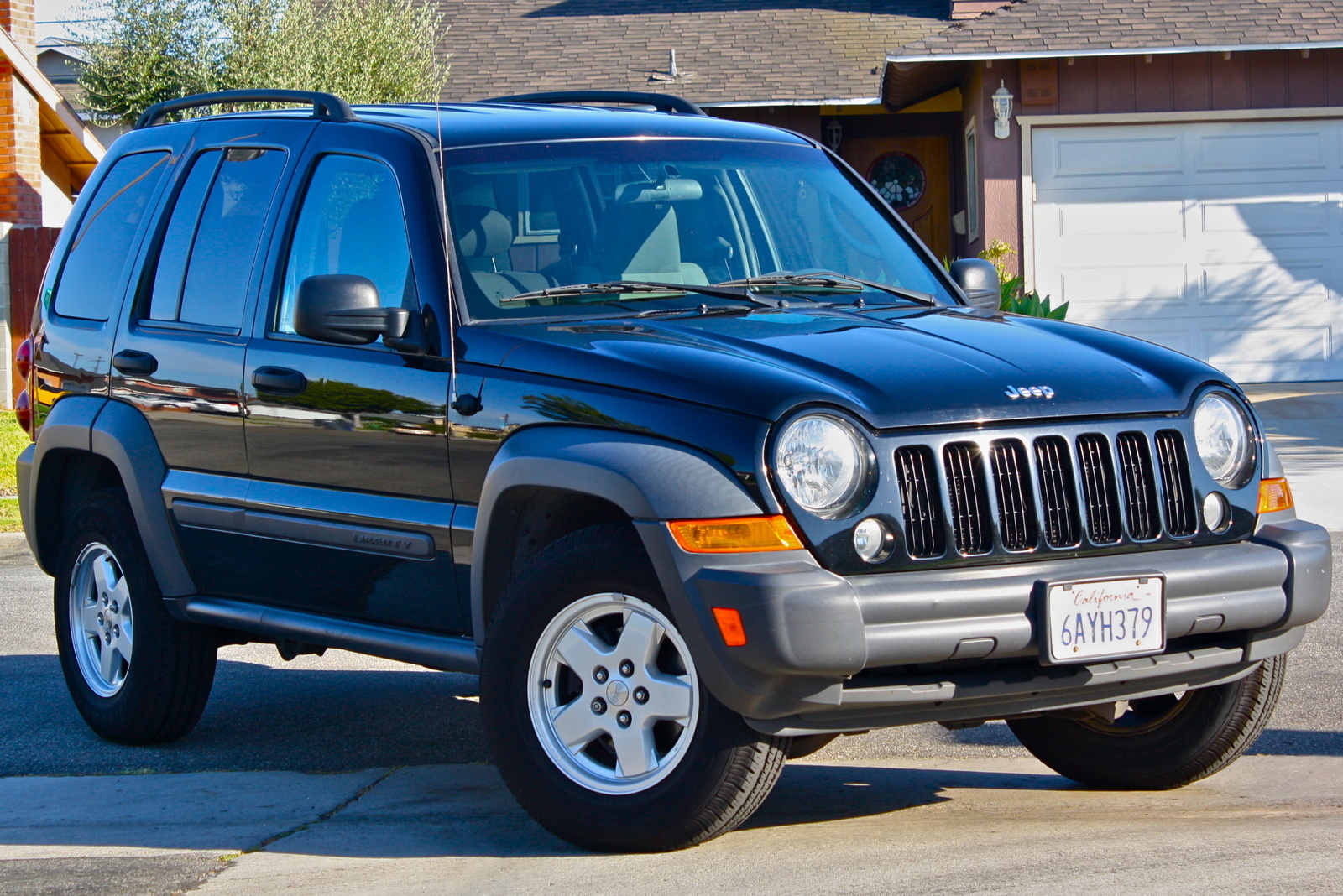 The Jeep Liberty is an off-road-ready compact SUV with the heart and soul of the brand’s much heartier vehicles. It’s able to climb, crawl, and wade through much stiffer terrain than its tiny size would suggest, and makes use of four-wheel drive and a solid rear axle to get through the tough stuff.

The Liberty is targeted at new-car buyers that want a rugged and capable SUV to take where more pedestrian vehicles just can’t go. It competes with the Toyota RAV4, Honda CR-V, and Subaru Forester. Jeep offers the Liberty in just two trim levels: Jeep Liberty Sport and Jeep Liberty Limited. Though it slots below models like the Grand Cherokee, the Liberty carries much of the same styling and off-roading attitude as those pricier models.

A single engine is available for the 2007 model year: A 3.7-liter V6 that produces 210 horsepower and 235 pound-feet of torque. Power hits the rear wheels through a six-speed manual transmission by default, but four-wheel drive and a four-speed automatic gearbox are available. 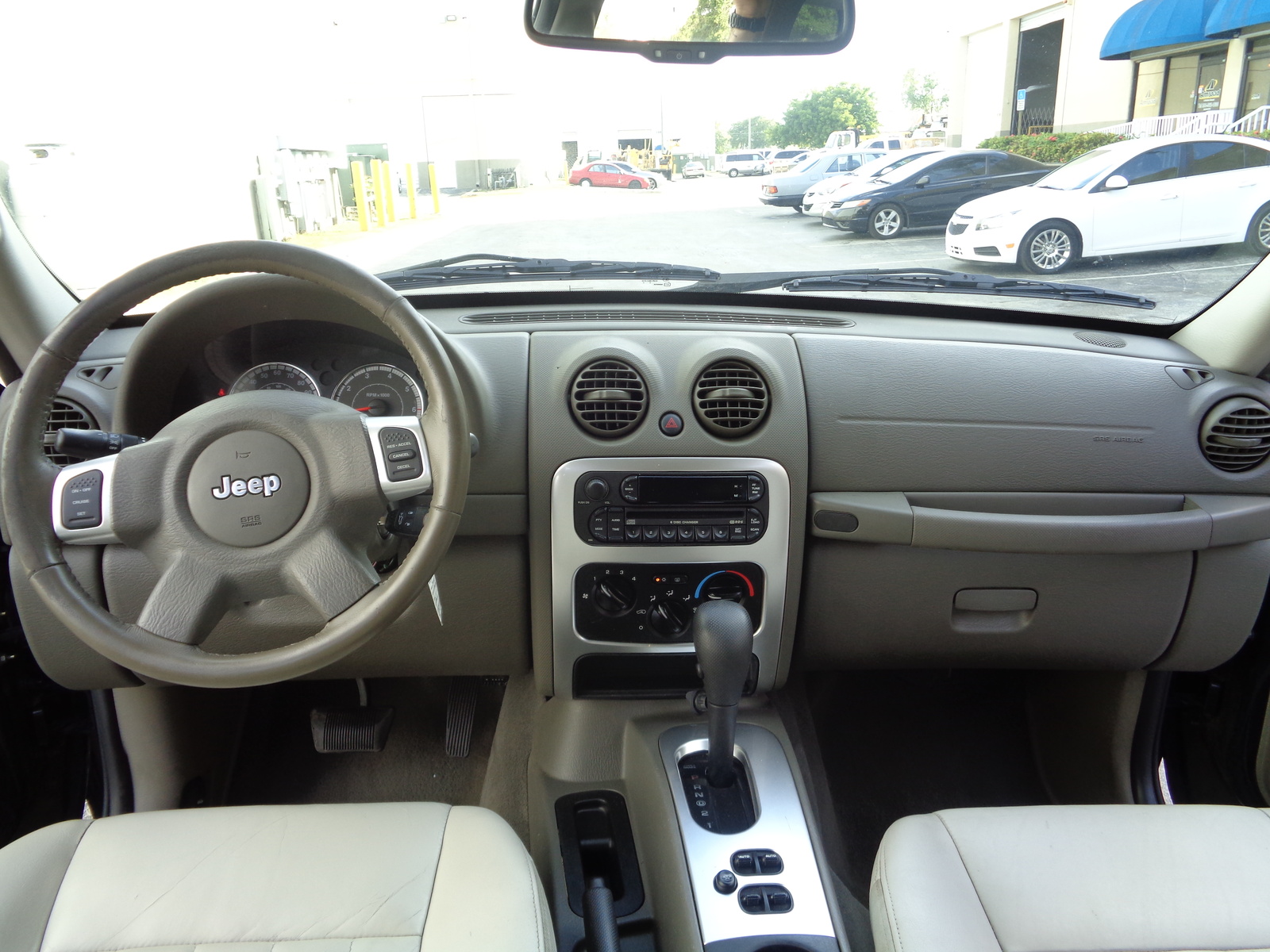 The Liberty borrows several of Jeep’s iconic styling elements and combines them in the body of a compact sport utility. The result is a rugged-looking small vehicle with decent ground clearance, miles of black-plastic body cladding, and tidy proportions. The Liberty adopted the Jeep Wrangler’s signature grille design and the Wrangler’s round headlights for a familiar but altogether new look. A side-open rear door with exterior spare tire adds to the rugged look.

The Jeep’s interior provides a generous amount of room for adult passengers, and is simply but handsomely finished with aluminum accents and attractive chromed-plastic buttons, controls, and gauges. From behind the steering wheel, outward visibility is solid in most directions, but large rear pillars make blind spots larger than they should be. Optional features like leather seats, and a power sunroof up the luxury factor considerably. 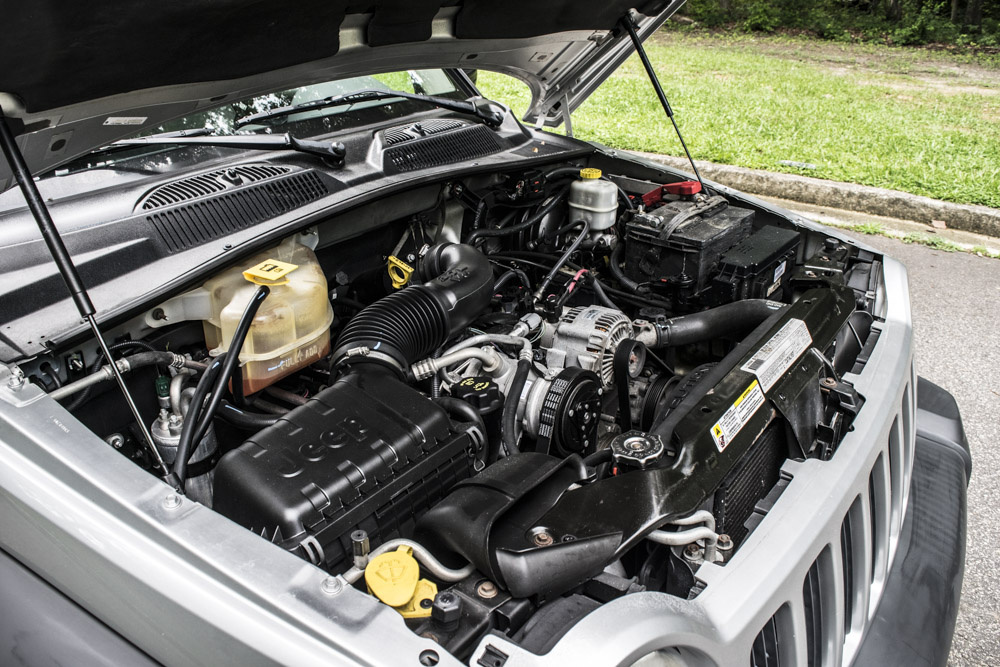 A standard V6 highlights the Liberty’s performance specs, but it’s not all good news. The powertrain is tuned more for off-road performance, which means that gearing and torque are both more effective at low speeds. Highway driving and moving around town both tax the Liberty’s engine more than they should, which leads to a roaring engine without much actual powerful delivery taking place. The now-discontinued diesel engine would have made the Liberty much more efficient and could deliver even more low-end torque for off-roading.

Handling and steering both suffer from that focus on off-road capabilities as well. Despite its tidy dimensions, the Liberty lumbers along at times, leaning and showing body roll at the faintest sign of a curve.

Towing is also a strong point for the Liberty, with up to 5,000 pounds of capability, depending on the drivetrain configuration. 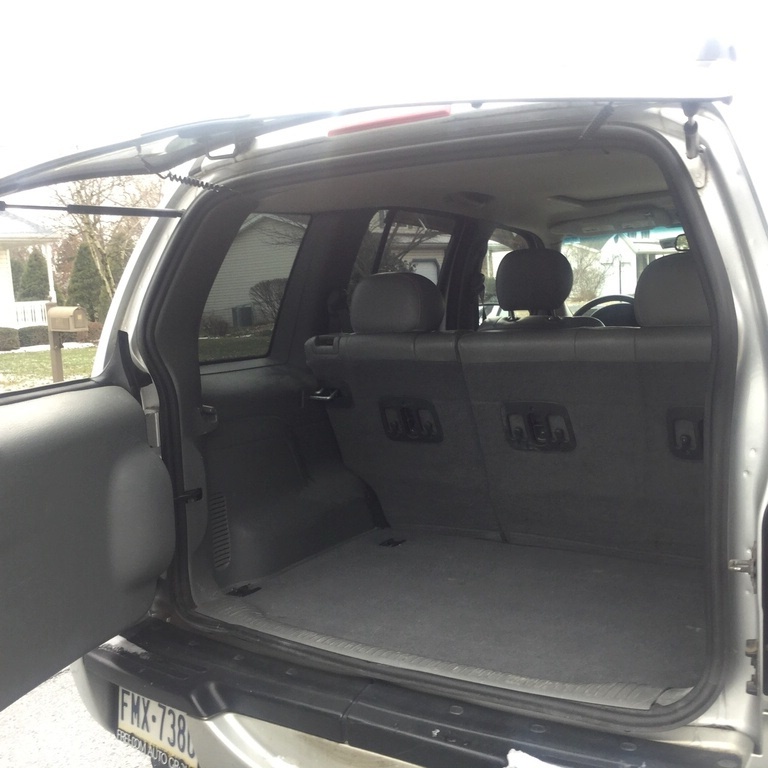 Decent interior space, a full-size spare, and a reasonably sized cargo hold make the Liberty a solid choice for the family on the go. The front seats are roomy, flat, and could use more support, but they're well padded and comfortable nonetheless. Behind the folding back seat, the Jeep can hold up 31 cubic feet of cargo, and with the rear seats folded down that number grows to 69 cubic feet of cargo space. Those aren’t gargantuan proportions by any means, but they’re nothing to sneeze at.

Beyond its off-road prowess, the Liberty excels when the weather turns bad. Its ability to keep moving when conditions change is both confidence inspiring and convenient. One big knock to the Liberty’s family-hauling abilities is its small rear doors. That makes it difficult for people with mobility issues to enter and exit the vehicle, and can make loading kids into car seats a real pain. 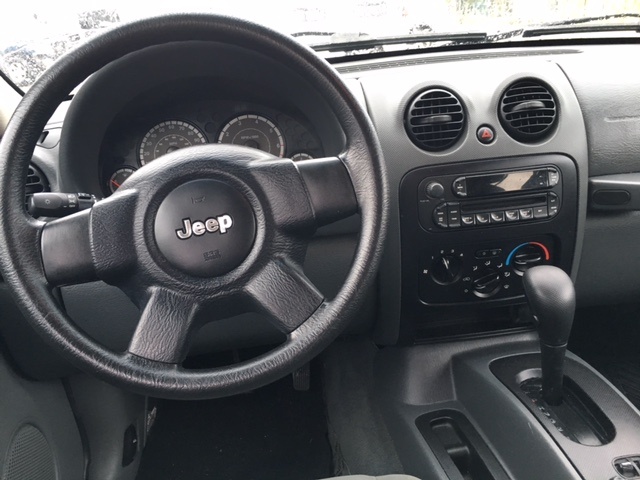 Though the offerings are basic, it all “just works.” Simplicity is key here, as the Liberty’s uncluttered dash and intuitive controls make using any of the audio and entertainment functions easy when the Jeep is in motion. The upgraded Infinity sound system sounds great and is capable of filling the little SUV with deep, rich sound. 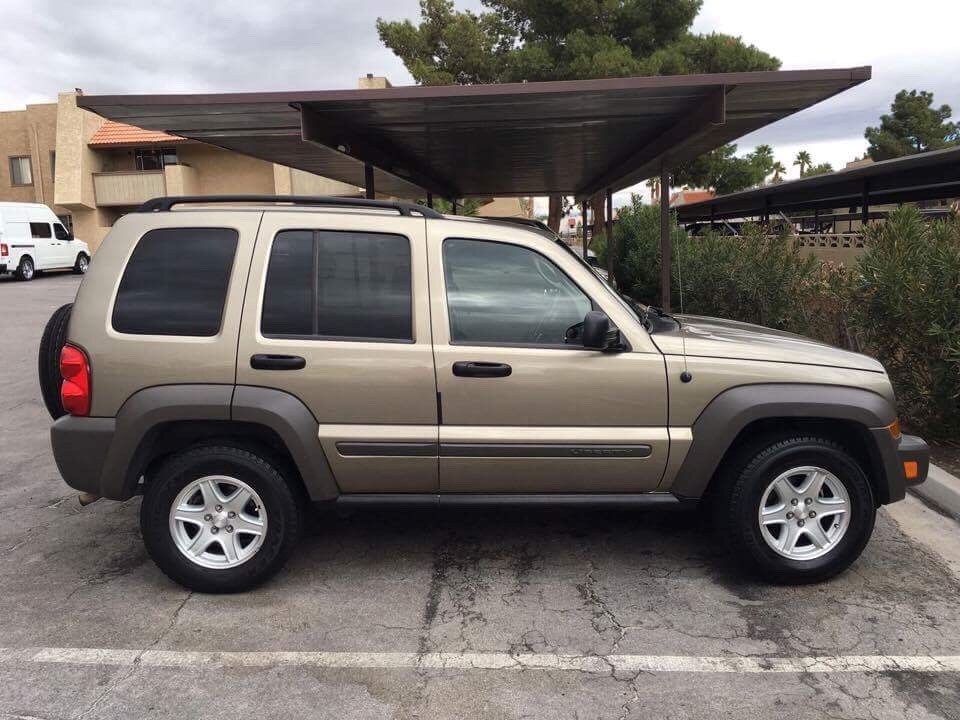 The 2007 Liberty struggled in testing performed by the Insurance Institute for Highway Safety (IIHS). It got a "marginal" rating in moderate-overlap front crash tests and "poor" ratings for its head restraints and seats. It fared a bit better in testing performed by the National Highway Traffic Safety Administration (NHTSA). There, it earned a five-star rating for front driver-side crash safety, four stars in front passenger-side crash tests, five stars in both driver-side and passenger-side rear crash protection, and three stars for rollover resistance. The lower rollover resistance rating isn’t abnormal for SUVs and pickup trucks, because a higher center of gravity makes it much easier for these vehicles to tip over. 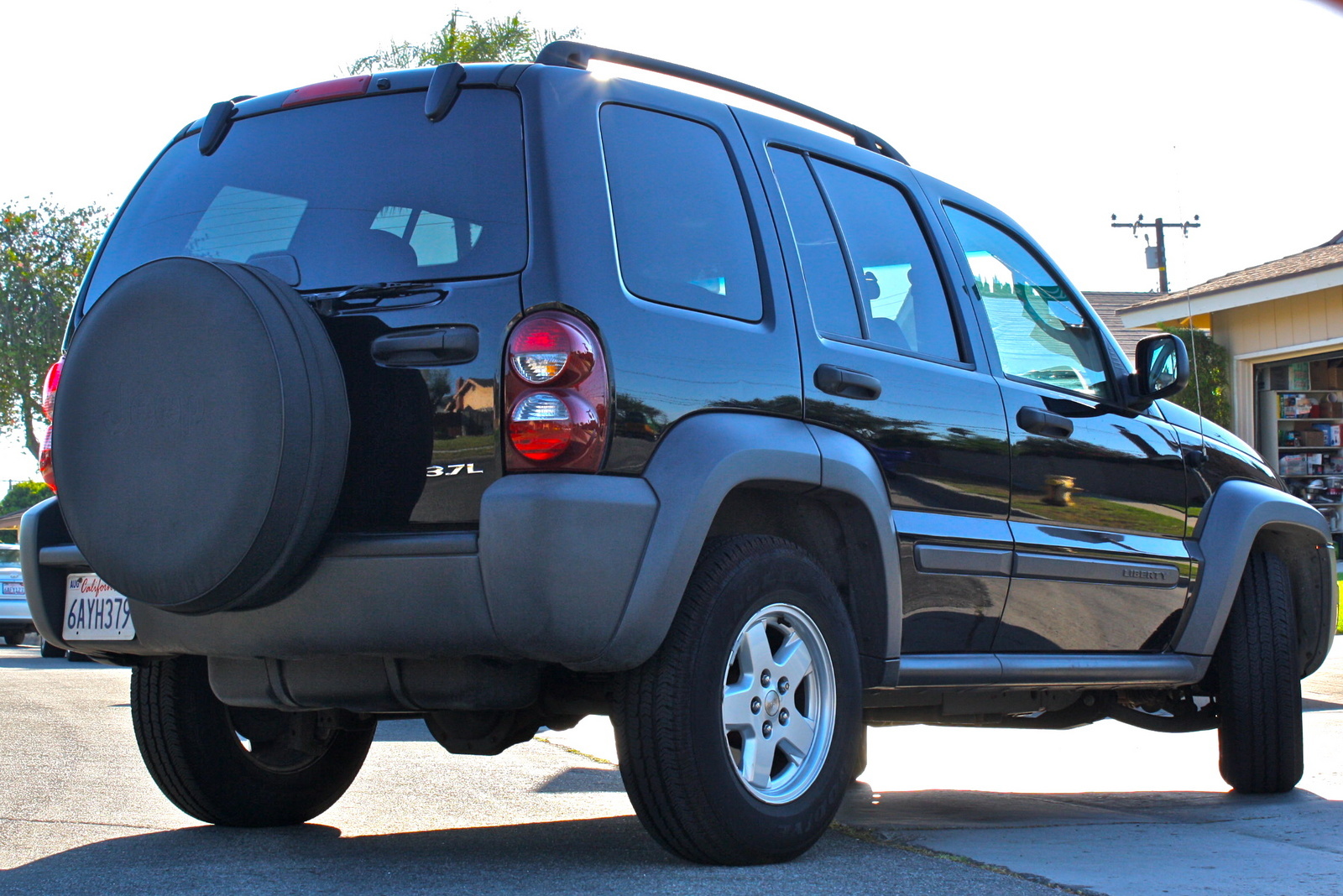 With standard rear-wheel drive, the base Sport trim level's MSRP lands at just $21,600 before options, destination, or taxes. That makes it seem like a great deal, until you consider the fact that the reasonable price tag doesn’t buy much in the way of entertainment and comfort features. Upgrading to the Limited model will cost $25,235 and moving up further to get the Limited four-wheel drive will run $26,745.

That doesn’t sound like a steep price, but consider that the Liberty’s competition is priced competitively, comes with a longer list of standard features, and many scored much better in government crash tests. The good news is that dealerships often offer strong incentives when they have the Jeep Liberty for sale.

Gas mileage isn’t a winning category for the Liberty, either. Its V6 is thirsty, which makes the Jeep’s fuel economy ratings look like those from a much larger SUV. With a manual gearbox, the Liberty returns fuel economy of 16/20/17 mpg city/hwy/combined. Models equipped with an automatic transmission can achieve fuel economy of 15/21/17 mpg with rear-wheel drive and 15/20/17 with four-wheel drive.

BurningLegend I never got to see it

Have you driven a 2007 Jeep Liberty?
Rank This Car

Any Advice On Changing Out The Camshaft Position Sensor On A 2007 Jeep Libe...

Any advice on changing out the camshaft position sensor on a 2007 jeep liberty ...code p0340... came on out of blue and began to run funny also traction control light came on at same time?? thoughts...

My 2007 Jeep Liberty has sat in my driveway for 2 yrs. i have some time to repair it. I replaced the battery and starter, those were the initial replacements. Ok, so, i put the key in and turn it t...

What Causes Shake In A 2007 Jeep Liberty

I have a 2007 Jeep Liberty, once in a while at around 60 Km/hr the shakes as if going over a washboard road for 2 sec then goes away. What would be the cause.??