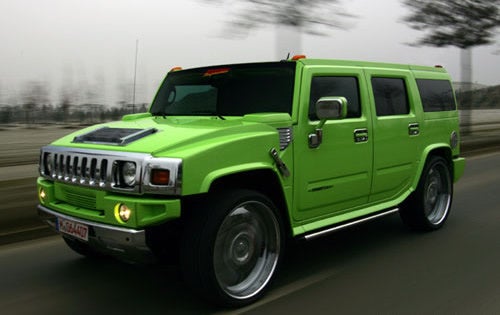 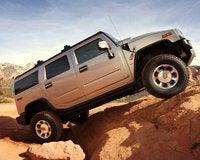 Once upon a time, the Hummer was bouncing through the desert, loaded up with military supplies and troops, mean and rugged. Enter the H2, Hummer's attempt to bring the rough and tumble beast to the suburban jungle. The 2007 Hummer H2 accomplishes this is outstanding form. First of all, Hummer kept this one simple. There's one engine, a 325hp, 6.0 liter V8. That oneÃ¢Â?Â?s good enough, why offer more and confuse designers and consumers alike? The same goes for the transmission, which is a 4 speed automatic overdrive. Simple. Uniform. Typically I'd talk about gas mileage here, but if you're thinking about getting a Hummer, are you really worried? Hummer hasn't really advertised that information, anyway.
While the power of the 2007 Hummer H2 is simple, the interior is a plethora of comforts and conveniences, designed to make sure the average consumer will like the massive SUV. Heated, leather, power seats come standard on the H2, as does air conditioning, separate climate controls, cruise control, steering mounted controls and a CD player. Options include hands free phones, wireless headphones, a DVD player, a navigation system and a sunroof. Some homes don't have that much stuff packed into them (or 87 cubic feet of cargo space). A beast outside, a palace within. Nice.
Not many owners had reviews posted, but those few that did liked the 2007 Hummer H2 as a whole. Oddly enough, all of them complained about the gas mileage. It's a Hummer... It is too wide to drive down some streets apparently, though everyone was in love with the features. Overall, this is a wonderful massive SUV, if thatÃ¢Â?Â?s what you're in the market for. If you want to save on gas money, though, I'd steer clear of this one.

GuruTXRV7 Everyone complains about the gas or gas mileage , but dont you have to put gas in all gas powered vehicles !

How To Open H2 Tailgate That Will Not Unlock???

I need to know the best way to access (open) the tailgate that is closed and will not unlock.... all other locks work so is not the fuse. Thanks Garrell Dombaugh garrell@cox.net

385 views with 3 answers (last answer about a year ago)

Hatch Door Will Not Open

all doors will open except hatch door, pull on handle and nothing happens

can i drive without replacing again