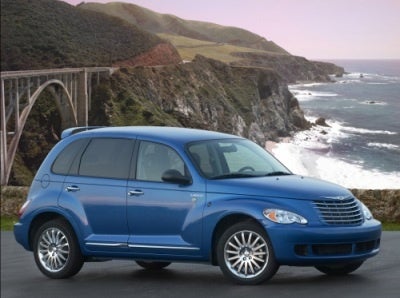 Daimler Chrysler has been one of the leaders in the automotive retro movement for years. Chrysler's concept-based PT Cruiser led the way in the early part of the decade, along with the ill-fated Plymouth Prowler. The PT Cruiser is now in its seventh year of production, with only a few notable changes for 2007. A power lift gate and keyless entry have been added as standard items on the base model.
There are seven variations of the PT available this year, thanks to four trim levels and two body styles. Chrysler's Base, GT, and Touring finishes are offered on both the convertible and wagon models. The wagon can also be had with the upscale Limited trim. The base PT wagon is equipped with power accessories, a CD audio system, and keyless entry. The convertible adds air conditioning. The Touring model adds a few additional standard features, and the GT provides more of a sporting orientation. The Limited PT includes a power driver's seat and a moon roof. A six-disc CD changer and heated seats are optional on most models.
All PT Cruisers house a 2.4 liter DOHC four cylinder engine. On the base models, the power plant stands on its own, making 150 horsepower. The Limited and Touring versions of the PT are available with an optional turbocharger, which bumps horsepower to 180. A further enhanced variation of the modest 2.4 is offered with the GT, giving the most performance-focused PT a total of 230 horsepower. Only the GT can be equipped five speed manual transmission.

Owners and reviewers strongly recommend looking into the turbo-enhanced versions of the Touring and Limited trims. The 150 horsepower base engine does not offer much driving excitement, and drivers report some frustration when passing and merging in fast-moving traffic. Reviewers also note that there is considerable variance between the trim levels, although more standard features have been added to the Base PT. Favorite features on the higher trim levels include the Boston Acoustics sound system, satellite radio, and the touring suspension. The exterior design and interior flexibility are strong selling points on all models.

What's your take on the 2007 Chrysler PT Cruiser?

Have you driven a 2007 Chrysler PT Cruiser?
Rank This Car

During the past year on at least 20 occasions the battery has been drained of power completely when i go to start it. There are no ignition lights at all. I have taken off the battery and charged it, ...

I have a 2007 PR Cruiser with 36,000 miles on it. The check engine light came on; I tightened the gas cap, and it went off. This happened more than once, replaced the gas cap, that didn't help. Now...

My 2007 PT Cruiser Won't Start You Can Turn It Sound Like It Wants To Start...