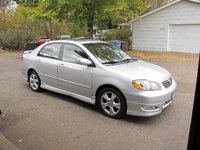 A paragon of reliability, a refuge of simplicity, and as close as it gets to an investment in a compact car, the 2006 Toyota Corolla is designed to serve, and sometimes even excite. 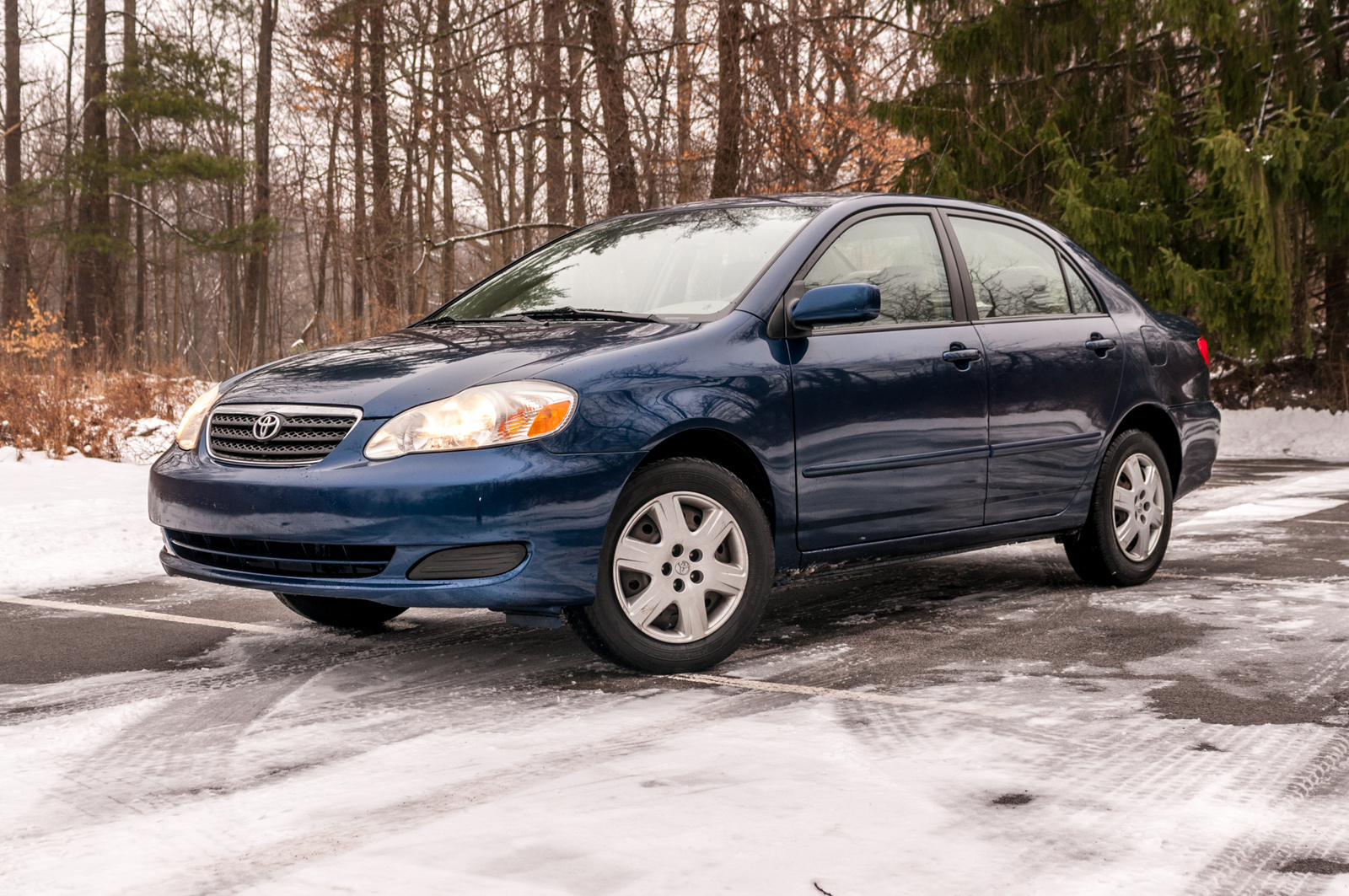 It’s been 4 years since Toyota last redesigned the venerable Corolla, a compact 4-door sedan known to be as faithfully dependable as a good dog. For 2006, Toyota doesn’t mess with success, continuing to offer the Corolla in base CE, sporty S, upscale LE, and performance-tuned XRS trim. 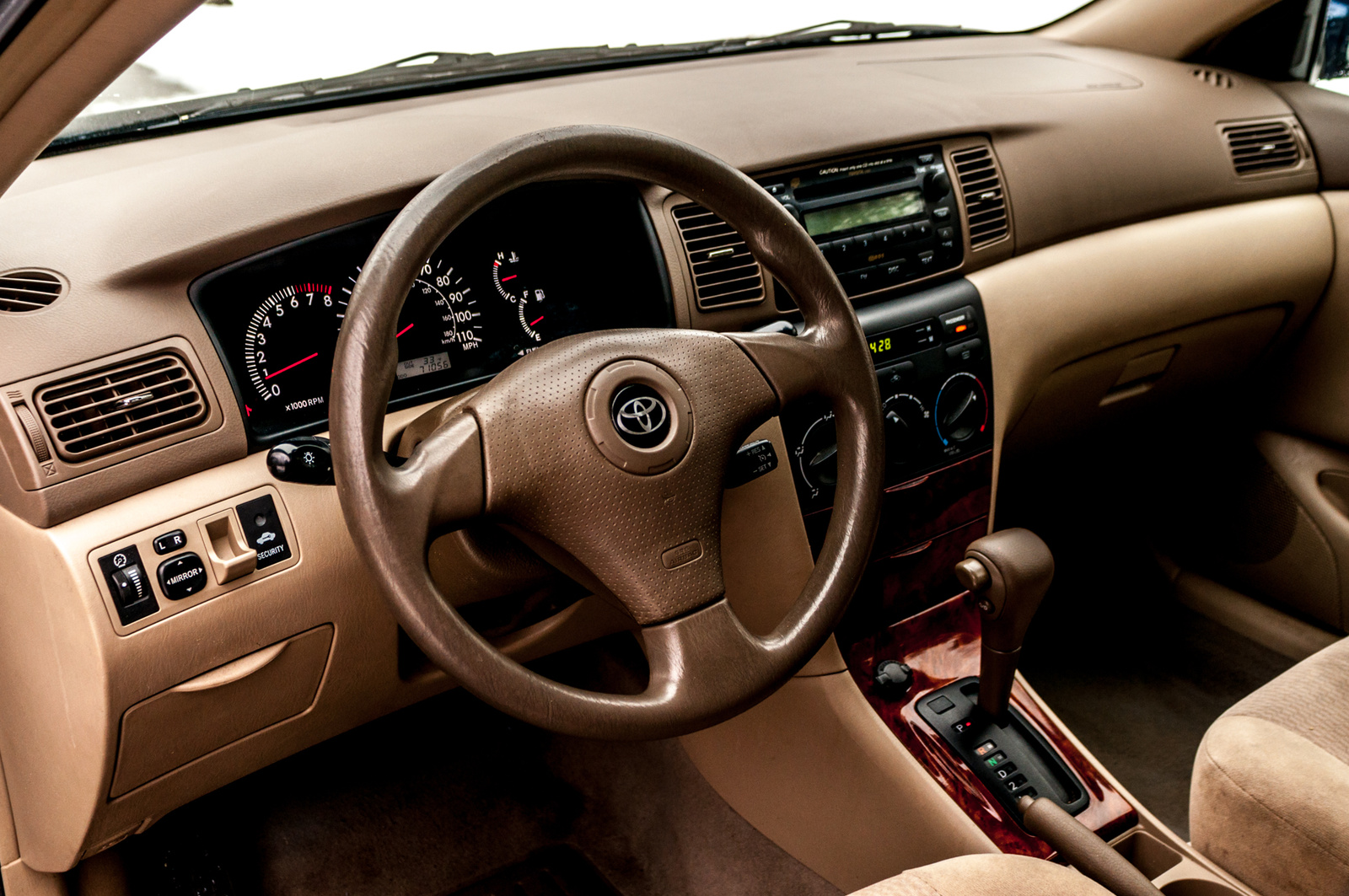 Designed for function rather than form, a 2006 Toyota Corolla isn’t going to win any beauty contests. While some design cues remind of the Lexus RX, that’s not necessarily a good thing. And the strange bed-ruffle body kit on the Corolla S and XRS is downright cartoonish.

Inside, the Lexus vibe continues, but here this is a good thing. Hard plastic abounds, but the tasteful surface tones and textures reflect quality, and in the LE trim level, wood-tone trim adds a luxurious appearance.

Controls are laid out in a traditional no-nonsense fashion. The stereo knobs can be hard to grasp while wearing gloves or with dry fingertips, but otherwise the large buttons and clearly marked switchgear are studies in proper ergonomics. Everything works with a sense of purpose and refinement, too. 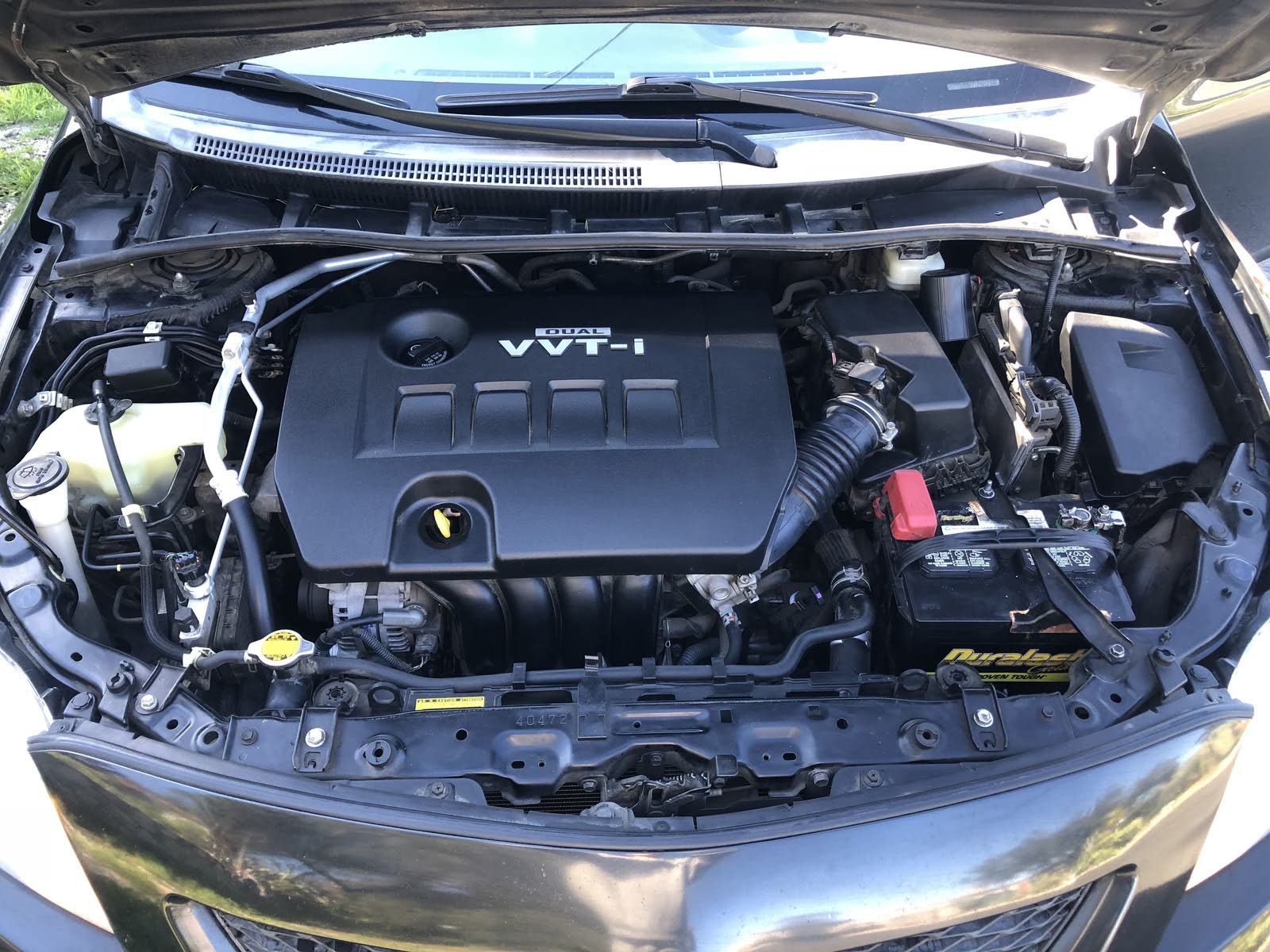 Most Corollas are equipped with a 126-horsepower, 1.8-liter 4-cylinder engine. A 5-speed manual gearbox is standard, with a 4-speed automatic as an option. This year, the engine’s power rating drops a bit due to new Society of Automotive Engineers (SAE) testing methods.

The Corolla XRS has a modified version of the 1.8-liter engine. Like the CE, LE, and S, it includes variable valve timing. Here, however, two camshaft profiles allow the engine to make 164 horsepower. In order to take advantage of this extra power, you’ll need to know how to row your own gears, because the XRS comes only with a 6-speed manual transmission. You’ll also need to rev the engine hard to reach maximum power output.

Quick but not fast, the biggest benefit of the Corolla XRS is its improved handling. With front and rear structural braces, stiffer suspension components, and 4-wheel-disc antilock brakes, a Corolla XRS zigs and zags as well as zips.

Comparatively, other Corolla models are docile, compliant, and well-behaved. You can tell the car is thoughtfully engineered and screwed together with precision, and while the driving dynamics might not excite you, knowing the car is unlikely to break anytime soon certainly will. 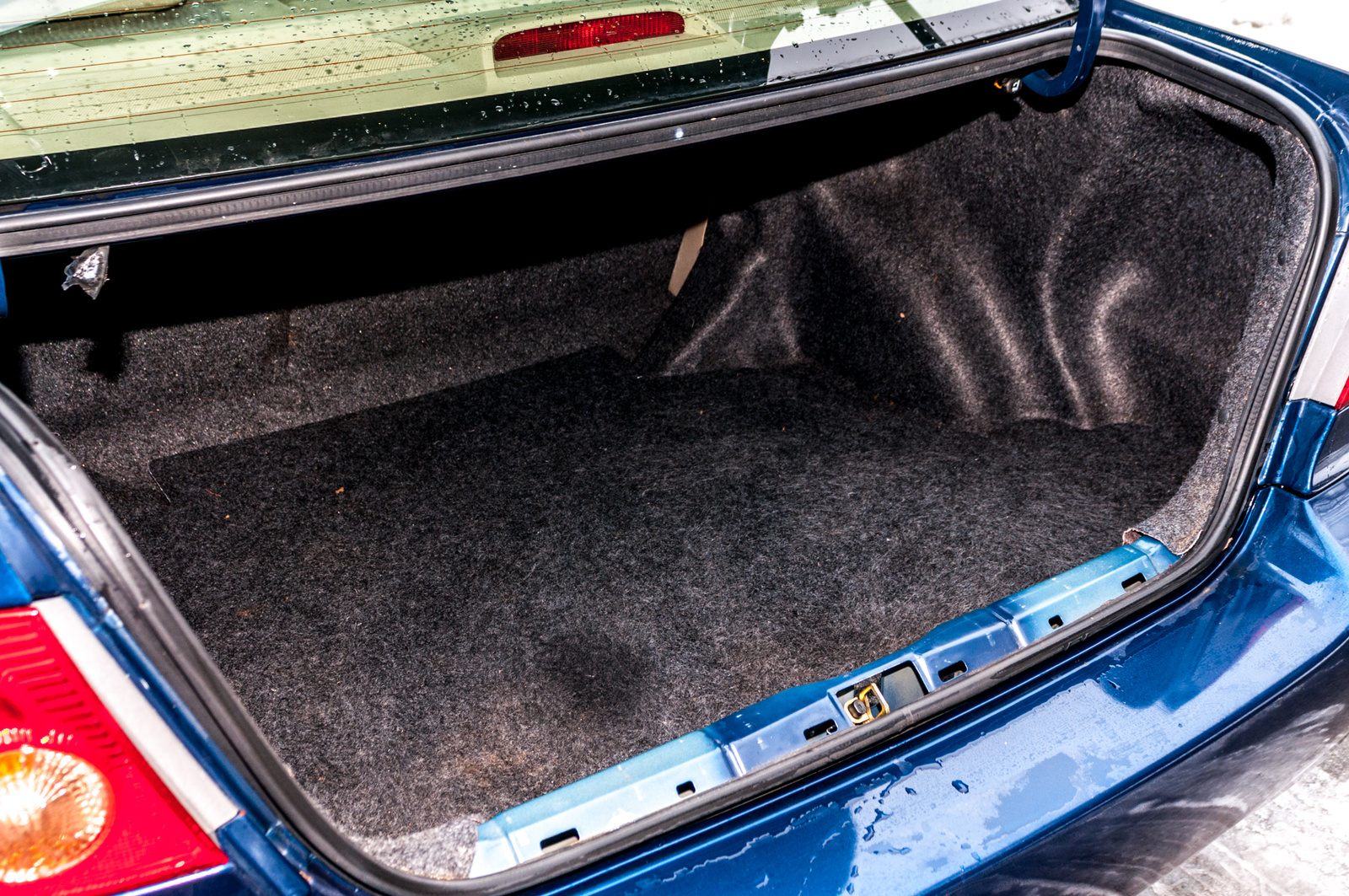 The Corolla S builds on some of LE’s standard equipment and adds an over-the-top sport appearance package, which includes a racy body kit, a rear spoiler, darkened headlights, and fog lights. But a Corolla S is all show and no go. And in standard specification, it’s missing aluminum wheels, which would go a much longer way toward improving the Corolla’s looks than all of the plastic ringing its lower perimeter.

On a positive note, the Corolla XRS backs up the racy design cues with some genuine performance. In addition to its more powerful engine, it comes with larger 16-inch aluminum wheels, sport suspension tuning, a front strut tower brace, a rear structural cross brace, and upgraded 4-wheel-disc antilock brakes. Inside, the XRS gets larger seat bolsters just in case you actually do fling the car around a corner.

Leather seats are an option, as are a JBL premium sound system and a CD changer. Cruise control, a power sunroof, and remote keyless entry also cost extra, and side-impact airbags are an upgrade you’re going to want.

Taller people will not be happy in a Corolla. The front seats' track travel is limited, and the backseat legroom isn’t terribly generous. There is plenty of storage space inside the Corolla, though, with a covered tray embedded into the dashboard, a sizable center-console bin under the armrest, good storage in the glove compartment, and narrow but long door-panel slots.

Trunk space measures a generous 13.6 cubic feet, and all but the Corolla XRS include a 60/40 split-folding rear seat that enhances utility. 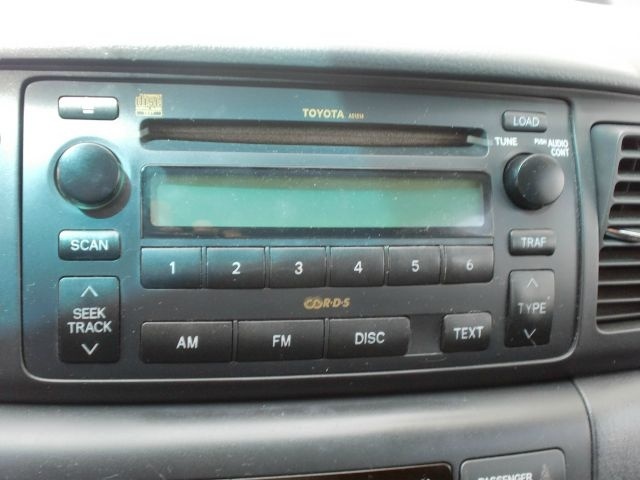 The most advanced piece of technology in a 2006 Corolla is the variable valve timing with lift engine in the XRS. Used to improve the performance of an engine, it employs two camshaft profiles. At regular engine speeds in normal driving conditions, the low-lift cam profile operates the valves in an efficient way. Rev the engine hard and the second high-lift cam profile increases power through greater valve travel.

As for what you can see and use, well, a CD player is standard. So is an outside temperature display. Toyota offers a CD changer and JBL premium sound system for the Corolla, but if you want a hands-free Bluetooth cell phone connection, you’re out of luck. 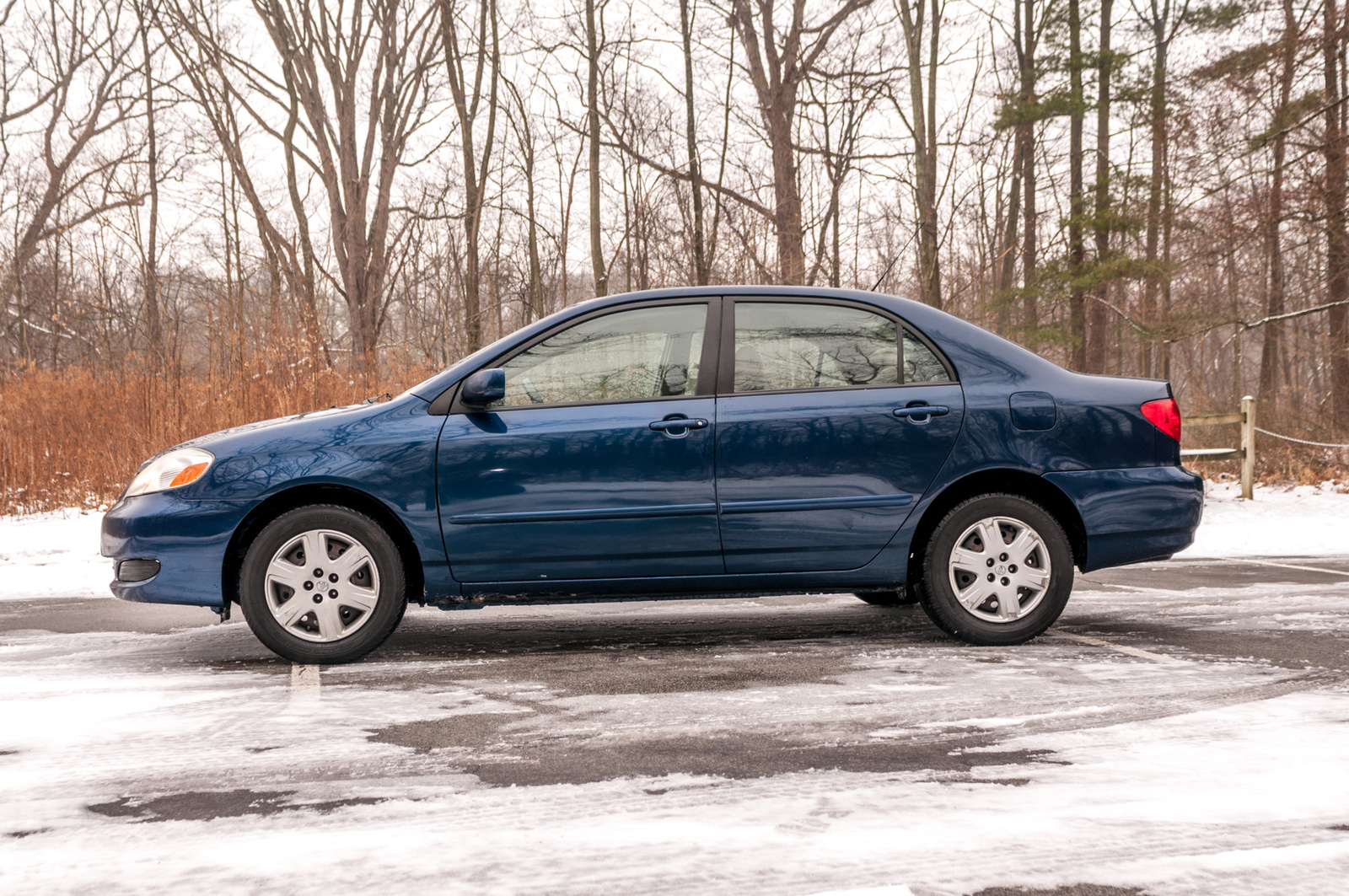 Toyota installs dual front airbags as standard equipment in the Corolla. Side-impact and side-curtain airbags are optional, and you’re going to want them because without this upgrade, crash protection is poorly rated.

In testing performed by the Insurance Institute for Highway Safety (IIHS), the 2006 Corolla gets a Good rating in the moderate-overlap frontal-impact assessment. Without the side airbags, the side-impact rating is Poor. With them, the score rises to Acceptable. Meanwhile, over at the National Highway Traffic Safety Administration (NHTSA), the Corolla’s overall crash-test rating is 5 stars.

You can better avoid a crash by getting the Corolla’s optional antilock brakes (standard with XRS trim). With ABS and the automatic transmission, stability control is also available. We highly recommend it. 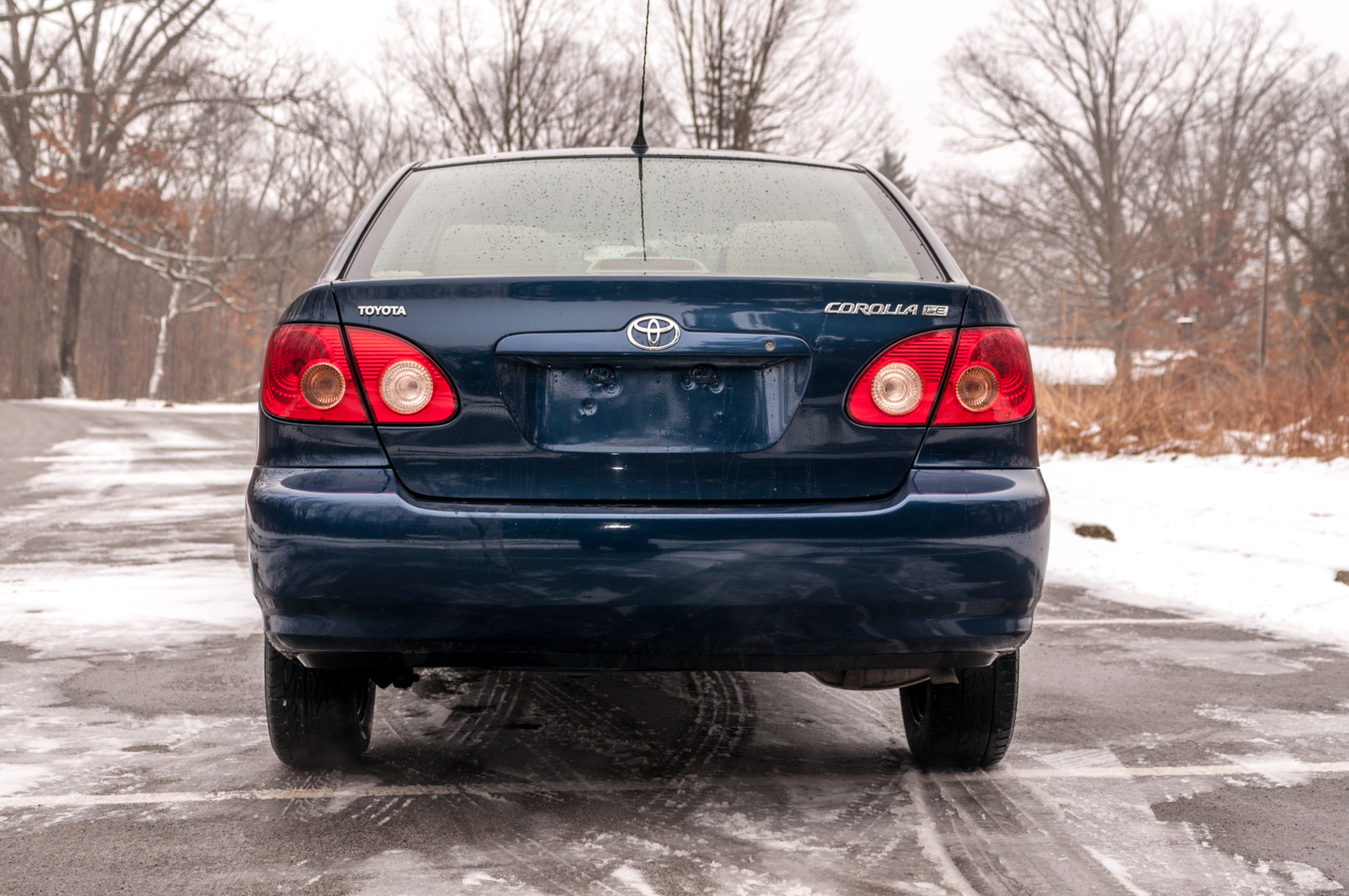 Good things are rarely cheap, and that’s true of the 2006 Toyota Corolla. With prices starting at about $14,000, and with a loaded Corolla XRS rising to around $20,000, the Corolla’s value might not be readily apparent. However, years from now, when it has saved you hundreds in repair bills and is worth thousands more than some competitors, you’ll find it to be extremely cost-effective, indeed.

What's your take on the 2006 Toyota Corolla?

Phill Great car till you start having problems.

Guru9ZBKCX Are the Toyota Corolla XRS hard to find?

Users ranked 2006 Toyota Corolla against other cars which they drove/owned. Each ranking was based on 9 categories. Here is the summary of top rankings.

Have you driven a 2006 Toyota Corolla?
Rank This Car

I closed my car listing and did not realize I would lose all the messages. I had an arrangement with a buying an now I don't have the contract information. Can someone send me the message thread fro...

i want to know which model of computer engine control i need for toyota corolla 2006 sedan 1.8 . LE.?

I took it to a shot, there is no leak, it is full of freon. They thought it was the relay switch, that was replaced. Didn't solve the problem.

After Putting A New Battery In My 2006 Toyota Corolla S, The Idle/engine Se...

Immediately after putting a new battery in my 2006 Toyota Corolla S, I notice that the car seems to vibrate. I'm guessing that the idle/engine is vibrating at too high of a speed. Should I be concerne...