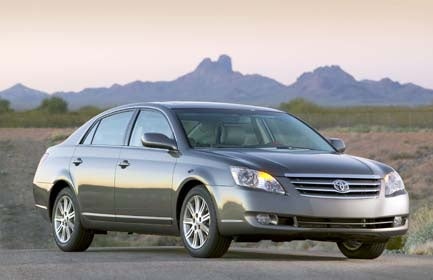 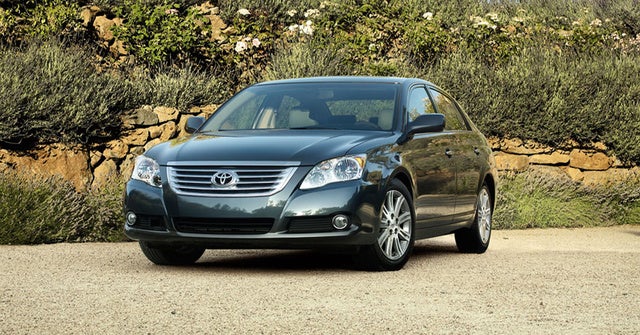 The 2006 Toyota Avalon remains unchanged from 2005, when it was redesigned with a larger frame and a more sleek and stylish exterior.
The 2006 Toyota Avalon is offered in four trims: the XL, the Touring, the XLS and the Limited. As expected with a high-end vehicle, all 2006 Toyota Avalon models come standard with state-of-the-art safety features including seat-mounted side-impact airbags, side curtain airbags and a driver's side kneebag. The Touring is the sportiest version, featuring suspension tuning, alloy wheels and a rear lip spoiler. The Limited includes all the gadgets associated with luxury brand vehicles, including a six-CD, 12-speaker sound system, separate driver and passenger-side temperature controls and the Smart Key system, which allows the driver to unlock the door and start the ignition while the electronic key remains in a pocket or handbag.
The 2006 Toyota Avalon is lauded for its roomy interior (especially the backseat) and smooth, quiet ride. The Avalon also gets surprisingly good gas mileage for a full-size sedan with a 3.5 L V6 engine, about 22/30 mpg using premium fuel.
People interested in the Toyota Avalon may also have an interest in a Nissan Maxima, a well-built car with a slightly sportier feel.

Starbee7 My 2006 Avalon has a little over 117,000 miles on it. I only began experiencing issues when my check engine light came on and found out is was an ignition coil so I got it fixed. I drove the car approximately two weeks and the check engine light came on again. So I took it to the dealer and they said I needed another ignition coil, however, this time a warranty issue needed fixing and covered the entire repair. Now, when i start the car in the morning, it is almost like it does not want to start and then it starts. It is like a dragging and then it starts. This only happens in the morning which may be the key to the problem. My battery has been checked and it is fully charged. What could be the problem?

Users ranked 2006 Toyota Avalon against other cars which they drove/owned. Each ranking was based on 9 categories. Here is the summary of top rankings.

Have you driven a 2006 Toyota Avalon?
Rank This Car

Advise On Purchasing A 2006 Toyota Avalon

i am in the works of purchasing a 2006 Toyota Avalon with 97533 miles on it. I have never purchased a used vehicle and I am doing this for my daughter to have a car for school. Her commute will be a...

Recently had to have cv boots replaced due a tear. Since then the whenever I accelerate the car has a wobble felt through floor and seats. No steering wheel shimmy or wobble. Garage that did repair ...

2006 Avalon Out Of No Where Car Starting Shaking, No Compression

Anyone Else Have This Happen?

My avalon is acting up. The ac will work and no "warning" lights will come up on the dash. Then the ac will stop blowing cold, the thermostat guage will drop below c, the brake indicator will come...

Could A P0011 Error Code Include A Broken Timing Chain?

I have a 2006 Toyota Avalon with 145,000 miles. Car shut down while driving, and we thought maybe the timing chain broke. The car won't turn over at all, but battery and electrical still work. Er...