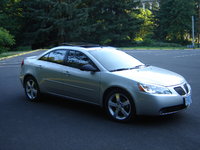 The G6 makes up for so-so cabin quality by offering performance-oriented trims and a unique power hardtop convertible. 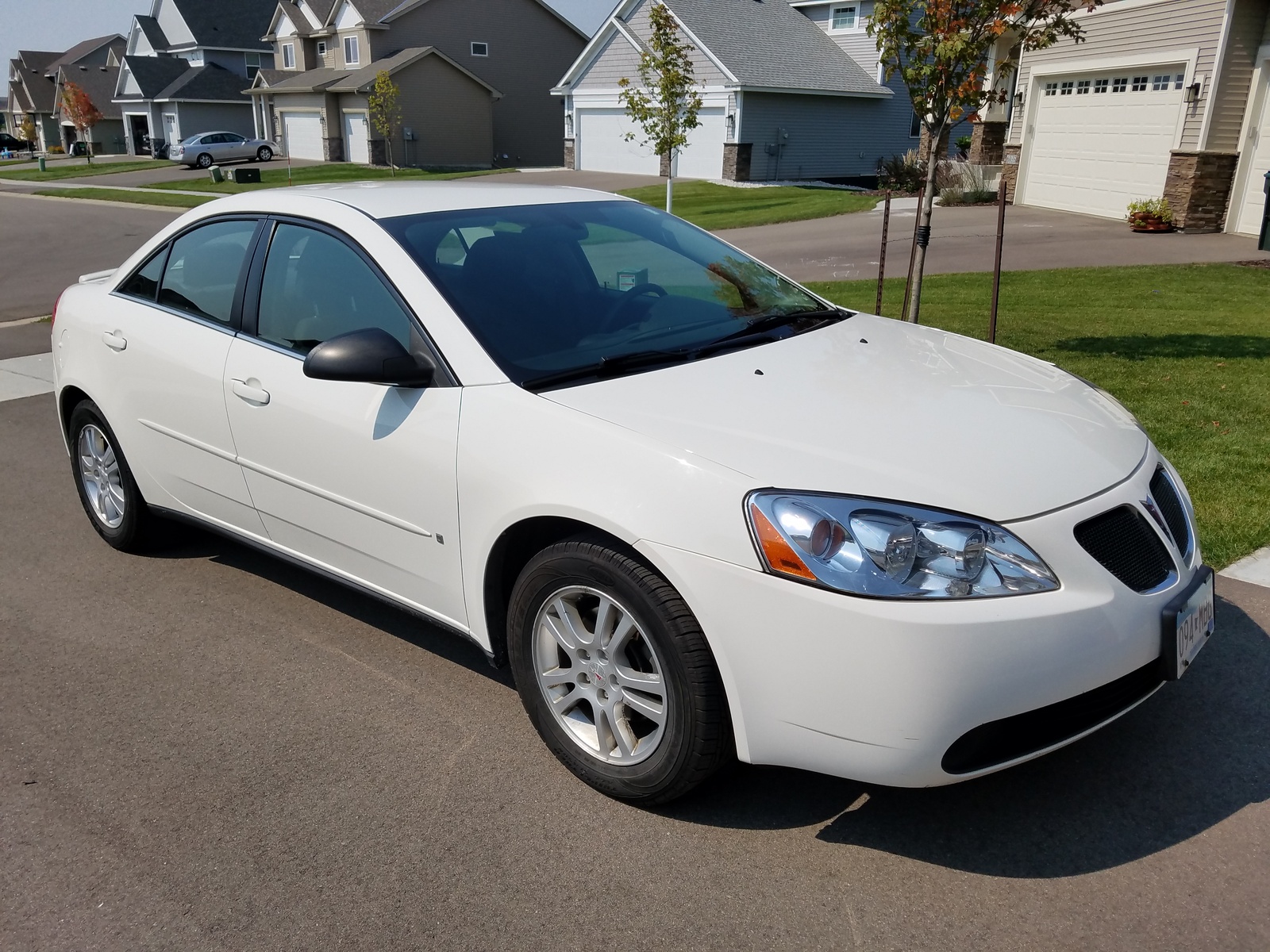 The average family sedan is efficient, reliable, and perfectly inoffensive. If you seek a bit more excitement in your daily commute, the Pontiac G6 is capable of delivering it, provided you select the top-tier GTP trim. The G6 is offered as a five-passenger sedan, but now for 2006, a stylish coupe and a new convertible are available, the latter showcasing an innovative retractable hardtop to combines open-air driving with year-round protection from the elements.

The G6 was introduced for the 2005 model year and is based on the same platform as its GM corporate cousin, the Chevrolet Malibu. Despite its unique variants, sharp styling, and available performance trims, the G6 is generally a middle-of-the-road sedan and is likely to underwhelm the lifelong Accord and Camry owner. But if you have grown tired of the same old options, the G6 is a fun alternative. 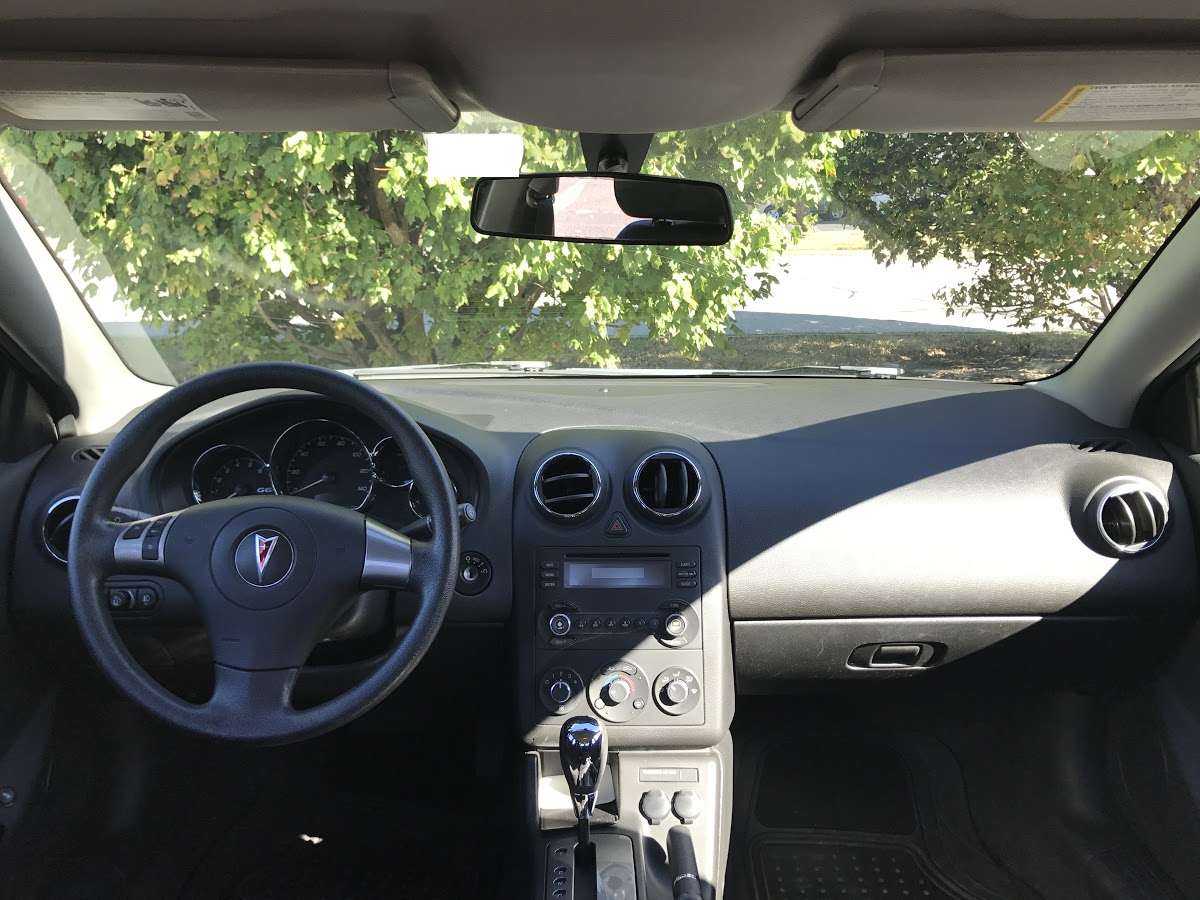 When the G6 arrived in 2005, it did so as a replacement for the Pontiac Grand Am, itself a midsize car with bold styling. The G6 ratchets that up by taking Pontiac styling cues to the extreme. The aggressive headlights are stretched out to the front corners of the car, framing up the brand’s signature twin-intake grille.

The cabin design channels Pontiac’s sports-car persona with a focused layout, a three-spoke sport steering wheel, and a performance-minded instrument cluster. Some trims of the G6 have a clunky four-spoke steering wheel design that detracts from the overall look of the dash.

Though it looks smart enough, the cabin of the G6 lacks a general fit-and-finish that you’ll find in the Camry and Accord. There is heavy use of hard plastics, and those materials that are soft-touch don’t feel up to par. 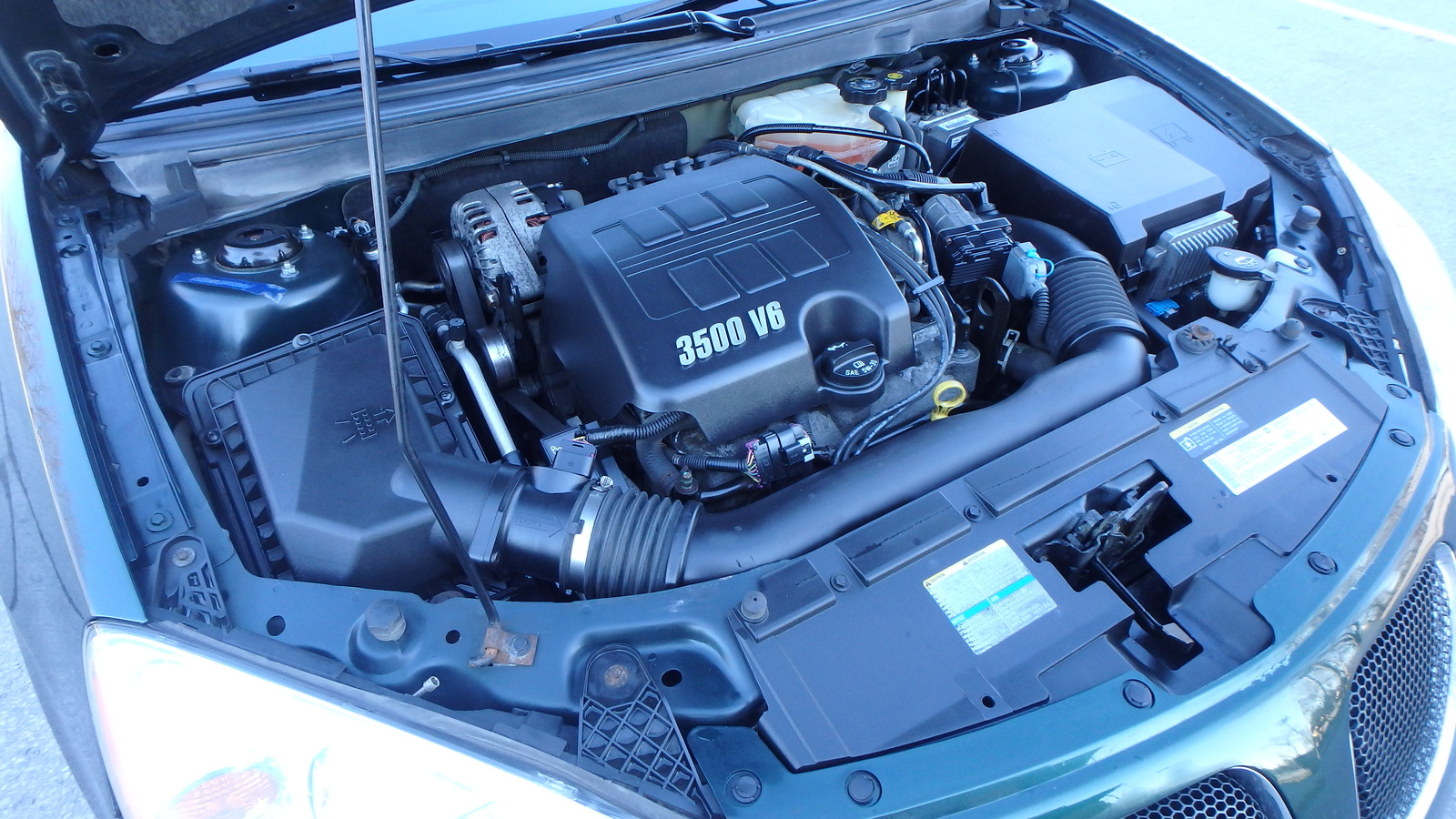 There are three trims of the G6, each defined by their drivetrains. The Base G6 is powered by a 167-horsepower, 2.4-liter 4-cylinder engine, while the G6 GT receives a 201-horsepower, 3.5-liter V6. The top trim is the GTP, and it is equipped with a 240-horsepower 3.9-liter V6. All engines route power to the front wheels through a 4-speed automatic transmission, while the GTP was also available with a 6-speed manual (coupe and sedan only, not convertible).

The 4-cylinder engine is utterly underwhelming, and the 3.5-liter V6 doesn’t do much to impress either. The only engine here worth its salt is the 3.9-liter V6 in the GTP, which provides plenty of low-end power, but will also get up to highway speeds with ease.

No matter which engine you select, the G6 provides rewarding handling characteristics. It’s no sports car, but it is pretty respectable, and it somewhat lives up to Pontiac’s performance heritage. This is further enhanced in the GTP, which receives a stiffer sport suspension 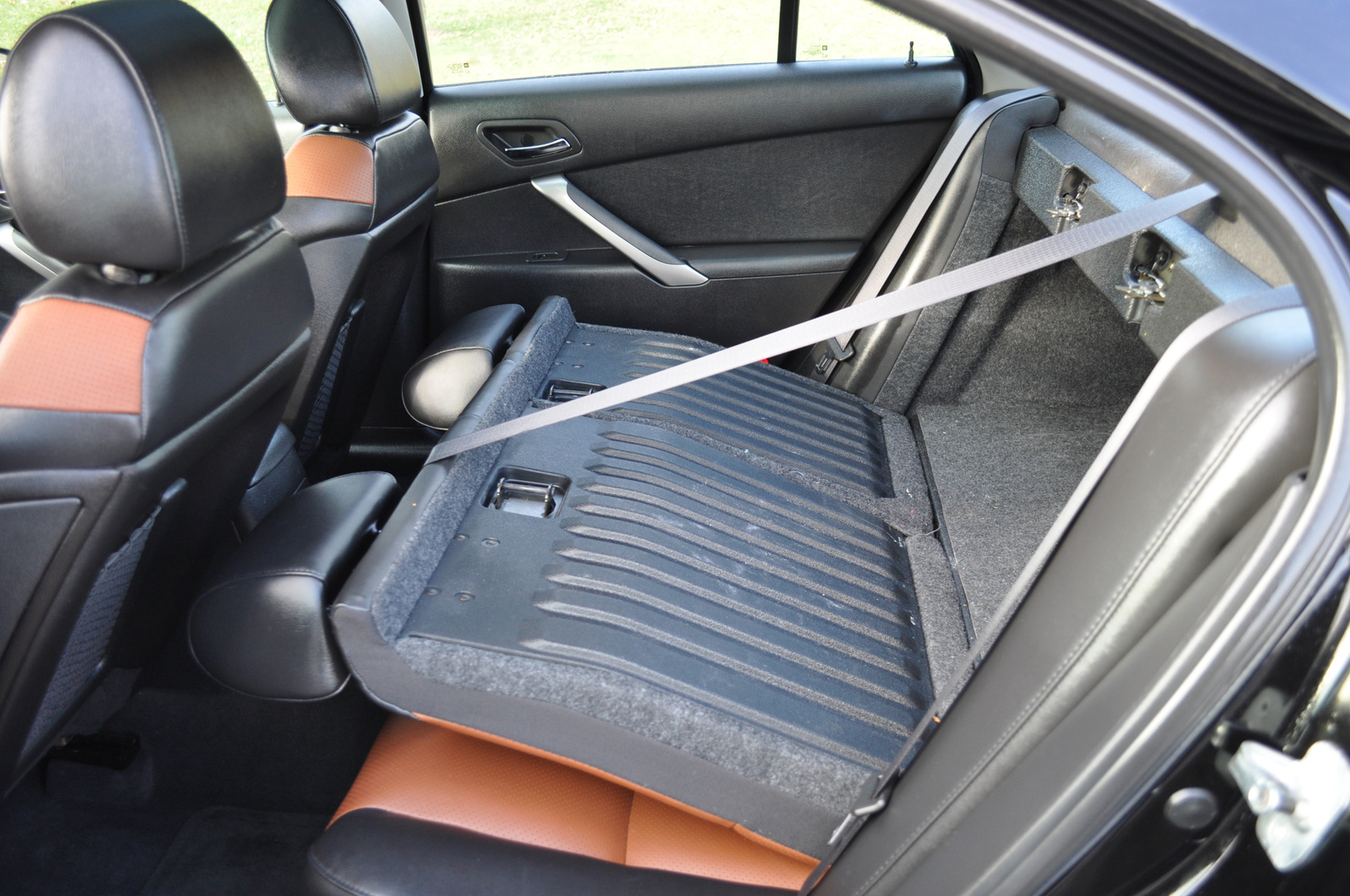 The G6 sedan has seating for five, while the coupe and convertible lose the rear middle seat in favor of a fixed center console with integrated cup holders. The rear seats of the 2-door variants are acceptable, especially for a coupe and convertible, where the expectation is limited usability. If you need true adult-friendly rear seating, look to the sedan, which has plenty of backseat legroom.

The sedan also offers the most trunk space, providing 14 cubic feet. The coupe isn’t far behind, with 13.5 cubic feet. Meanwhile, the trick mechanical bits of the power-folding hardtop takes up quite a bit of cabin space, leaving only 2.2 cubic feet of usable trunk space in the convertible when the top is down. Raising the top will expand that space to a still-paltry 5.8 cubic feet. 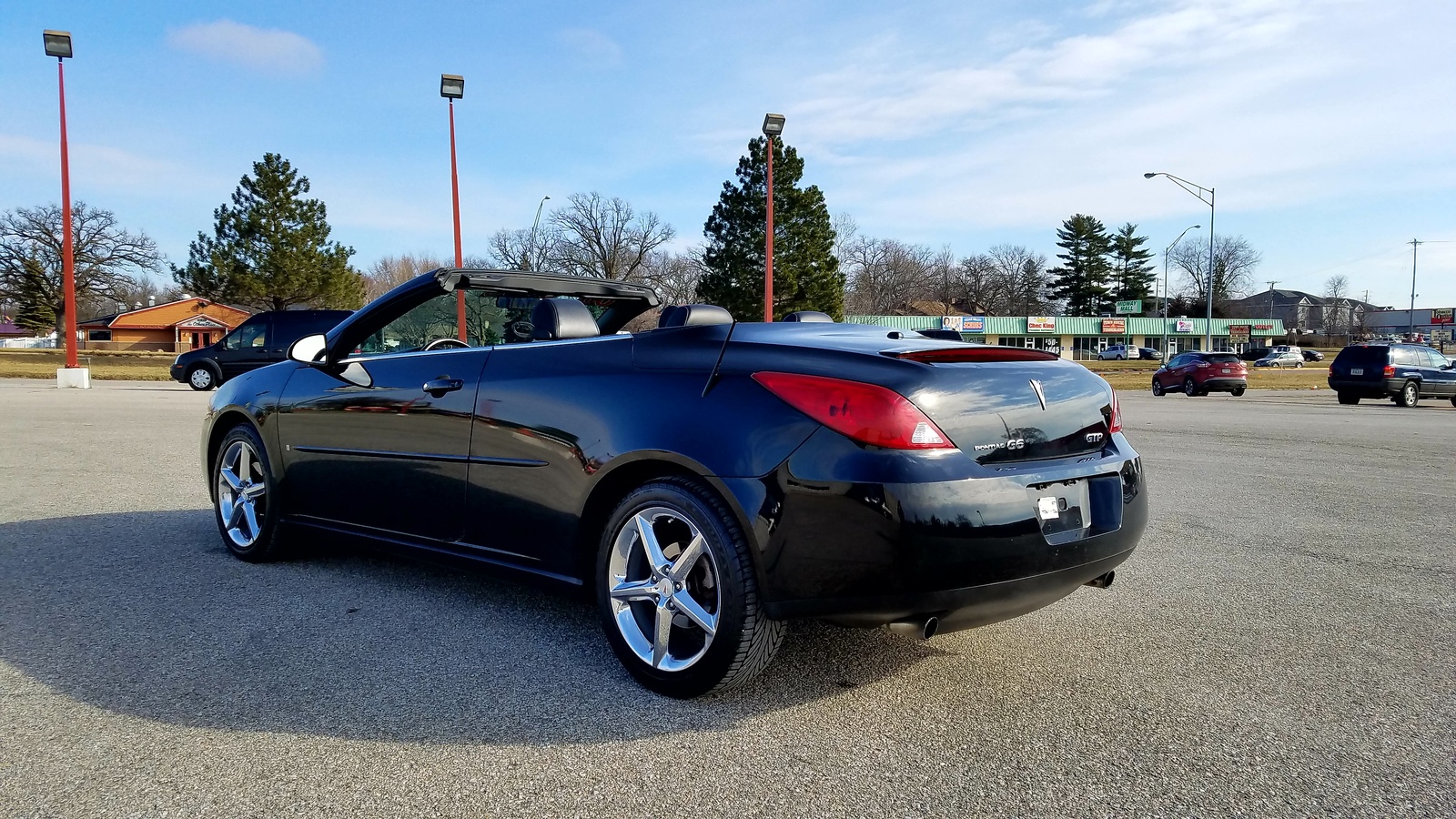 Despite how much real estate it takes up in the trunk when stowed, the convertible's power retractable hardtop is truly something special. It folds like some sort of Transformer, and it stows neatly beneath the rear deck, though it does leave something of a hunchback to the styling.

If you don’t need all those moving parts but still want a bit of fresh air, the sedan is available with a large panoramic sunroof. It should be noted that the components that allow this sunroof to slide aft cuts into rear-seat headroom. 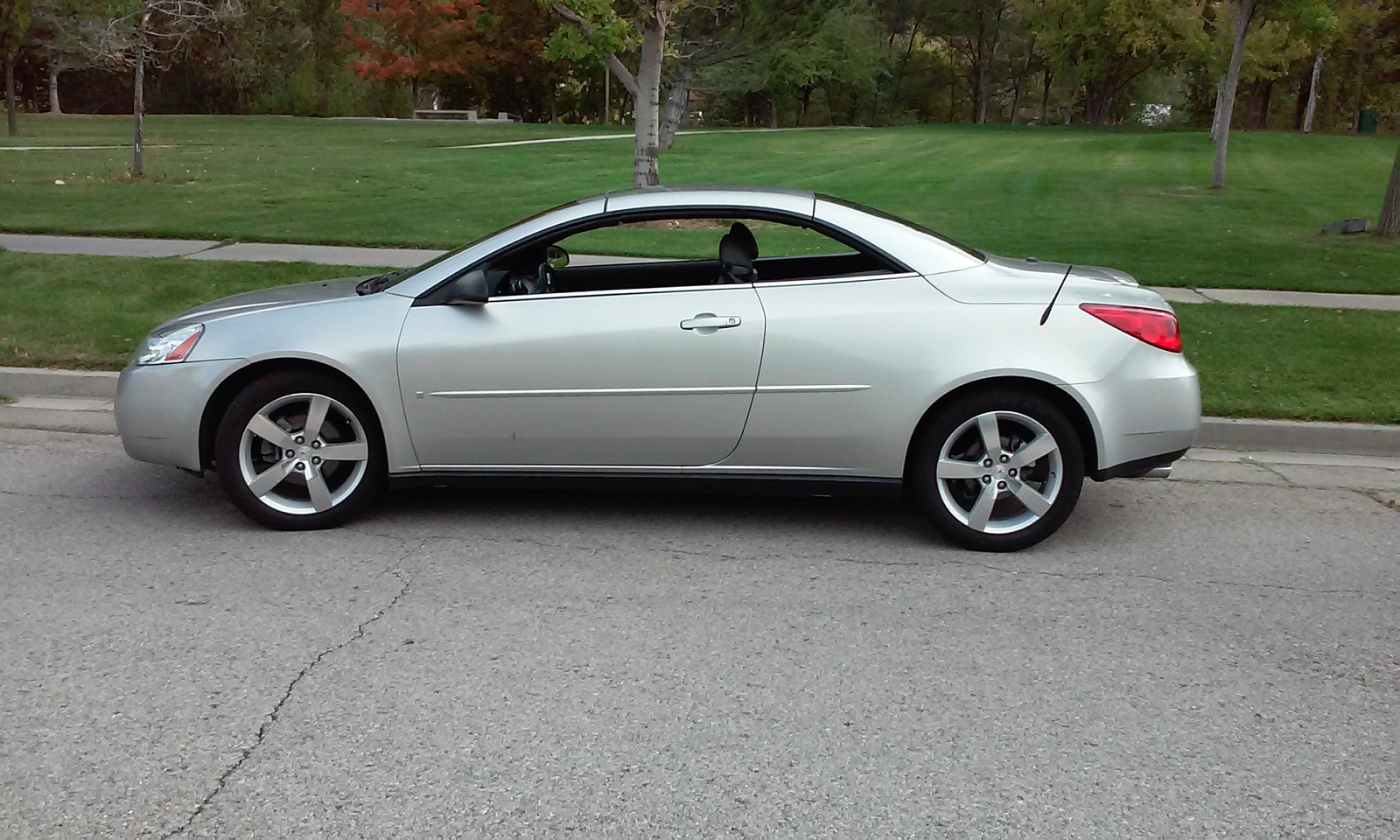 The G6 comes standard with traction control and seatbelt pre-tensioners, as well as front-impact airbags for the driver and front passenger, and a front passenger seat occupancy sensor. Side-curtain airbags and side-head airbags are optional.

It should be noted there are varying levels of traction control, starting with the minimal system in the base trim. The GT features a more robust traction control system, while the GTP features GM’s signature StabiliTrack that has been co-developed with Delphi. 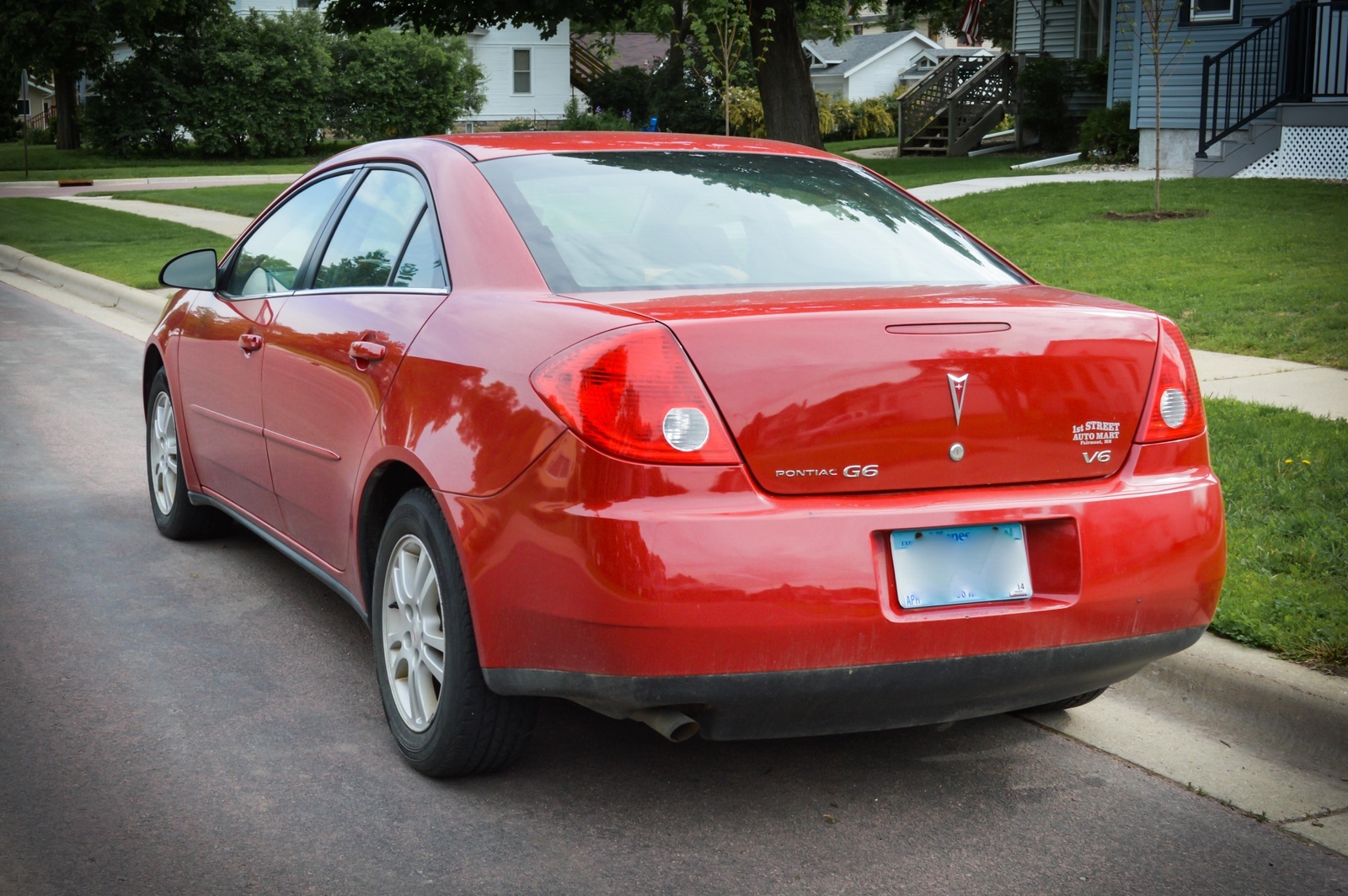 GAZAGAWD i dont know why people are giving good reviews on the 4cyl ecotec.. i dont even drive my car hard and it drinks gas. i done a full tune up changed plugs, fuel filter sensors everything brand new on my 07 g6 ecotec. and it didnt change a thing. i filled up the car in airdre and went to ne cxalgary and back to airdre and burnt nearly half tank. i would love to throw it in the garbage but i know i can get some money for it so im trying to get it the heck out of my life its very expencive to maintian and i am not impressed with Pontiac for making this garbage. i have a 89 pontiac 6000 that i drive to work sometimes and it is by far better on fuel than the g6 and i think thats terrible for a new car concidering the new technology that is out now. so all i have to say is that this car gets MINUS 100 STARS.. DO NOT BUY A G6 THEY ARE GARBAGE!!!!!!! TRUST ME

My Brake Light Is Staying On. What Can And Should I Do To Shut It Off?

All of a sudden the brake light is staying on and there's no problem driving but the light stays on and doesn't turn off.

does a 2006 pontiac G6 3500 have a voltage regulator or fusable link or alternator fuse?. I got new battery & alternator but car still won't hold a charge

After driving my 2006 g6 gtp for a long while after killing it it won't start back up until you let it set for a while. When you turn the key nothing happens except all the lights and gauges come...

Where Do You Add Transmission Fluid

I want to check fluid level