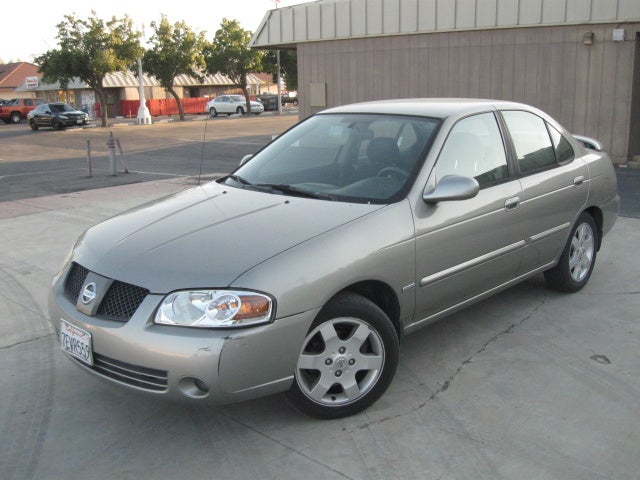 You wouldn't know the 2006 Sentra is Nissan's compact economy car based on its power, performance, and premium features. Though the base model is relatively bare-boned, the other trims pack in a lot of elements of convenience and comfort at an affordable price. For 2006, Nissan makes minimal changes to the Sentra, as it prepares a major overhaul for 2007.

The 2006 Sentra comes in four trims. The 1.8 and 1.8S feature a 1.8-liter, 4-cylinder engine at 126-hp, available with either a standard 5-speed manual or optional 4-speed automatic. The 1.8S is essentially a Special Edition package that adds most of the cosmetic features of the sportier SE-R trims, such as power front seats, keyless entry, a trip computer, foglights, and rear spoiler. The fun and fast SE-R uses the same engine but tuned to get 165-hp and comes only with the auto tran. The SE-R Spec V hits 175-hp with a 6-speed manual transmission and comes with sport seats and Brembo brakes. The SE-R models are standard with ABS brakes, performance shocks, front side airbags, and either 16 or 17-inch tires (to the 15-inch tires on the 1.8 models).

Drivers love the 2006 Sentra SE-R, because it is fast and quick off the line. The detuned engines are adequate, if not quite as responsive. Owners love the comfortable seats, gas mileage, and overall budget savings. Complaints point out the limited rear legroom and the inadequate cupholders that are located too close to the CD player.

mgbme Just purchased a 2006 Sentra s special Edition from original owner. He has done all maintenance with exact records, but only regular stuff, oil changes, rotating tires, plugs etc. Nothing major ever and it runs like a top. should I be worried about doing something like timing belt or water pump if everything works fine???

mgbme It has 182,000 miles and has never been into a shop for anything

peregryne mgbme, you don't need to change out a non-faulty water pump (though if you're already replacing something nearby, it's not a bad idea). however you should replace the timing belt and any other components as recommended by the car's service schedule.

Raphael purchasing a 2006 sentra 1.8 special edition with 55k miles on it for less than 3 grand, regular maintenance done on it, only one previous old lady owner, what should i do to future proof this car?

Users ranked 2006 Nissan Sentra against other cars which they drove/owned. Each ranking was based on 9 categories. Here is the summary of top rankings.

Have you driven a 2006 Nissan Sentra?
Rank This Car

My Car Won't Start When It's Cold In The Morning.

Hey everyone, well I have a 2006 Nissan Sentra SE-R Spec V and I have had problems with it since I first got it. When it's cold in the morning, when I haven't driven the car for about 4 hours, the c...

What Could Cause My Car Running Rough And Having A Cyclometer 3 Misfire?

Every few months, especially if my car sat without driving it for a few days, it runs very rough shaking a lot and when I give it gas it doesn’t want to go. I replaced the crank shaft sensor twice,...

I have a 2006 Nissan Sentra 1.8s that I bought back in February. It has manual lights that I turn on with the left control stick (I am not knowledgeable of cars or of their terminology). I have a qu...

06 Nissan Sentra, cranks but no start, replaced fuel pump, cam sensor, crank sensor. Any suggestions? Don't want to dump a ton of $$ into a winter beater

just yesterday my ac was ice cold, and last night i was adjusting the temp to make it a little warmer and nothing was happening so i put it to full hot and heat began to blow out but now it seems to ...