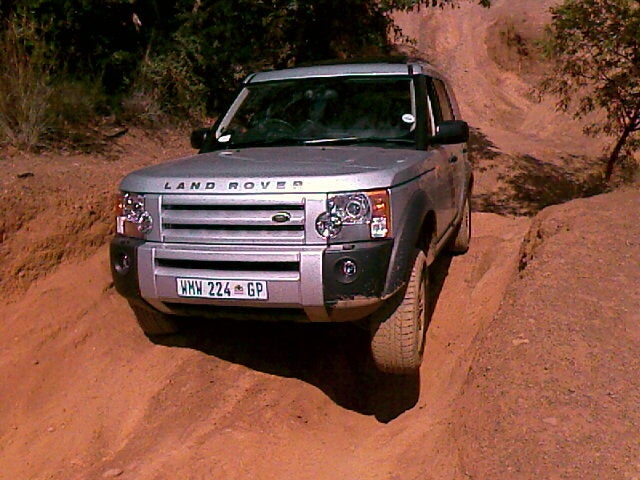 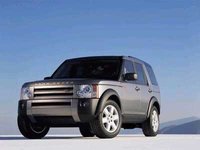 The Land Rover LR3 a carry over for this second year of production, but the upper level HSE trim adds a flat-folding third row seat to the standard equipment roster. The mid-size SUV was introduced in 2005, serving as a replacement for the long-running Discovery. The LR bares many resemblances to its rugged, but family-oriented predecessor, but it has grown larger, more powerful, and more modern.

A base SE is powered by a 4.0 liter V6, which makes 216 horsepower and 269 pound-feet of torque. The HSE houses a 4.4 liter V8, good for 300 horsepower and 315 pound-feet of torque. Both engines are paired with an adaptable six-speed automatic transmission which includes a manual shift gate. Mixed driving fuel economy is estimated in the mid-teens (mpg) for both power plants. The V8 HSE will tow 7700 pounds.

The LR3 has been praised by both owners and reviewers for Land Rover's advanced suspension, which allows for a well-cushioned cruise on the road , or a stable and controlled adventure on the trail. The LR3's luxurious and well-appointed interior is also quite functional. The spacious rear quarters allow for ample storage, thanks to flat-folding second and third row seats. The cabin also includes several strategically placed stowaway compartments. Reviewers agree that the new LR3 is the class leader in the mid-size luxury SUV segment.

The bulky LR3 does not offer much low end power, but the engine is quite capable when it comes to passing and merging in fast-moving traffic. Unfortunately, the very tall SUV has a rather top heavy feeling when driven aggressively. The LR3 ride quality is also praised, thanks to powerful brakes and a well-cushioned ride. Test drivers did report some floating and bobbing over uneven surfaces.

The LR3 also offers a class-leading interior environment. The second and third row passengers enjoy a level of comfort comparable to those in the front. Both rear row fold flat for ample cargo space. Although the cabin is certainly plush and luxurious, the ergonomics seemed a bit antiquated to many reviewers. Some frequently used controls are either too small or difficult to operate.

As a Land Rover, the LR3 stays true to the elegant reputation. Both V8 models come with power front seats, sunroof, and leather upholstery. The HSE adds surround sound, xenon headlights, rain-sensing wipers, and a navigation system with topographical map features. The 2006 LR3 is versatile for families wanting smooth in-town comfort and maneuverability as well as weekend warrior or camping adventures. Owners love the roomy interior and cargo space, off-road capability, quite ride, the flat-folding seats, and the easy driveability. There are complaints that the controls are out of easy reach, the transmission can feel jerky, and the fuel economy is in the low teens. Many drivers report major electrical problems and poor reliability.

Miguel My 2006 LR3 HSE is my first Land Rover, I bought it from a used car dealer out of town, with about 87k miles on it, with some hesitation based on the many posts about reliability. But the dealer was honest, the price was good, and on paper the truck was exactly what I needed. After 60 days, and about 4k miles, I am so happy I made the leap. There is so much capability in the basic platform of this truck, it does so much -- yes it is a complicated beast and if things go wrong you will pay -- but you are able to do things with it that are hard to imagine with other SUV's, both on-road and offroad. I put a flat deck on the roof, and a ladder on the back, and use it now in my photography business as the world's best mobile tripod. Putting a wind-faring on the front of that deck also restored cabin ambience and improved highway gas mileage, allowing it to be comfortable for tours and outings as well as on the job. It is huge inside, but not ponderous in driving or handling. It's no Audi Q5, but it can go places and traverse ranch lands that I could not access without it. Comfortable interior, great visibility, ride quality. No mechanical issues so far. There are occasional unexplained glitches -- Satellite or GPS/NAVI system is occasionally offline but restores itself. And the OffRoad Navi is very helpful with altitude and compass indicators for the work I do. The LR3 looks great in white, cleans up well, and brings confidence behind the wheel in any situation. I get it. I'm a fan.

My Landy will not start. I parked her 2 hours later I wanted to start her. She sounded like she had just taken so I put foot on acc pedal prematurely . Now engine turns but will not start. The b...

hello a short time ago I replaced the engine to my land rover lr3 2006 after that I do not want to start and placed new chains of time and everything was properly done I do not know what went wrong...

How Do I Get The Hood Open When The Cable Broke