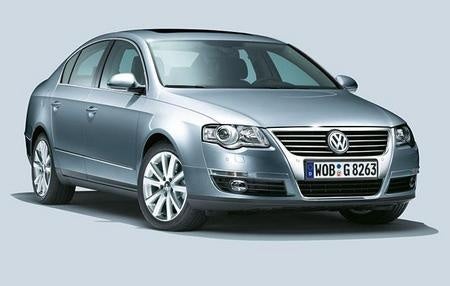 In anticipation of a redesign in 2006, Volkswagen made few changes to the Passat sedans and wagons for 2005, other than dropping the top-of-the-line 8-cylinder W8 and moving a few standard features around a little.

Standard features for the Passat GL included air conditioning, power windows, power door locks, anti-lock brakes, traction control, front and side airbags, and an audio system with cassette and CD players. The GLS added a sunroof and alloy wheels, while the GLX added leather seats, which were heated in the front, among other features. VW's 4MOTION all-wheel-drive system was available on certain GLS and GLX models.

Overall, drivers' impressions of the 2005 Volkswagen were favorable, with the car's handling, power/performance, safety features and fuel economy being cited as positive points. However, quality issues crept in again, with some drivers noting that their cars required frequent and expensive repairs.

What's your take on the 2005 Volkswagen Passat?

EricGray This is the worst car I have ever owned. Is there anything that doesn't break on this car? Headlight adjustments broke. They are very dim anyway, even with new bulbs. Heated seats malfunction - The driver's side burns your butt and will melt the vinyl if it is left on. The passenger side doesn't work. Secondary air system - The cheap "plastic" hose broke. Rear door lock actuator broke. Keyless entry malfunctions - The problem is with the electrical connections in the car, not the actual remote. Window switches malfunction - They get stuck. The contacts wear out on the switch. The engine leaks oil - Every gasket leaks. I repeat...EVERY gasket leaks. I just had them all replaced. Two years later...leaks, leaks, leaks. Engine coolant leaks. Where? IDK. I can't find the leak, but it leaks. The automatic transmission shift lever gets stuck sometimes, and the transmission shifts strange. The CV Joints and ball joints went bad. The AC fan quit working. The interior trim is painted plastic? It peels off. - I'm sure that more will break soon. Stay away from 1998 - 2005 Passats.

Users ranked 2005 Volkswagen Passat against other cars which they drove/owned. Each ranking was based on 9 categories. Here is the summary of top rankings.

Have you driven a 2005 Volkswagen Passat?
Rank This Car

How Do I Replace The Refrigerant Hose?

My daughter ripped a hole in the refrigerant hose/pipe that runs between the evaporator and the condenser. I need to replace that hose but don’t know how to access it. Do I have to remove the fron...

Hi guys, I have Volkswagen Passat B6 and I am guessing if the transmission solenoid may be the problem here. After starting Limp mode occures. All PRNDS are lit and I am unable to shift to Revers...

VW Passat - We Can't The Key To Go Into The Ignition!

We have a 2005 VW Passat, and can't get the key to go INTO the ignition. It was fine yesterday, my husband drove home from work as usual. This morning, the key won't enter the ignition. We tried my ...

Yesterday i went into a bumb and after 3 hours my coolant tank got empty i putted 300ml of coolant it came back to level again but today again it dropped. I cant see any leaks because its snowing a...

I bought a 2005 Passat 1.8T, about 1 year ago with 40k. Ive always changed the oil on time with full synthetic as recommended, never beat it and have never been low on oil. This light came on and t...