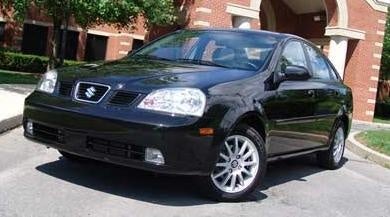 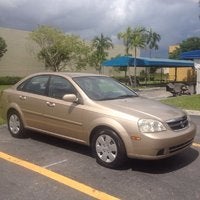 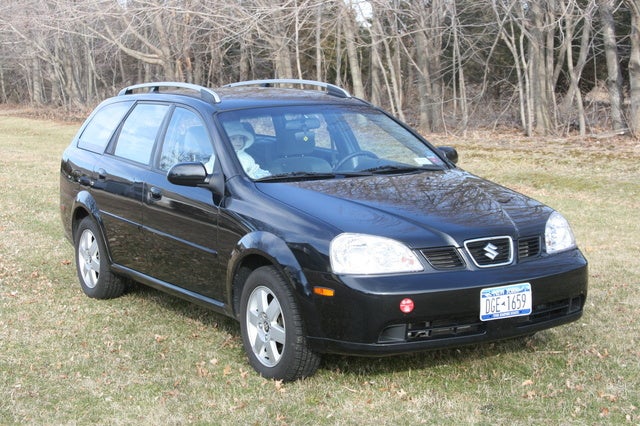 A starter car loaded with upper-end features, such as wheel-mounted audio controls, a CD player, full power setup, and heated mirrors, the compact 2005 Suzuki Forenza represents a good value purchase for young buyers who don't want to sacrifice convenience. Touting itself as the roomiest compact (its rear shoulder room surpasses the Corolla, Sentra, and Civic), the 2005 Forenza is also a decent family car. Joining the sedan this year is new wagon, with a cargo bay that stars at 24 cubic feet and expands to 62 with the rear seats folded down. The sedan also has fold-down seats and a trunk that starts at 12 cubic feet.

Also new for 2005 are standard front-side airbags on all three trims. The S, EX, and LX are powered by the same 2.0-liter, 126-hp I4 engine with standard 5-speed manual or optional 4-speed auto tran. While the base S is well-equipped, the LX adds cruise control, foglights, and a sunroof, and the EX goes a step further with leather seats. ABS brakes are optional. The dash is trimmed in plastic and metal accents, and standard manual height and lumbar adjustments for the front seats help ease the ride on long trips. The compact size means it is nimble around city streets, though the I4 engine does struggle on inclines.

Another attractive value feature is the 7-year/100,000 mile warranty, but most owners have found their 2005 Forenza reliable. It gets four stars in crash ratings. The biggest selling point is its standard base model features for a lower price point than competitors. Drivers also say the seats are comfortable, the ride smooth, and handling top-notch. The surprising downside is a 22/30 mpg, which falls short of other compacts on the market. Acceleration with the I4 is labored and can be noisy.

What's your take on the 2005 Suzuki Forenza?

Have you driven a 2005 Suzuki Forenza?
Rank This Car

Is It Worth Replacing Or Rebuilding The Engine In An 05 Forenza?

Car is otherwise in decent shape

I crashed my car, no damages but it won't start, i need to know where the fuel cutoff switch is at

My 2005 Suzuki Forenza Station Wagon Shut Down On The Highway And Will Cran...

My 2005 Suzuki forenza station wagon turn off going down the highway and will crank but not start. I do know my fuel pump is working and I don't know what to try next