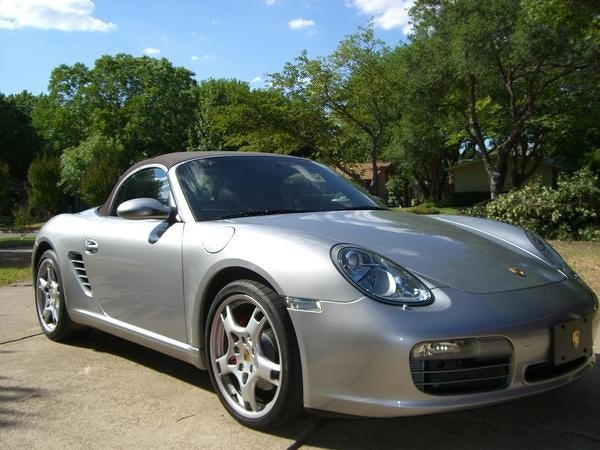 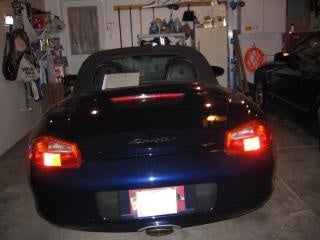 For the first time since its introduction nearly ten years earlier, the 2005 Porsche Boxster two-seat roadster received a full redesign, which included not only updates to its exterior and interior styling, but more powerful engines and updated transmissions as well.
That said, the changes to the Boxster's exterior styling were far from revolutionary. The roadster's nose, side intakes, side sill, headlights, and taillights were all tweaked, and Porsche carried a number of structural and electronic elements over from the more powerful and much more expensive 911.
The new engine dropped under the hood of the base Boxster was a 240-horsepower, 2.7-liter horizontally opposed six-cylinder (up 12 horsepower from the previous year), while the more powerful Boxster S received a 3.2-liter horizontal six-cylinder engine that produced 280 horsepower (up 22 horsepower). Both engines are located behind the passenger compartment but ahead of the rear axle, hence the mid-engine designation (one of the few such vehicles in the country).
The base Boxster came with a tighter, more precise five-speed manual transmission as standard equipment, while the Boxster S was equipped with a six-speed manual transmission. A five-speed Tiptronic S automatic transmission, with a gate for manual shifting, was available as an option for both models.
Standard features for the Boxster included air conditioning, power windows, power steering, power door locks, leather seats, a leather-wrapped steering wheel with a tilt/telescoping column, a trip computer, power heated exterior mirrors, an anti-theft alarm system, cruise control, and an AM/FM stereo system with a CD player.
Anti-lock brakes, traction control, stability control, front fog lights, a rear spoiler, and 17-inch wheels were also part of the package.
In addition, the Boxster was equipped with a lightweight, sound-insulating convertible top with a heated glass rear window.
Drivers found a lot to like and very little to dislike about the 2005 Boxster. Handling, power, styling, interior appointments, clever storage spaces, the improved shifter, a tigher suspension, and even fuel economy were all praised by drivers. The stereo system and vision out the rear with the top up were among the areas of improvemen suggested by drivers.

What's your take on the 2005 Porsche Boxster?

MDX_200517 The 2005 Boxster is truly a solid, fun car to drive....and the build quality is rock solid....mine is 12 years old and feels like a new sports car....can't thank Porsche enough for providing such a terrific, affordable convertible to America! the only downside is mpg is on the low side....premium gas 16mpg.....

Users ranked 2005 Porsche Boxster against other cars which they drove/owned. Each ranking was based on 9 categories. Here is the summary of top rankings.

Have you driven a 2005 Porsche Boxster?
Rank This Car

How Do I Sign Up For The CarGuru Pay Service? I Don't See A Link.

I am interested in this car and would like to talk to sales rep. Travis about this vehicle.

My heater doesnt work, the fan is Ok

05 Boxster Won't Start Even When Jumped From Good Battery

My 2005 Boxster has a very weak, defective battery that I need to replace, but today when I tried jumping it from my other car (M-B CLK 320 with good battery), it wouldn't start. Just made a repeti...

Contracting With Your Service To Handle The Transaction

I think that I have a buyer for my 2005 Prosche Boxster S, pending inspection by a Porsche dealership. Assuming everything goes well, what do I do to contract with your service to handle the paperwork...