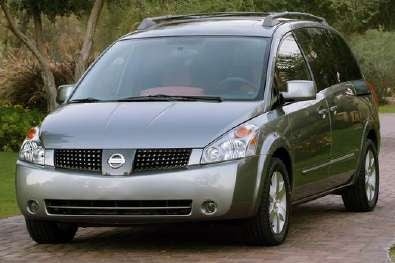 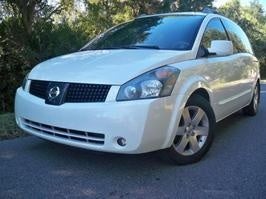 Minivans are the cars we hate to love. Every family wants the space and versatility, but nobody wants to be saddled with the conservative soccer mom label, that's become so uncool nowadays. The 2005 Nissan Quest is a minivan that tries to reinvigorate the minivan segment, with sleeker lines and upscale looks, as well as a good deal of power under the hood.
The big addition to the 2005 Quest is a new base model with less features and less of a price tag than the existing S, SL, and SE trims. All have a 3.5-liter, 240-hp V6. The base and S come with a 4-speed automatic, and the SE and SL feature a 5-speed auto tran. Also new for 2005, the S trim gets more standard features now that it's no longer the entry level Quest. These include a power sliding passenger door, a power liftgate, a roof rack, and a rear obstacle sensor. For all Quests, an anti-theft system is standard, and a new adjustable armrest is added for the front seat.
The Quest features three rows of seating. Both the second and third rows fold completely flat, laying out a cavernous storage space. An optional seat package replaces the second row bench with bucket seats, for more comfort. Dual sliding doors that open wide provide easy access to all rows. In the top-end SE trim, both doors are powered. The instrument panel sits high in the center of the dash instead of behind the wheel.
The 2005 Nissan Quest has a lot of good points, according to owners, but an equal amount of disappointments. Highlights are its V6 power and acceleration capability, its car-like handling which makes it easy to drive, a sleek, sporty look, and the vast amounts of leg and headroom. Drivers also like the way the dash is laid out and that both rows of seats fold flat. But they also report problems with the power windows and a lot of rattling coming from both the sliding doors and the cheap plastic dash. They wish there was a 60/40 split-fold option for more flexibility in seating and storage.

Users ranked 2005 Nissan Quest against other cars which they drove/owned. Each ranking was based on 9 categories. Here is the summary of top rankings.

Have you driven a 2005 Nissan Quest?
Rank This Car

How To Quiet Lifter Tapping On 05 Nissan Quest?

My 05 Quest has a loud tapping noise from the engine compartment. The noise does not stop until the engine is off. Multiple visits to various Nissan and independent repair shops all point to faulty ...

Can I take the second row bucket out completely?

my nissan quest 2005 i replaced the alternator and battery. i also did my spark plugs and 3 of my coils. i just recently drained the transmission oil and put in 6 qts in it. i let it run for 20 mins...

Rear Door Wont Open From Outside

After a snow storm, the doors freezed. Now that the doors all unfroze, the rear sliding door still wont open from the outside however, it can still open and close properly from the inside. How can ...

Hi, I have a 2005 Nissan Quest that stall within 15 seconds of starting. A month ago, engine was misfiring and mechanics replaced ignition coils. Also a valve cover oil leak was found but they ...