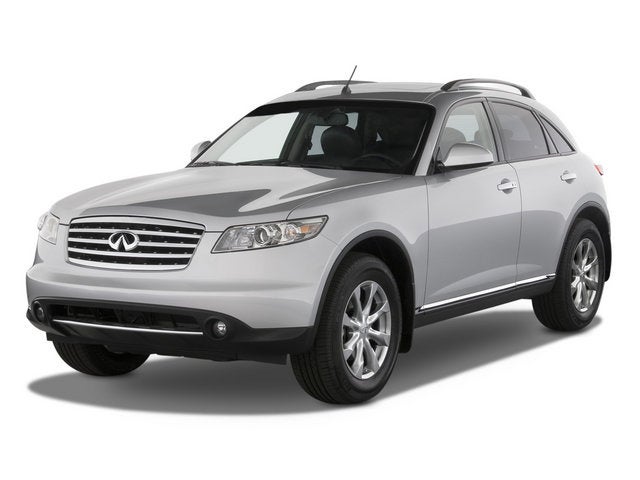 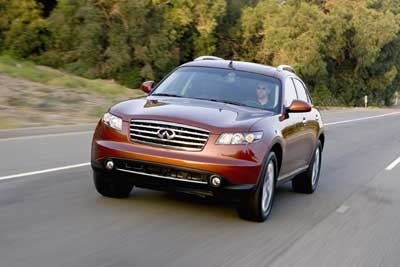 The FX 35 crossover SUV returns largely unchanged for the 2005 model year, but Infiniti has added a few items to the options list. New additions this year include a lane departure warning system, Intelligent Cruise Control and Infiniti's Intelligent Key.

The FX is powered by a 3.5 liter V6, which generates 280 horsepower and 270 pound-feet of torque. The V6 is paired with a five-speed automatic transmission. This small SUV will tow 3500 pounds, and fuel economy is estimated at 17/23 mpg. An all-wheel drive variation is available, and the two-wheel drive FX is RWD.

Owners have praised for the FX 35 for the generous selection of options, including a rearview camera, Intelligent Cruise Control, and navigation system. Other favorite features include aggressive styling, sports sedan-like handling, and the powerful audio system.

Reviewers suggested that the navigation system could be more user-friendly, with additional features like a touch screen and voice recognition. Gas mileage was another common complaint among drivers, and cargo space is a bit tight due to the low roofline.

rachel Its a nice car had it for four yrs,zero problem

zephus We’ve had this car since 2008 and we’re now at 185K miles. Our unit has sensitive electrics: it chews up batteries and I’ve replaced 7 ignition coils. The electrics also affect the passenger power window. It won’t go up if the engine is not running. It’s irritating, but something I simply put up with because I LOOOOVE the way it drives. There’s nothing like it, it’s basically a Nissan 350Z on stilts. The infotainment is dated and there is no bluetooth, but the seats are really excellent, and the sound system is pretty good. I believe this car will become a classic in another ten years or so. I’m gonna keep driving mine until the wheels come off.

What Is The Cost Of Delivery From CarGurus

My 2005 fx car radio recently stop working. It will not read/play any cds. I took in to the dealer and they told me that they would have to replace it not giving me a real explaination as to why it ...

I went and got a oil change and the next day I transmission went out, is it possible they drain my transmission better than drain the oil out of my engine?

My car wont start any ideas what can I do or check to make it start.